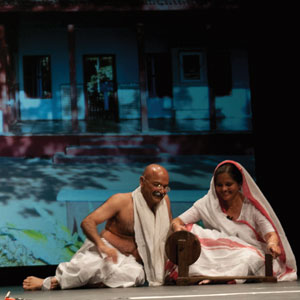 (Photos here and below: Bhushan Mocherla)

Emcee/ program director Ms. Krishna Kesavarapu welcomed all and invited India American Cultural  Association Chairperson (IACA) Padma Rallapalli to give a brief history of GFUSA: Founded in 1997, GFUSA points out the link between Gandhi and MLK, Jr. and promotes their messages of Peace and  Nonviolence. The Gandhi statue, facilitated by the National Federation of Indian American Associations (NFIA) along with partner organizations and donated by Indian Council for Cultural Relations (ICCR) /Embassy of India, was installed and dedicated at the Martin Luther King Jr. National Historic Site on January 24, 1998 by former Ambassador Andrew Young, the late Giriraj Rao, and many others. This historical stagepiece “Gandhi” was a fundraiser to undertake a feasibility study for a planned Gandhi Center and Gandhi Institute, described by GFUSA Chairman Subash Razdan as the third leg of a triangle of peace in metro Atlanta, along with the Carter Center and King Center. “Timing of the staging of “Gandhi” was  coincided with King week/birth anniversary as a fitting tribute to Dr. King as well,” said Razdan.

Mayor Eva Galambos of Sandy Springs noted that “tomorrow when we observe M.L.K. Day, we will remember Gandhi Foundation’s mission of promoting King and Gandhi’s philosophy.” Council Member Karen Richardson from the City of Johns Creek also expressed her appreciation.

Consul General Ajit Kumar provided memorable remarks: “We invariably recall Gandhi’s message when
we are faced with events and choices that leaders and people make in response to challenges when changing
course. ... Gandhi bequeathed to us three guiding principles—the trinity of ahimsa or non-violence, satyagraha or truth-force, and sarvodaya or the upliftment of all. It is the value of these principles that we have to rediscover if we want to live peacefully in today’s world. .... Intolerance is a form of violence. Nonviolence is the greatest force at the disposal of mankind. It is mightier than the mightiest weapons of destruction devised by the ingenuity of man..... Gandhi gave a simple way to judge our actions when
in doubt. He said: ‘...apply the following test: Recall the face of the poorest and weakest man you have seen and ask yourself if the step you contemplate is going to be of any use to him.’” He spoke of M.L.K. Jr.’s trip to India. “In a radio address made during his final evening in India, he reflected, ‘[Gandhi’s] principles are as inescapable as the law of gravitation.’”

He continued, “I would also like to quote President Obama on what he conveyed through his message on the occasion of Gandhi Jayanti in 2009: ‘Americans owe an enormous measure of gratitude to the Mahatma. His
teachings and ideals, shared with Dr. Martin Luther King Jr. on his 1959 pilgrimage to India, transformed American society through our civil rights movement. The America of today has its roots in the India of Mahatma Gandhi and the nonviolent social action movement for Indian independence which he led.’”

Concluding his speech, he emphasized the relevance of Gandhiji’s thoughts: “The power of peaceful means to seek justice; the effectiveness of non-violence in countering force; respect for diversity within and between societies; fighting social prejudices and promoting social reforms; conservation of nature; probity in public life; and simplicity in personal life are enduring ideas that can help us address many problems of the contemporary world.” 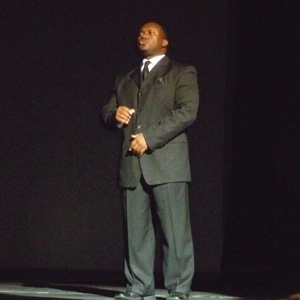 Giving a brief overview of the play, Ms. Kesavarapu explained that the drama is an educational event on Gandhian philosophy. The script was developed based on research of many writings of Martin Luther King, Jr., Gandhi, Jinnah, Paramhansa Yogananda, and original audio and video clippings. Thirty-three actors, some with multiple parts, spent six months preparing. The show opens in February 1959 with Martin Luther King Jr.’s visit to a school in Kerala, where the Principal introduces him to the Dalit students as “a fellow untouchable from the USA.” At first King is shocked, but then, thinking of the plight of the blacks in the USA, he agrees. King, played by Barry Carter, becomes the narrator of the play. Carter, with his statuesque demeanor and forceful delivery, was the image of King and played his role to perfection. 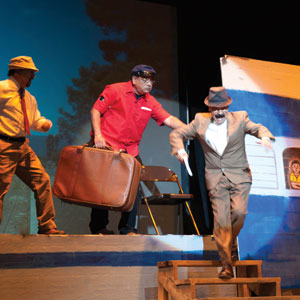 Sixteen scenes then take the viewer from 1890s South Africa to 1948 India. Swaroop Nyshadham commands the stage throughout with his stellar performance as Gandhi. The audience is able to witness the infamous incident when Gandhi was thrown out of the train in South Africa: in surprise, he pronounces it “unchristian” and decides to fight against the unjust apartheid. (The use of a moving train carrying actors onstage is a truly striking beginning). 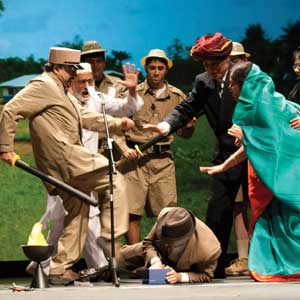 Scenes then depict Gandhi beaten for burning passes, telling a journalist that “without a paper you cannot unite a community,” asking Kasturi Ba for a cup of tea for the driver, exhorting her to take a turn washing the latrine, fighting the Smuts Law in South Africa, working for the farmers in Champaran, burning British manufactured goods (again with striking stage effects), and stating that “for this cause I am prepared to die, but there is no cause for which I am prepared to kill.” Depicted are the Jalianwala Bagh massacre, Mirabehn’s arrival in Sabarmati, the Dandi March (reported graphically world-wide by American correspondent Webb Miller), and the visit of American photographer Margaret Bourke-White from Life magazine. 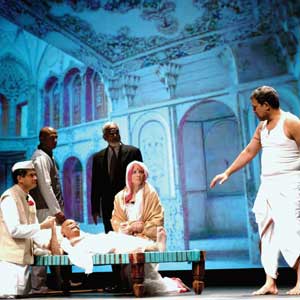 There were light moments in amusing exchanges between Gandhi and Kasturba, and many touching scenes as when the Hindu father enraged with grief could listen to Gandhi and receive advice on bringing up a needy Muslim boy as his own and even as a Muslim. We saw Gandhi breaking his fast after learning that the rioting between Hindus and Muslims (causing heavy casualties in both communities) had stopped; Jinnah feeling insecure about Muslims in India after British leave and demanding separate homeland for Muslims; and the climactic ending when Gandhi was shot by a distraught Hindu over the dismembering/partition of India. The two and half hour play passed quickly, interest never flagging.

Similar stagings are planned in other cities in the USA where Gandhi memorials have been established. It is to be hoped that more Americans can attend, for there are ties not only with MLK Jr. but with Emerson and
Obama, and there are numerous references to Christianity. The scene with the father, for example, has the feel of a parable, and the fact that the grieving man could listen and change his mind could represent both what Gandhi was striving for then and what some are still striving for today: using nonviolent  noncooperation to bring light to bear on problems, change people’s minds, and rout out injustice.