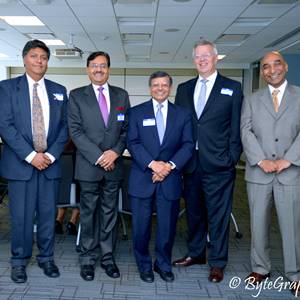 The half-day conference "Business Success with India - Best Practices" was hosted on October 7, 2014, at Ernst & Young’s Atlanta offices. A balanced view was presented of opportunities and impediments to opening markets and international investments, which the newly elected Prime Minister Modi's Government is racing to review and improvise.

Breakfast and networking preceded the welcome by Viren Mayani, President of the Georgia Indo-American Chamber of Commerce. He listed events hosted by the Chamber in 2014 and announced that GIACC has partnered with Technology Association of Georgia (TAG) for a discussion on November 4 on “Global Business Collaboration.”

Miller Williams of Ernst & Young – D.C. was responsible for setting up this event and has spent many years visiting and understanding India’s international business climate. He delivered his message with a hammer’s impact, full of data, as the findings spoke volumes on the tax restrictions imposed on US businesses interested in making sizable investments in India. Experienced in dealing with tax commissioners in Delhi, he decried the marketed intent of desiring Foreign Direct Investments on one hand and on the other, the hard lined rule of the Indian Tax Authorities, taking away the wind under the wings of international business.

Ameet Kapoor, a previous IRS officer from California, now in India with E&Y, lobbies for Transfer Pricing Reforms in India for business between our two great nations. He confidently states that it is not a stale-mate situation. He spoke of on-going improvisations and small changes in the tax code as well as its perception, and what giant opportunities lay ahead.

Dr. Govind Hariharan of Kennesaw State University’s Coles College of Business and Executive Director of the India-China-American Institute (ICA) spoke states competing for international businesses to open shops in their state versus another. They succeed by offering negotiations for the transfer pricing valuation methods. Hariharan stressed the importance of State Chief Ministers who are business focused and compete regionally to secure their interest; hence it is perilous to generalize that the Transfer Pricing impact is consistent throughout the nation. Some States are more welcoming than others, he pointed out. Govind is also responsible for bringing a delegation of more than 200 young revenue agents to Atlanta for training them on the harmful impact of rigid Transfer Pricing policies that need a major overhaul. By reaching the actual personnel involved in issuing Business Licenses, there is a bigger hope for change than discussing with policy makers alone.

Samit Shah of E&Y spoke of India’s treaty with Mauritius, which has become a tax heaven through which international companies route business with India. He shared that Japan is one of India’s leading trading partners and the policy arbitrated between the two will form the threshold of all other international business treaties between India and foreign nations, including the USA, which is becoming a large trading partner for India.

Hon. Consul General Ajit Kumar spoke of the multi billions of dollars committed by India to Defense, Infrastructure Changes, Education, and more. He spoke of India seeking US expertise on energy: nuclear and natural gas. In a couple of years, the USA will be exporting large quantities of natural gas to India. Kumar also spoke of the rock star welcome Prime Minister Modi received in New York and Washington, and quoted from Modi’s speech, which was very business-friendly.

Dr. Jag Sheth, Kellstadt Professor of Marketing - Goizueta Business School of Emory and Founder of the ICA Institute, said that despite the US being a free economy and an independent state many years before India gained her independence, the US needs to look at itself in the mirror. Do we have a bi-partisan approach to things or are we living in the fear of a political shut-down all the time? Do we have a sound immigration policy or desire to have one? Do we have a clear view of what we wish to do with healthcare and our workers? Abeit easy to point fingers at a growing nation like India, just getting ready to flap its wings and take-off, a developed and leading nation like ours needs to take a deep look and understand how to have a win-win attitude. He spoke of turnarounds and how the most developed nation like ours will become the largest exporter of raw material like natural gas to a developing nation like India. Times have changed and there is more to come based on policies formed between our two nations. Trade between our two nations may be the biggest thing ever.

David Gault, GIACC’s past president, CEO of Direct Resource Group, and an expert in international logistics for supply chain, especially for India, since he visits India quite frequently, a gora saab as he calls himself; spoke on cultural do’s and don’ts. He cracked attendees up when he acted out the proverbial nodding of the Indian businessman – who means to say yes but nods suggesting a NO. He spoke in detail of things to do and what is appreciated, versus things to abstain from and prevent a diplomatic disaster.