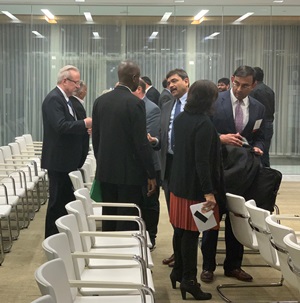 Network. Strive. Prosper. These words were emblazoned at the bottom of the GIACC banners in the offices of Greenberg Traurig, an LLP on the 25th floor of Terminus 200 in Buckhead, Atlanta, on December 4, 2018. The floor offers tremendous views. On this night in particular, the sunset cast a particularly pleasing aesthetic glow. Sharply dressed members of Indian-American and global trade communities filtered into the reception where a heavy buzz filled even the hallways surrounding the podium room.

Sonjui L. Kumar, founding partner at KPPB Law, and a former chairperson and current board member of GIACC, was moderator of the evening. After delivering opening remarks, she invited Dr. Swati Vijay Kulkarni to speak. Dr. Kulkarni holds M.B.B.S. (Bachelor of Medicine and Bachelor of Surgery) degrees from India and is a career diplomat, in India’s foreign service for over 20 years. She was here to discuss her new role as the third Indian Consul General of Atlanta, the first woman to hold the office.

“Today, in India, there is new enthusiasm… We want all our population to have a digital banking system so that financially our people are included. This has included 23 million bank accounts. In India today, 90 percent of the people—[even] in the most remote corner—are digitally connected through their banks,” Dr. Kulkarni proclaimed from the podium to the gathering of close to 75 people. The Consul General also spoke at length about the GST, or Goods and Services Tax, which has unified the tax market in India. She stated that India seeks $5 trillion dollar economy by 2025, to become the third largest globally. The USA is the second largest trading partner India has today, to the tune of $126 million done in business in 2017. She ended her speech by saying that Indian companies hold a presence in all 50 U.S. states, with tangible investments in all but one. A recent survey of 100 companies revealed that the U.S. has collectively invested $18 million in these businesses that include life sciences and pharmaceuticals. 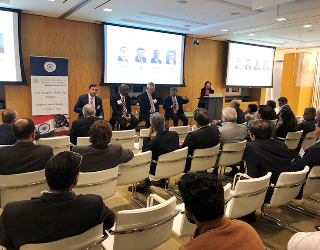 Speaking on labor, Trivedi said, “The importance of immigration for any economy is high… specifically the importance of immigrants here in the U.S. for the manufacturing. Secondly, there’s vocational training and greater skilling of U.S. workers. This audience is very familiar with the skilling in the Indian context, but we also have to make sure particularly if we want U.S. workers to be doing jobs in automated manufacturing, that requires vocational training and skilling.”

An attendee by the name of Vikaas had a question for Elliott Paige about Hartsfield’s direct flights or lack thereof to India. Paige said in an optimistic tone, “We used to have a flight that stopped in 2008. It makes sense. We’ve done the numbers.”

Dr. Sheth spoke on one of the strongest sectors of the U.S. in terms of global trade: agriculture. “No other country has come closer… India just equalized cotton in terms of exports.” The tenured Emory professor went on to draw comparisons between India and China. “China has decided they will never be selfish with their food. Food security to them is as important as military security. If you asked me 20 years ago if India would be the bread basket for China, I would say they were not ready. … The Chinese are diversifying Africa. China and India will make the difference in Africa’s rise.”

When asked how he got involved with GIACC, Gault said, “I was looking for groups of common people. I came to a GIACC meeting, where there was a fascinating meeting. It was like finding other brothers from a country I had attached my professional career to.”

Consul General Kulkarni (in sari) and GIACC members after the reception and panel discussion. (Photo: Courtesy of GIACC)