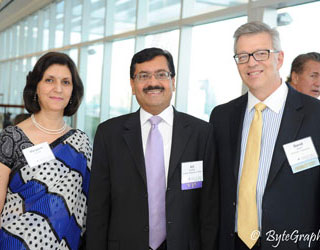 The Consul General of India in Atlanta, Ajit Kumar, stands with his wife Margret and David Gault, President-Elect of GIACC. (Photo: ByteGraph Creations)

It was a glorious summer evening, the air filled with laughter, chatter, good food and great cocktails. The Georgia Indo-American Chamber of Commerce (GIACC) hosted a cocktail reception on June 7th at the Nelson Mullins Atlanta office to welcome the city’s first Consul General of India, honorable Ajit Kumar, to the Atlanta business community. The event was attended by Atlanta’s business leaders, including those from Fedex, Kimberly Clark, Coca-Cola, L&T, Infosys, Wipro and Suave. The guest list also included members from several Consulates, chambers of commerce, educational institutions, and law firms.

It was an occasion to commemorate and celebrate the effort that many institutions, including the GIACC, put in to campaign for an Indian Consulate in Atlanta. The evening began with a networking session where the Consul General mingled with Atlanta’s thought leaders. Honorable Ajit Kumar’s gracious and affable personality has quickly become his trademark, making him a very approachable first Consul General for Atlanta. Ask him about the city, and he says, “I’ve always heard so much about Southern hospitality and now that I am experiencing it firsthand, it’s even better. The people here are warm and welcoming.”

After the networking session, Dr. Ash Thakker, President and CEO Global Technology Connection, Inc and former Chairman of the GIACC, gave a speech welcoming and introducing the Consul General to the audience. In his speech, Dr. Thakker also highlighted the importance of the occasion and the impact that the new Consulate would have on the Indian-American community. This was followed by the Consul General’s speech where he spoke about Indo-American business and political relations, and how it was the defining partnership of the 21st century. Ajit Kumar also saluted the Indian business community on their success in Georgia.

David Gault and Danielle Fernandes, former President, GIACC thanked the Consul General and presented a memento as a token of their esteem to the honorable Ajit Kumar and William Poole, Partner and head of Nelson Mullins’ Atlanta office International Practice. Bill Poole was one of the first lawyers in Atlanta to focus his practice on transnational business and investment. He recollected a Global Commerce Council of the Metro-Atlanta Chamber of Commerce event many years ago, with no more than 20 attendees, and observed that Atlanta’s international community had come a long way since then.

Among the other dignitaries present was Steven J. White, former Deputy Chief of Mission, U.S. Embassy New Delhi, and Dr. Jagdish Sheth, renowned scholar, marketing guru, and Charles H. Kellstadt Professor of Marketing at Goizueta Business School. White described the Indian community as vibrant, and said that having an Indian Consulate in Atlanta would help the trade relations between India and Georgia. Honorable Ajit Kumar concluded the evening by noting that the consulate would strive to serve the Indian American public and improve people-to-people relationships.