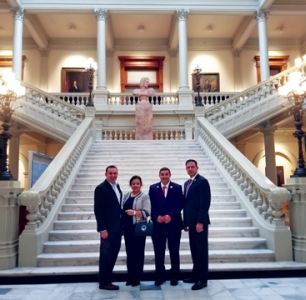 On Tuesday, February 4, 2020, Governor Brain Kemp met with journalists from local Indian media. The meeting, facilitated by Kartik Bhatt, who was recently appointed by Governor Kemp to the Board of Examiners for the Certification of Water and Wastewater Treatment Plant Operators and Laboratory Analysts, was attended by journalists representing Khabar magazine, NRI Pulse, TV Asia, Rashtra Darpan, India Tribune, Atlanta Dunia, and others. The event was also attended by Ritesh Desai and C.B. Yadav, who are both on the Governors “Georgians First” Commission, and Neera Bahl who was among the 25 Georgians appointed by Governor Kemp to the Judicial Nominating Commission. 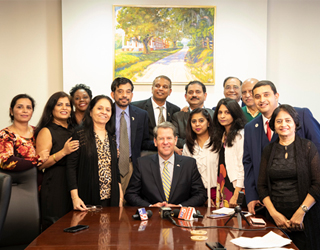 During the 30-minute meeting, the Governor spoke about some of his accomplishments so far—such as the reduction of the number of standardized tests in public schools, school safety grants, a pay raise of $2,000 to teachers, creating a task force to tackle street gangs, and more. He also answered questions from the journalists.

Some details from the Q&A session:
Q- Can you tell us how the voting system will work in the upcoming election?
A- The current voting system is aged out. New technology is in place for the upcoming election. There is a recent controversy, but the governor is confident that they are going to perform well. It is easy and fast to vote as one sees the paper ballot and then you scan after you see your selection. The recount is faster if need be and there is a paper ballot.

Q- How is the reliability since the QR codes can’t be read by humans and QR codes are what the scanners use to tally the votes. So how will the voters know whether QR codes reflect the candidate names next to them when they are scanned?
A- I will leave to The Secretary of State to answer this question.

Q- What are the incentives for the foreign investors who want to come to Georgia?
A- We look forward to talk with them. We are very open and it can go both ways. We would like to do business in India, too, like Cocoa Cola and UPS.

Q- When are you taking your team to India, and what the government doing for the backlog of visas?
A- I am very open. I will leave it to the economic department to handle that. I would love to go to India to meet Indian leaders and look at business opportunities both ways. 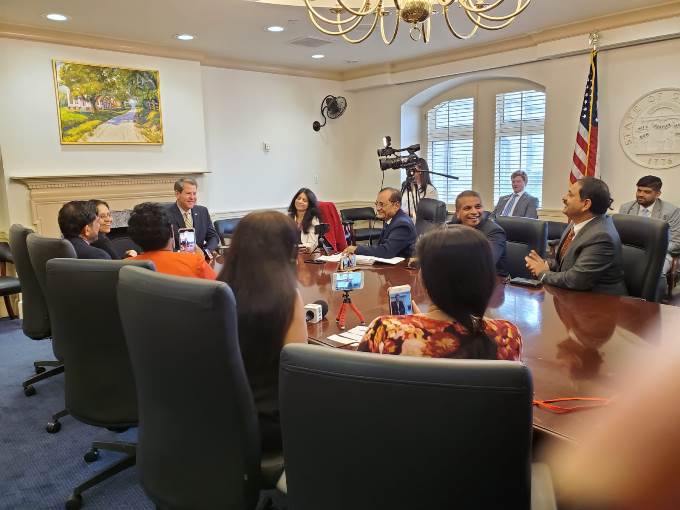