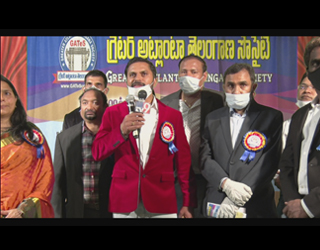 COVID-19 could not contain the fervor of GATeS Executive Council (EC), Board of Directors (BOD), and volunteers even as the day was celebrated virtually following CDC Guidelines. The program reached more than 10,000 people and was viewed by more than 5,000 people on GATeS Facebook Live Page and other media channels. 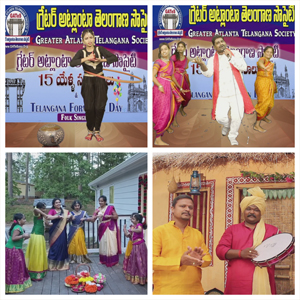 President Rahull Chikyala briefed year 2020 services which included serving food and grocery for 15,000 people for 22 days in Telangana districts, as well as in Atlanta during crisis of COVID-19. Chairman, Anitha Nellutla, thanked all the founders and the ladies who were instrumental in making Bathukamma a signature event of GATeS. Cultural Secretary, Srinivas Parsa, thanked speakers for participation in webinars on Awareness on Covid-19, Tax, Will, and Immigration. He thanked Sreedhar Nelavelli for coordinating Financial seminars, and Naveen Battini for organizing Yoga classes with Praveen Maripelly.

[​Top]Artists performed songs and dances for the event.​

The celebrations of the day ended with Sunil Gotoor (General Secretary) thanking Publicity lead, Ganesh Kasam for publicizing the event, and media coordinators Dr. Shivakumar Ramadugu from TV9 as well as Niranjan Podduturi from GNN for their help covering the event live on multiple media channels. GATeS Team thanked Prashanth Kollipara from Bytegraph Events for setting up and successfully managing this one-of-a-kind virtual event, as also the youngest GATeS volunteer Vainavi Battini for developing digital video frame for the event.