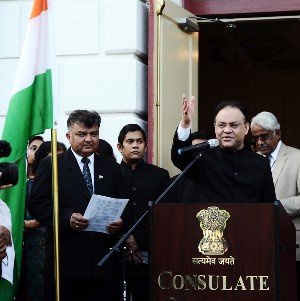 It is customary to expect the Indian Consulate in Atlanta to observe the anniversary of India’s Independence. However, it is refreshing to learn that the Gwinnett County Board of Commissioners, under the fine stewardship of Chairman Charlotte Nash, passed a resolution to commemorate August 15, 2017 as India Day in Gwinnett County. The honor is very humbling as it comes at a time when the conditions are very bipolar: a forward thinking county in the state of Georgia such as Gwinnett is home to a large congregation of South Asians and constantly celebrates its diversity, whereas the White House seems to be distancing itself with most things non-Caucasian, quite regularly these days. 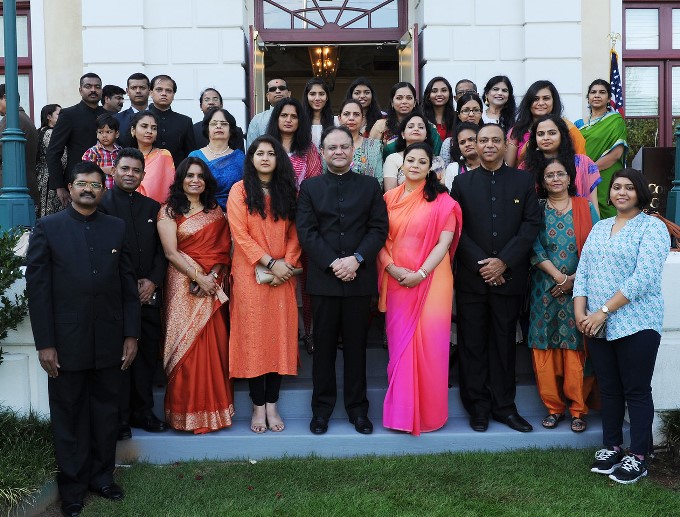 Consul General Nagesh Singh with his dedicated staff were set to meet all expectations in the pristine green lawns outside the main entrance of the Consulate. The podium, Indian and American flags, loud speakers, handouts of President Ram Nath Kovind’s speech, delicious refreshments, but most importantly, the Indian flag ready to be hoisted…all in place on time. Over 225 guests gathered with pride on a perfect Tuesday morning to participate in the ceremonial observance. 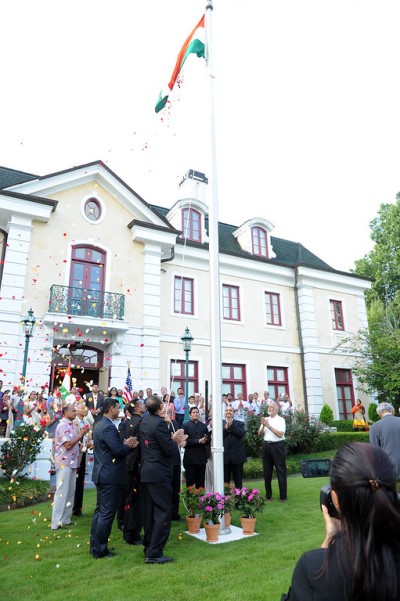 Hoisting of the Tiranga and rose petals floating down. (Photo: ByteGraph)

After a few minutes of meeting and exchanging Happy Independence Day greetings, Consul General Nagesh Singh warmly welcomed all and proceeded to unfurl the Tricolor. Red rose petals floated in the air from the flag before touching the awesome green turf, with everyone joyfully applauding, followed by enthusiasm to join-in singing India’s national anthem, “Jana Gana Mana.”

Nagesh Singh expressed how heartening it was to see an impressive turnout despite it being a workday. “It is my pleasure and privilege to read out Hon. Rashtrapati’s speech.” All listened intently as Nagesh Singh read India’s recently sworn in 14th President’s wide-ranging, powerful address to the nation, on the eve of India’s 71st Independence Day. The theme was ‘New India’ and the need for remaining united, committed, caring and compassionate, tolerant, living harmoniously and without discriminating on the basis of gender, religion, caste, or class.

“[W]e owe so much to the countless freedom fighters who made great sacrifices to bring us here…We need to invoke the same spirit today in the task of nation building.” He said, “our nation has been built by a partnership between citizen and government, between individual and society, between a family and the wider community.”

He struck an encouraging note saying “This spirit of empathy and of social service and volunteerism is very much alive in India. There are so many people and organizations that work quietly and diligently for the poor and the disadvantaged…They are nation builders in action, and we need to draw inspiration from them.”

He commended the people of India for accepting Goods and Services Tax (GST), and for patience and understanding in the days following demonetization. “Demonetization has boosted our efforts to build an honest society. We must sustain this spirit and this momentum.”

He said that to attain the goal of New India by 2022, “there are some obvious parameters—like a house for every family, power on demand, better roads and telecom, a modern railway network, rapid and sustained growth. And yet there is more. New India must include that integral humanist component that is in our DNA, and which has defined our country and our civilization.”

He touched upon the need to encourage sports in India, mentioning the Tokyo Olympics of 2020, and that government agencies, sports bodies, and business enterprises need to join hands to provide world-class training facilities for India’s athletes.

On caring and sharing, he implored, “Each of us must find a way to give back to society….Help teach a child other than your own. Just one!

The President concluded his speech with stirring words, “Gautam Buddha said, ap divo bhava …Be a lamp unto yourself…If we follow his teachings,…we can collectively be the 125 crore lamps that light up the path to a New India… Jai Hind.” 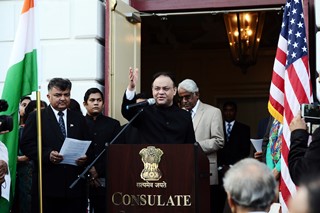 Nagesh Singh assured the gathering that India has come a long way since its independence. In the past 70 years, India has achieved a lot. We are the 5th largest economy with an 8% GDP growth. We have also progressed in social and economic reforms. 400 million people have been uplifted out of poverty and similar people from illiteracy, so we have much to celebrate today. These are monumental achievements in a democratic framework. Your joining us today shows your patriotism, love, commitment for the motherland, for which I deeply respect you. He continued, “Let’s all work together and not be critical of each other. Dialogue is the way forward. Come up with constructive ideas and solutions, so we can do better. Thank you all for your love and affection for our motherland and also for this country which you call home.”

On request by one attendee, Nagesh Singh also spoke briefly in Hindi expressing his greetings and thanking all for attending and listening to the inspirational speech. Sudhir Agarwal requested him to share with all gathered, about the India Day Proclamation by Gwinnett County later in the afternoon. Nagesh Singh read out the Proclamation and then requested all to enjoy the delicious refreshments. 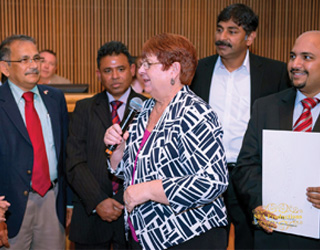 Indian Professionals Network Board Members Sudhir Agarwal, Rajan Vedak, and Ravi Ponangi had come up with the idea of initiating a formal request to Gwinnett County to call August 15, 2017 as India Day. They discussed this with Nagesh Singh, who was supportive. Chairman Charlotte Nash and Gwinnett County Community Outreach Director Nicole Love Hendrickson agreed to honor and celebrate the contributions of Indian-Americans in Gwinnett County. Soon the county sent a draft proclamation to which the IPN Board members provided input, and the final Proclamation was prepared.

A formal proclamation signed by Chairman Nash was presented in the morning to Consul General Singh, who promised to hang it up on the Consular Walls for high-visibility and appreciation, after he showed the same to all attendees at the gathering and read the text of the resolution passed. Copies of the proclamation were presented in the afternoon to representatives from various organizations that were present at the ceremonial celebration at Gwinnett County Commissioners Offices. 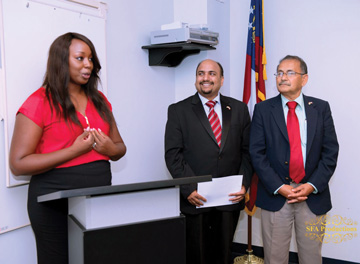 Community Outreach Director Nicole Love Hendrickson said, “The Office of Community Outreach is proud to cosponsor this event to recognize India’s 70 years of Independence! When we come together to honor and celebrate the heritage and contributions of our diverse communities, it unites us as a county. Many Voices, One Gwinnett! We thank the Indian community for its rich contributions to the Gwinnett Community and wish a heartfelt Happy Independence Day.”

Gwinnett County Board of Commissioners Chairman Hon. Charlotte Nash added, “As chairman of one of the most diverse counties in the Southeast, it’s fascinating to me that things I learned about from books when I was in school, I now get to hear about directly from people who have become our neighbors, colleagues, and friends. Today’s highlight of Indian Independence Day really brings history, civics, and geography to life for all of us. I appreciate the chance to proclaim August 15 as India Day in Gwinnett County and to highlight our Indian community and the contributions made by those who have chosen to call Gwinnett home.” 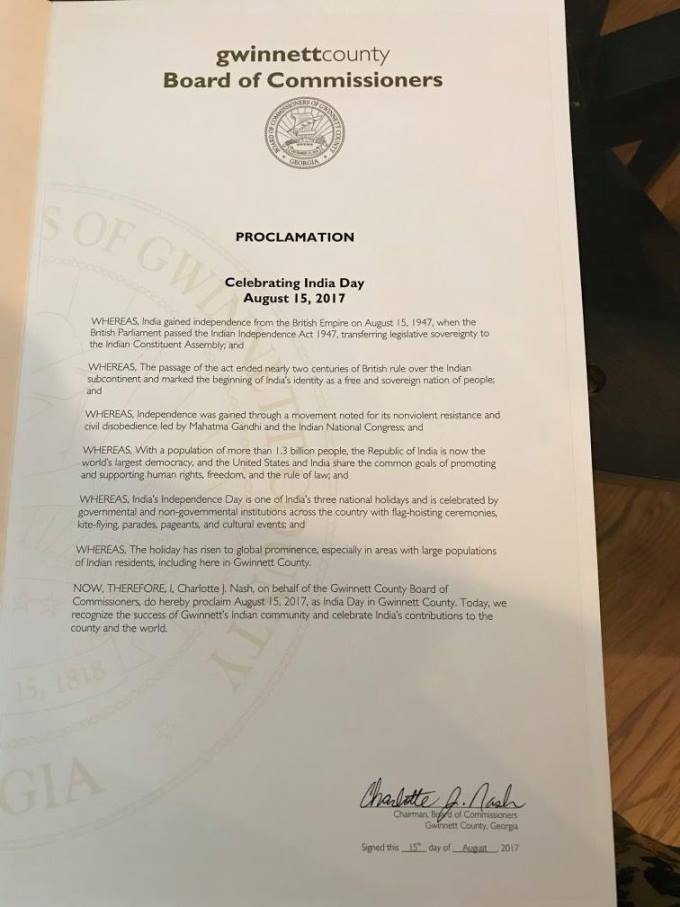 The proclamation made by the Gwinnett County Board of Commissioners under the leadership of Chairman Charlotte Nash, dated August 15, 2017, marking the date as India Day in Gwinnett County, Georgia.