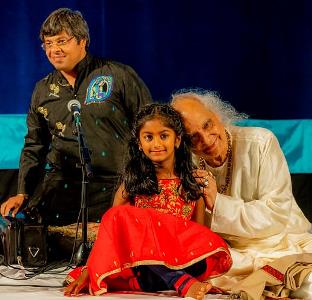 An annual health and wellness event was creatively launched by the Atlanta Chapter of the Heartfulness Institute (a nonprofit focused on Transformational Wellness through Meditation) and SwarGanga Music Foundation (a nonprofit that promotes North Indian Classical Music). This first event, “Heart Notes,” in the Grand Ballroom of the Infinite Energy Center’s Forum in Duluth, GA on June 30, 2018, sponsored by 27th Investments, featured celebrated author Chetan Bhagat, legendary singer Pandit Jasraj, and flute maestro Shashank Subramanyam for the book signing of The Heartfulness Way: Heart-Based Meditations for Spiritual Transformation by Kamlesh Patel (lovingly known as Daaji), the spiritual leader of Heartfulness, and co-authored by Joshua Pollock, a Western classical violinist and teacher of Heartfulness.

Attendees with special tickets received a gift bag with institute brochures, a pamphlet for the afternoon’s event, a Heartfulness mug, and a personally autographed Heartfulness Way book.

Inside, the stage was marvelously decorated, the edge completely filled with bulbous silk flowers and leaves. Two comfortable armchairs were center-stage, and the musician’s stage, edged in light blue was behind. Two large screens on either side of the stage displayed videos, images, and live feed for attendees in back to have a good view. Comfortable chairs filled the ballroom, with reserved seats covered in white with light blue sashes. The display of order and aesthetics was impressive.

Although more than a thousand were present, you could hear a pin drop. Noted health and wellness expert and host of The Dr. Nandi Show on TV, Dr. Partha Nandi from Detroit, Michigan, emceed the event. With a slide show, Dr. Nandi spoke of his childhood with a rare disorder that almost took his life. With intrinsic gusto and his family’s alternative beliefs, he not only survived but became a source of healing for others. He spoke about having a life purpose; the importance of eating, working, and playing together; and the importance of spirituality and humanity in life.

He described The Heartfulness Institute, its global presence, and the thousands of certified Heartfulness volunteer trainers, serving more than a million meditators in 130 countries.

The opening performance was by Grammy nominee Shashank Subramanyam, a child prodigy who began performing at the age of 6 and is now a renowned exponent of the bamboo flute and a global concert performer for the past three decades. He was accompanied by Tiruvarur Vaidyanathan, an expert on the Carnatic mridangam. The phenomenal recital with unbelievable speed of fingers on the flute resulted in a standing ovation. 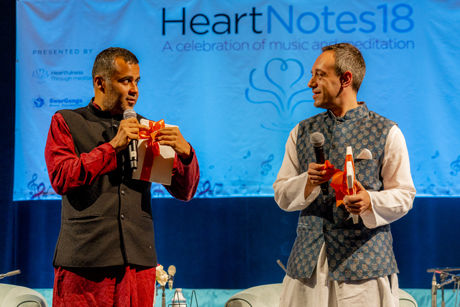 Next came the North American launch of The Heartfulness Way book, with the “fireside chat” between co-author Joshua Pollock (pictured at right) and author Chetan Bhagat (pictured at left).

Bhagat is also now a television personality for his rebellious attitude to stagnant practices, and a motivational speaker; see our report of his talk to Pratham Atlanta).

Joshua Pollock (whose interview is to be published in Khabar next month) teaches Western classical music in Chennai at a center launched by music maestro A. R. Rahman. Pollock collaborates with Rahman and performs internationally. He is also a Heartfulness practitioner and instructor and gives lectures and seminars. He holds a Bachelor of Musical Arts degree from Indiana University and two master’s degrees from Guildhall School of Music and Drama in London. He lives in India with his wife and their two children. 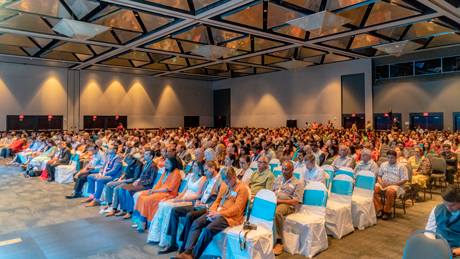 Bhagat, as an experienced writer, questioned Pollock about the book, his need to write it, and the meditative approach of Heartfulness. Pollock responded and then suggested that the audience would understand Heartfulness best by experiencing it. He requested that the lights be dimmed and that everyone shut their eyes and follow his lead into the meditation. Attendees participated for more than twenty minutes, led by Pollock. The entire discussion and experience were spellbinding.

With a very short break to reset the stage for Sangeet Martand Pt. Jasraj and accompanists, the audience hurried to grab a cup of tea and samosas before being enthralled by the world renowned doyen of Indian Classical Music. 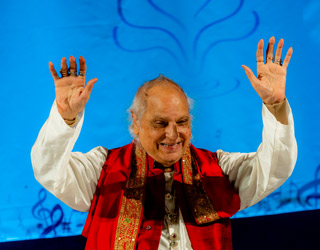 Pandit ji ascended the stage with his famous pair of hands ringing in the air, sending benevolent greetings to all attendees and inviting the Divine to bless his music. “Bade Guruji,” as he is fondly addressed, was accompanied by his disciples who have now risen to becoming noted classical music gurus themselves: Pritam Bhattacharjee (vocals); Pritam’s brother, Pt. Prithwiraj Bhattacharjee (tabla); Shashank Subramanyam (bamboo flute); and Pta. Tripti Mukherjee (harmonium and vocals). 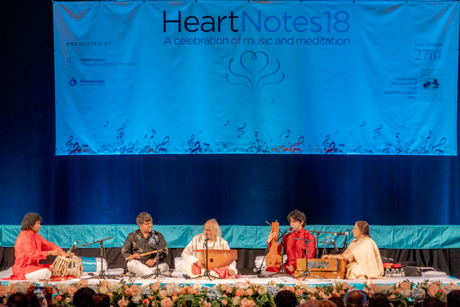 The opening rendition by the eighty-eight-year-old veteran singer, whose mellifluous voice delivered a chiseled Raaga Darbari, was a devotion to Lord Shiva: “Mano Buddhi - Chidananda Roopa Shivoham” in Addha Taal (16 beats) followed by “Har Har Har Bhootnath Pashupati” in Teen Taal (also 16 beats). With the audience eager for more, Pandit ji ended his recital with “Om Namo Bhagavate Vasudevaya” in Raaga Bhimpalasi with Bhajni Theka in Keherwa Taal (8 beats). The surreal evening came to an end as Pt. Jasraj ji thanked the audience for listening to his renditions patiently and thanked the Almighty for giving him courage and ability to perform. He wished everyone shubh ratri and safe travel and closed by saying that his music is his devotion to the Divine, and an offering which is shared by all listeners.