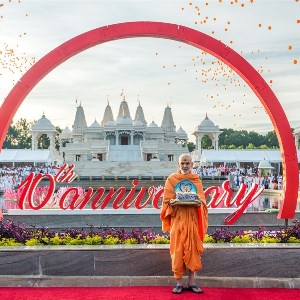 On September 21, 2017, His Holiness Mahant Swami Maharaj, the spiritual leader of the BAPS Swaminarayan Sanstha, left the United States after having spent nearly three months bringing peace, hope, inspiration and spirituality to thousands of individuals.  Devotees, well-wishers, and dignitaries from across North America came together in honor of His Holiness Mahant Swami Maharaj’s first trip to North America as the spiritual successor of the BAPS Swaminarayan Sanstha.

During the three-month visit, devotees had the opportunity to celebrate key milestones, including the 10-year anniversaries of traditional Hindu mandirs in Atlanta, Toronto and San Jose, as well as the inauguration of the Ghanshyam Maharaj Abhishek Mandapam and installation of the first pillars of Swaminarayan Akshardham (Robbinsville, NJ). His Holiness Mahant Swami Maharaj visited Atlanta, GA; Chicago, IL; Toronto, Canada; San Jose, CA; Los Angeles, CA; Houston, TX; Dallas, TX; Robbinsville, NJ and Edison, NJ. Across the country, the environment was filled with excitement, anticipation, and joy as the Hindu community welcomed His Holiness to the respective BAPS mandirs for the first time as the spiritual leader of the BAPS Swaminarayan Sanstha.

“The visits by public officials including 16 members of Congress to BAPS events help us emphasize the importance of civic participation for the Indian-American community,” explained Mukesh Swaroop, the Director of Government Relations for BAPS’ Office of Public Affairs.

On September 5, 2017, Mahant Swami Maharaj also met with former President Barack Obama.  During the meeting with former President Obama, Mahant Swami Maharaj highlighted BAPS’ work to encourage the Indian-American community to fully participate in civic life and how organizations like BAPS and the Obama Foundation can work to inspire young leaders to take up the call of public service through programs such as scholarships for students aspiring to careers in public service.

For Mahant Swami Maharaj, the theme of unity was his recurring and central theme.  He explained that each soul is divine and that inherent divinity should foster respect for all individuals, regardless of the differences that sometimes divide us.  He consistently prayed that public officials find strength and inspiration to unite their communities and the nation to work for the good of all.  On September 11, he joined community leaders and public officials to pray for peace, harmony, and unity in the United States and around the world.

Rep. Roskam explained in an evening service, “Your Holiness, I know that you’re telling the group ‘dãs no dãs, that is, we conduct ourselves as ‘servants of servants.’ And you've made me feel very welcome because I’m a follower of Jesus and because we have these themes [i.e. of service] that are unifying themes . . . .”  Echoing similar sentiments, Congressman Frank Pallone, said, “I really believe that...particularly what's preached by [Mahant] Swami about peace and unity is very much in tune with what I consider important American values."

"This is one of the highlights of my serving in public office, to have been with [Mahant] Swami earlier this evening, [and] to know about his message of humility, being dãs no dãs. (humble servant)”, said, Congressman, Joe Wilson.

David Fried, mayor of the Township of Robbinsville, NJ, said, “I am proud of what we've been talking about: unity and peace and (Mahant) Swami, I am proud to report to you that we have created here in Robbinsville, Samp (unity).”

“My friends, it is truly an honor and pleasure to join you in celebrating ten years of the BAPS Shri Swaminarayan Mandir in Toronto. The BAPS Mandir is more than an architectural masterpiece – It is truly a place for the community. Happy 10th anniversary!” said, the Right Honorable Justin Trudeau, Prime Minister of Canada in Toronto.

SOME HIGHLIGHTS OF THE TRIP:

The BAPS Swaminarayan Sanstha (BAPS) is a worldwide spiritual and humanitarian organization that is dedicated to community service, peace, and harmony. Motivated by Hindu principles, BAPS strives to care for the world by caring for societies, families, and individuals. Through various spiritual and humanitarian activities, BAPS endeavors to develop better citizens of tomorrow with high esteem for their roots and culture. Its 3,300 international centers support these character-building activities. Under the guidance and leadership of His Holiness Mahant Swami Maharaj, BAPS aspires to build a community that is free of addictions as well as morally, ethically and spiritually pure. For more details, please visit www.baps.org.

Pramukh Swami Maharaj was the fifth spiritual successor of Bhagwan Swaminarayan. Under his leadership, BAPS grew into an international spiritual and humanitarian organization with over 3,300 centers worldwide. He dedicated his life to the well-being of others, traveling throughout the world to foster love, peace, harmony, righteousness, faith in God, and service to humanity. With genuine care and compassion, he reached out to all members of society irrespective of class, color, or age. Recognized and respected as one of India's greatest spiritual teachers, he lived by and promoted the principle: “In the joy of others, lies our own.”