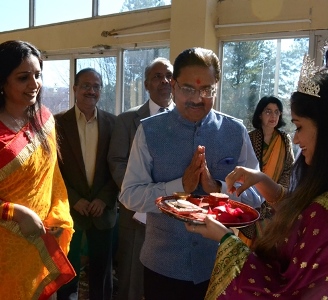 Celebration continued in the auditorium. IACA Vice President Rina Gupta and Darshan Kaur emceed. IACA President Vishwanath Ganti described the beginning of the drafting of the Constitution of India by founding father Shri Ambedkar. He also mentioned the history of IACA and its objectives of promoting and preserving the culture, values, and the great history of India by involving the communities and children in particular. 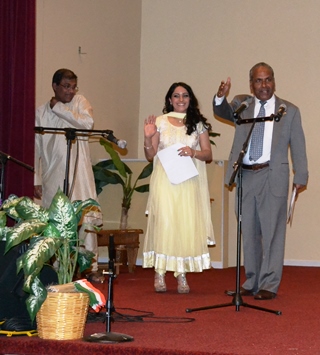 He then invited Sanatan Mandir’s priest Acharya Pramod Padhi and Imam Shadab to address the audience, spread a message of peace and harmonious living, and inculcate a lasting value system in everyone’s life. Acharya Padhiji spoke about Sanatan Dharma and requested all to respect each other’s faith, and learn to live and let live.

Shadabbhai narrated an interesting history of India’s freedom struggle. Speaking in Hindi/Urdu, he said that all Indians were involved in the struggle of independence that started back in 1799. The second wave started in 1857. Shaikh Abdul Aziz, a 1700s scholar, preached that Islam is against slavery and encouraged his followers to participate in efforts to seek India’s independence from British rule. The Shaikh preached that we as Indians share our happiness and sorrow, so we should also fight together to achieve our common goal of freedom from foreign rule. So our republic was established based on secularism that promotes peace and tranquility amongst all of us. This aspect of our constitution is a blessing for all of us and the key to our success. If we all respect it, than we all will benefit and it will lead us to sustainable success. 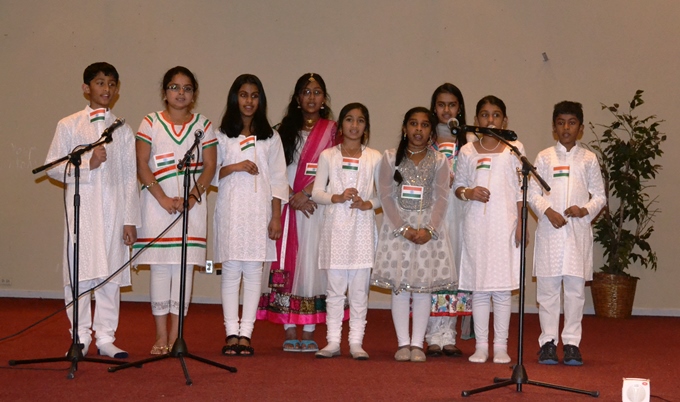 Shruthilaya’s Founder Kala Vasudevan’s well-trained young students entertained the audience with three patriotic songs: “Vande Mataram,” “Pyara Hindustan Hai,” and “Tan Man Dhan Se.” Bubbly emcees engaged the audience, especially the children, in an instructive and amusing Trivia quiz on India’s constitution, state with highest population, name of the first president of India, etc. Questions were interspersed between performances. Prizes were given by IACA Past President Nivedita Garabadu. The emcees’ cheerful rapport with the audience made this item an exciting and enjoyable one. 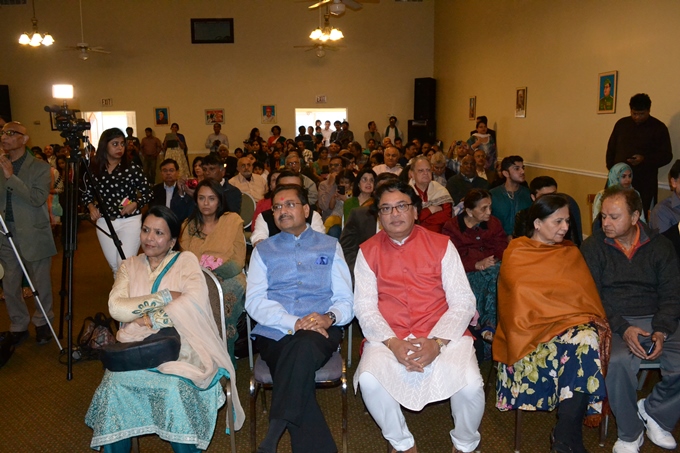 The cultural program and other Republic Day celebrations took place in the IACA auditorium, in use from c1984. (Photo: Mahadev Desai)

Consul General Ajit Kumar spoke on the history of the day and was happy to note that his father was a member of the Constituent Assembly and so contributed to the Constitution. He referred to India’s three main strengths: democracy, demographic dividend, and demand. On Indo-US strategic relations, he noted that on that very day, President Obama was meeting Prime Minister Modi in India, in a historic meeting with far-reaching topics of discussion. He invited the Indian-American community and Indian diaspora to contribute to the growth of India. And he commended Modi’s Swachh Bharat Abhiyaan so that India can be cleaner and healthier [see Website Bonus Features for details of his speech].

The audience was treated to a riveting video presentation on ‘Make In India,’ after which Ganti felicitated Ajit Kumar by presenting him a shawl. IACA Board member Kaushal Tripathi extolled Kumar’s genial nature and warm rapport with the Atlanta community, and said that he and his Consulate staff have been very helpful in rendering courteous and efficient services. 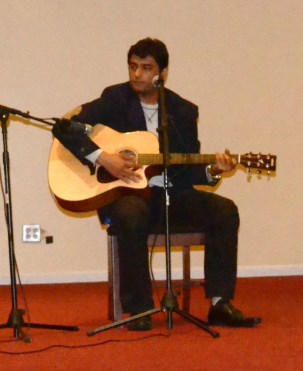 Shubhadeep Roy sang, with guitar accompaniment, a patriotic song composed by his father (his guru) and dedicated to all who are away from India but whose heart is still there. Roy also sang a poem “Amir Garib” composed by him, with message that whether rich or poor, all are human beings and should be treated alike.

Delicious refreshments and beverages were served to all at the end of the program. 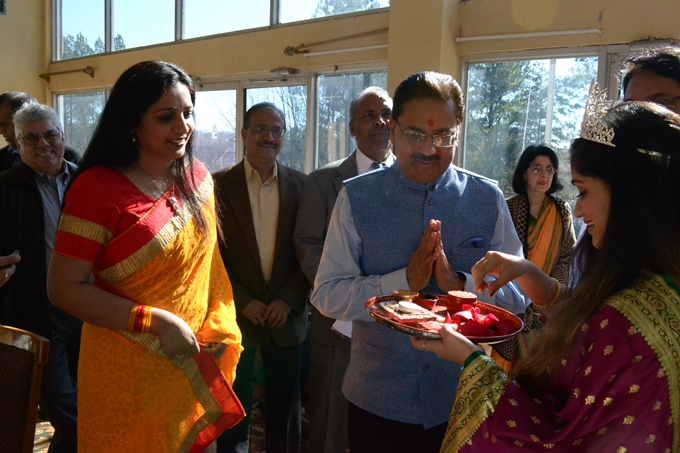 Consul General Ajit Kumar’s speech:
“I am very grateful for the invitation. India attained its independence on 15th August 1947. After three years, one of the finest Constitutions came into force on 26th January 1950. Hence the Republic Day is celebrated on 26th January each year ever since. I must confess that my father as member of the Constituent Assembly also contributed to the Constitution. (Applause)

“India is the world’s largest democracy. What have we achieved in 65 years after Independence? Today we have maintained and nurtured our democracy.” Ajit Kumar referred to the successful elections in India which brought in the new Government led by Prime Minister Modi.

“India is a unique country that has three main strengths: Democracy, demographic dividend, and demand.

“Democracy: India has evolved as the world’s largest democracy. It is very vibrant. There is no precedent in the world of a democracy of more than a billion people.

“Demand: India’s strong economic growth will ensure a strong demand for all kinds of goods and services.

“India is the third biggest economy in terms of purchasing power parity (PPP).IMF and the World Bank has predicted that that India’s GDP growth would overtake China in 2016 and 2017.” (Applause).

Ajit Kumar spoke briefly on Indo-US strategic relations. “As we speak today, the President of USA is in New Delhi. He is the first US President to be the Chief Guest at today’s Republic Day in New Delhi, where he witnessed the first majestic parade showcasing India’s military capability and rich cultural heritage. Just today President Obama and Prime Minister Modi had a meeting with far-reaching agreements in defense field, in energy field, and several other fields including economy, because economy is very important. India and the U.S. have already done trade in goods and services together of about $100 billion. The aim is to raise it fivefold to about 500 billion dollars. They have also touched upon global subjects like fight against terrorism, fight against climate change, and other important topics.

“I would also like to commend Modi’s Swachh Bharat Abhiyaan so that India can be cleaner and India can be more healthy.

“On behalf of the Consulate General of India in Atlanta I wish you a very happy Republic Day.”

Thanks:
Syam Yellamraju and IACA Past President Padma Rallapalli helped with the sound management.
In her Vote of Thanks, Nivedita thanked Hon. Ajit Kumar, IACA’s Founding fathers and past and present Officials, media, Girish Modi, inspiring speakers, all the dance, song, and music academies and their students; Chaitanya Bhatt, and food sponsor Haldirams for attending and making the celebrations a memorable event.