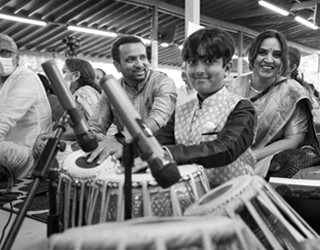 Despite the gloomy weather, a large congregation of devotees lined up early in the morning at the Hindu Temple of Atlanta in Riverdale on Saturday, July 9, where the spectacular Srivari Kalyanam (celestial wedding of Balaji) by the Tirumala Tirupati Devasthanam (TTD) was held.

[Left] Devotees at the Hindu Temple of Atlanta.​

TTD, in association with the Hindu temple of Atlanta, Riverdale, organized the spectacular Srinivasa Kalyanam. Archaka Swami Sridhar Acharya, who performs pujas at Tirumala Temple, conducted wedding rituals of Srivari Kalyanam as per Vaikhanasa Agama accompanied by live Nadaswaram. Srinivasa Kalyanam was celebrated on the lines of the Kalyanotsavam performed at Tirumala. It was a rare occasion for the devotees to witness the celestial wedding of the Lord and his consorts Bhudevi and Sridevi. 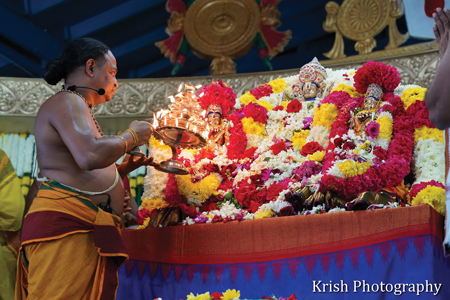 About 3000 devotees witnessed the wedding rituals on the specially decorated marriage platform. Another TTD Veda Pandit Sri Prahlada Acharya explained the significance of every step of the marriage ritual.

[Right] Celestial wedding of Balaji was performed at the temple.​

Prashanti Asireddy, HTA president, along with her team of executive members, trustees, and volunteers of the temple, meticulously planned and neatly executed the wedding events. 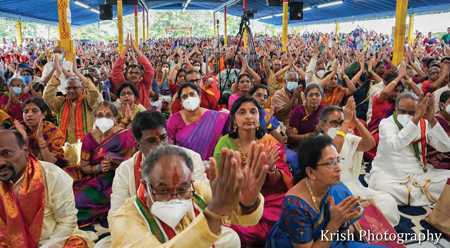 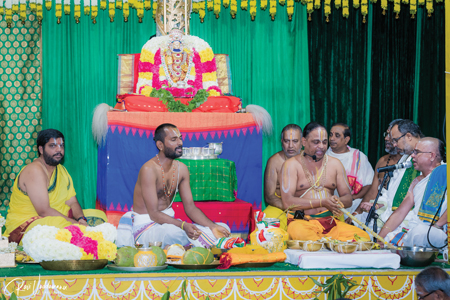 [Top] A crowd of 3000 devotees gathered to witness the wedding rituals of Balaji’s celestial wedding.