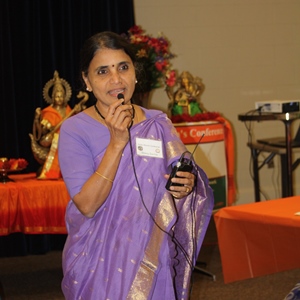 "When a group of teenage girls get together they compete with each other; when a group of women get together they empower each other!" If ever a quote managed to perfectly reflect the essence of a gathering of about a hundred women, this was it. The occasion: the Second Annual Hindu Women's Conference, organized by the Atlanta Chapter of World Hindu Council of America (VHPA), at the Pinckneyville Community Center in Norcross, Georgia, on September 13, 2014.

The theme of the daylong conference was "Empowerment through Knowledge," sharing knowledge from experts on spiritual, medical, and financial issues and, equally important, to give women a forum to voice their opinions on current issues, an arena where the audience were not only listeners, but also became spontaneous advisors on the complexities of life, their roles interchanging between mentors and mentees. Attendees came from all age groups and a variety of professions and backgrounds: young moms to grandmas, bringing with them their own unique perspective.

The conference began with the traditional lamp lighting by guest of honor and keynote speaker Pujya Didiji, Sushree Siddhehswari Devi of the Radha Madhav Society, and welcome addresses by Kusum Khurana, President of VHPA - Atlanta Chapter, and Manju Tiwari, coordinator of the conference. 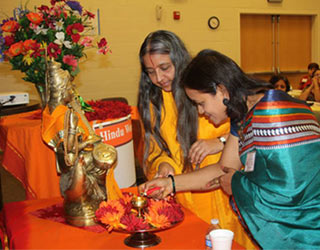 Pujya Didiji, a spiritual leader and an inspiring orator, spoke of the great women who shaped her life, highlighting the crucial role women play in the upbringing of a child. The Q&A session dealt with issues such as violence against women, gender inequality in society, and Hindu Dharma's stand on divorce, abortion, and reproductive rights of women, which is a raging debate, especially here in the US. Didiji answered questions with a calm serenity that is an integral part of her personality. Her messages, though, were clear: Women need to be more confident and self-reliant and have to take initiative to change the situation they are in—also that the Vedas and ancient Hindu scriptures were very progressive and actually empower women through their teachings to take the decision that is right and justified under the circumstances.

A presentation on the mission, vision, and various programs of VHPA followed. Congresswoman Tulsi Gabbard sent a recorded video message with her best wishes for the Conference, which was played for the audience.

A very important aspect of women’s empowerment, often overlooked by women themselves, is knowledge of finances and financial planning. Shri Puneet Seth, a knowledgeable financial adviser from New York Life, conducted an hour-long financial planning session with topics like taxation and retirement planning. An engaging speaker with the ability to give relevant information in an easy to understand format, he enjoyed undivided attention from the audience. The ladies had quite a few questions for him, which shows that women are getting involved in financial matters of the family.

The post lunch session took off with a 10 minute "Yog Nidra" led by Arti Sardaji, to refresh and energize the audience. Then Dr. Seshu Sarma, a leading gynecologist and obstetrician, delivered a most informative session on women's health, risk factors, recommended screenings, treatments, and therapies for various health issues. She also talked about depression among women and the urgent need for these women to get diagnosed and seek treatment. She especially emphasized the need for women to be proactive in taking care of their own health, which for the ever multitasking woman of today, gets pushed to the least priority. 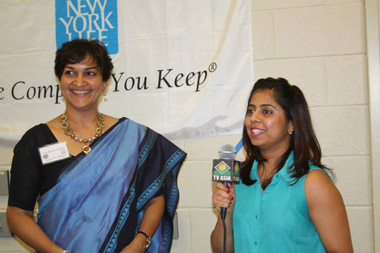 To keep attendees actively engaged, the organizers had put together a newsletter with articles on current events and issues related to women. These articles were the basis of interesting discussions that took place over tea and lunch. The "Penny for your thoughts" session asked the audience to react to two articles: one advising young women to find husbands while still in grad school and the other about women leaving Science, Technology, Engineering, and Math fields in spite of being highly qualified and capable. When asked what advice to give your daughters, answers ranged far and wide. One of the most welcomed answers was Dr. Shesu Sarma's "don't try to run your child's life", as was the advice to be supportive of your child's decisions and the consequences. A sobering advice was to teach girls to be able to "reasonably" adjust in order to have a successful marriage, in the wake of the alarmingly high number of divorces seen in Indian society these days. 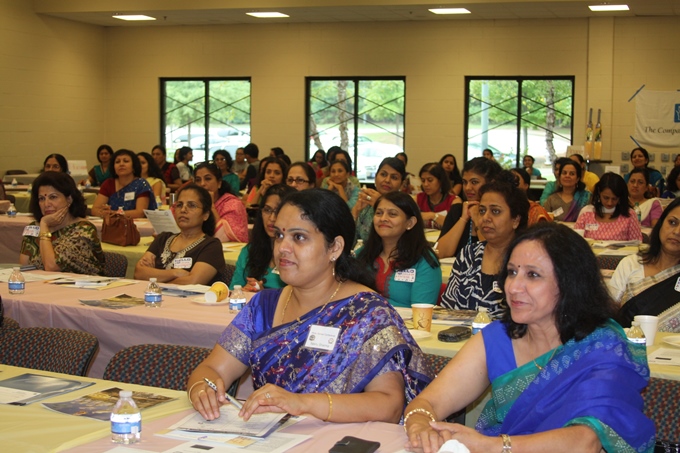 Discussion continued over lunch and moved on to the "Sweet & Tart" session about the body image issue among young girls. The focus was on raising healthy and confident children. The need for girls to break away from the stereotype of "cute" and "pretty" was stressed, but also the instinct, especially among young women, to look pretty and the need to celebrate femininity were rightfully acknowledged.

Not to leave our esteemed senior citizens behind, the "Chai Pe Charcha" was a debate on whether aging grandparents should be asked to take the role of (free) babysitters for their grandkids, in the case where both parents are working. Again, the audience responded with strong views on both sides of the issue.

The objective was NOT to provide a solution to all problems, but rather to start a healthy conversation where all aspects are given due consideration so that the final course of action is a win-win for all concerned parties. The audience proved to be a mature and balanced group of individuals, willing to embrace the Golden Mean path or the "madhyam pratipad" rather than to take extreme views. If the world were run by women, it would surely be a more peaceful and happy place.

The conference concluded with a vote of thanks by Manjula Reddy, Vice President of VHPA - Atlanta Chapter, especially for the financial support from New York Life, for student volunteers of the Beta Club of Peachtree Ridge High School, and a team of young volunteers from Balvihar: Richa Das, Divya Raghunathan, Yumin Shivdasani, Mugdha Daftardar, and Anushka Shivram.