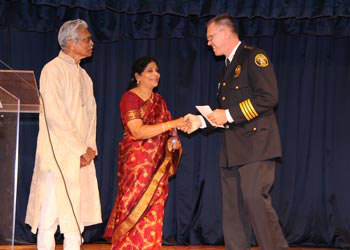 On Sunday, August 14, more than 300 guests, including officers of Riverdale city, Clayton County and members of organizations in Atlanta were present as the Hindu Temple of Atlanta honored the services of its volunteers and trustees. An invocation to Lord Ganesha by Kumari Akhila Echampati was followed by chanting of Vedic hymns by the temple priests led by Sri Gopal Bhattar. Dr. Jayasree Moparthy, president of the temple, reviewed the year’s activities, including consecration of the new yagasala, and invited guests to the upcoming 20th anniversary celebrations of the Balaji temple.

A donation of $2,500 to the Clayton County Police Officers Fund to aid families of officers killed in the line of duty was presented by Dr. S. I. Naidu, past president of the temple, to Deputy Chief of Police Robinson.

Dr. Ravi Sarma, Chairman of the Education Committee, honored Prof. Sundaresan and Prof. Venu Dasigi for their continued services to the Temple-sponsored Bal Vihar and SAT educational classes, respectively. Classes have been held on weekends at the temple for several years.

Dr. P. B. Rao, joint secretary, described the scholarship program that has come to fruition this year. Four Awards were given to graduating high school seniors, based on academic achievements, community service activities, and more importantly on financial need. Awardees received a Sanskrit citation emphasizing the value of education and a cash award of $1000 each. Awardees this year are Pitamber Adhikari, Likhita Duggirala, Sai Swaraj Maddali, and Adhithya Rajasekaran. Awards are renewable for the duration of their undergraduate years, subject to achievement and need, and recipients are encouraged to volunteer in the temple to learn and follow the tenets and teachings of Hindu dharma.

After Dr. Hyma Mikkilineni, immediate past president, thanked past presidents and volunteers, all enjoyed a program including Kuchipudi dance by disciples of Smt. Sasikala Penumarthi, classical music on violin by Ramesh Panchagnula with Anjaneya Sastry on tabla, and light vocal singing by Subra Viswanathan and Radhika Sundara Raghavan. Nostalgic memories were revived as Dr. B. K. Mohan walked the gathering through his excellent collection of photographs. As usual, Mr. Narender Reddy, vice president, was witty and effusive in his vote of thanks.

The decorated banquet hall, thanks to Dr. Tulasi Vanapalli, was the venue for dinner prepared by chef Ramakrishna and other kitchen staff and volunteers and organized by Mrs. Geeta Raghu, Dr. Sujatha Reddy, Dr. Tulasi Vanapalli, Smt. Parvathi Kancherla, Ms. Kamala Boggarapu and others. Dr. Jayasree Moparthy said that efforts will be made to make this an annual event.