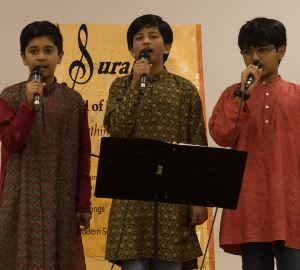 Surabhi School of Music was founded in 2012 by Director Debasri Dutta, who has been singing and performing for more than a decade and now shares a life-long gift of music with her students with the help of two other teachers, Prasuna Vempaty and Haimanti Mukhopadhyay. Surabhi’s spring recital was held on May 2, 2015 in Summerour Middle School in Norcross.

All students joined in the first item, a devotional song that set the mood of the recital. Group and solo performances followed in Hindustani, Carnatic, and Bollywood styles. Students tried ragas like Bilawal, Bageshree, and Yaman with confidence and conviction at their level. Performances on Bollywood songs were impressive. A Tagore song performed by a young student won the heart of audiences. Performances were short to keep the attention of the audience over the hour-and-a-half recital. Students did well, and the audience left the program in an elated mood.

The classical Carnatic devotional song performed by Prasuna Vempaty was tuneful and strong, and a semiclassical performance by Debasri Dutta was a distinctive bonus. Byasdeb Saha accompanied professionally on tabla. Students and teachers were awarded well-earned trophies.

[Photos will be added later today.]​​