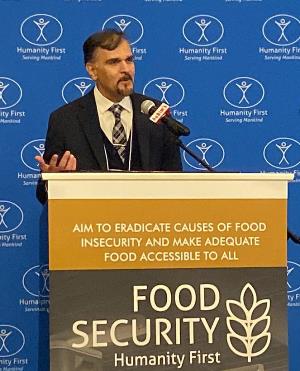 Humanity First – USA is a branch of Humanity First International, a global nonprofit organization registered in 50 countries and working to relieve the suffering caused by natural disaster and human conflict, to promote peace and understanding, and tostrengthen people's capacity to help themselves.

Bill Bolling, Executive Director of the Atlanta Food Bank, thanked more than 120 individual donors and officials. He further gave alarming facts about food scarcity in America and said that Feeding America's “Hunger in America” 2014 report is the largest, most comprehensive analysis of charitable food assistance in America, which shows that 1 in 7.5 people, or an estimated 755,400 people in metro Atlanta and north Georgia turn to food pantries and meal service programs to feed themselves and their families each year. This includes more than 164,000 children and more than 64,000 seniors."

The report also documents household demographics and offers a snapshot of the people served by the Food Bank—their circumstances, the hardships they face, and the choices they are forced to make living on extremely limited household incomes.

Dr. Kaleem Malik, who is currently the U.S. Course Director and Faculty for the Medical & Disaster Response Training courses conducted by Humanity First globally, explained the impact of Humanity First. He shared the projects of the organization by stating that Humanity First USA has responded to thousands of victims of disasters: hurricanes in the Houston metro area (Texas), Jacksonville and Naples (Florida), Guadeloupe and other islands (the Caribbean); earthquakes (Mexico); droughts in Timbuktu (Mali); Rohingya refugee crisis (Bangladesh); and back-to-back hurricanes (Puerto Rico). Besides Disaster Relief, other projects include Water for Life, Global Health, Knowledge for Life, Learn a Skill, and Food Security.

On September 1st and 2nd, Hurricane Dorian struck the Bahamas, the strongest hurricane ever recorded in the nation's history. For almost twenty-four hours the Bahamas were battered with category five winds, rain, and storm. At least forty-three deaths were reported and the damages estimated were close to $7 billion. Humanity First – USA and Humanity First – Canada, in collaboration with PAHO-WHO, have sent a joint EMT1 team of disaster first responders to the region. The team provided emergency medical care to affected communities.

Humanity First – Guyana has distributed 123 cooked meals to the homeless in Georgetown, Guyana. In the last several years, the Humanity First Gift of Sight program in Guatemala has performed more than six hundred free surgeries and restored the vision of people who couldn't afford the surgical procedures. In addition, several thousands of people have received free eye care and treatments that were not available or affordable by the majority of the population. Last year, Humanity First – USA's Gift of Sight team went to Guatemala for a week-long eye camp in which the team of doctors not only performed surgeries but also trained the local doctors and nurses on new surgical techniques and eye care.

Mr. Muzaffar Qureshi, Ambassador of Humanity First – Atlanta gave special note of thanks to all donors who donated for the cause and volunteers for organizing the annual dinner. Approximately $25,500 was raised during this event and will be used to relieve the suffering of mankind.