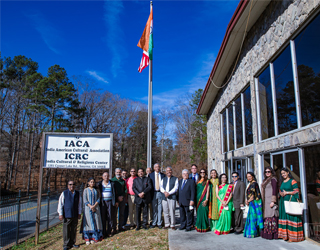 India American Cultural Association (IACA) kicked off its golden jubilee celebrations virtually on January 26, 2021. Initially planned for December, the event had to be moved due to the pandemic.

One of the first non-denominational organizations that started serving Indian-American community 50 years ago, IACA was founded on December 10, 1970 as a nonprofit organization, and was incorporated in the State of Georgia. At that time, there were only a few hundred people of Indian origin in Atlanta.

[​Left] IACA has a host of activities planned during its golden jubilee year of serving the community.​

The golden jubilee inaugural event, which was conducted virtually, was about one hundred minutes long and was divided in many segments: flag hoisting and national anthem, VIP messages, mosaic of past events, photo montage of programs as well as past IACA presidents and chairmen from 1970s-2020, video interviews of past presidents and IACA officials hosted by Ani Agnihotri and Vishawanath Ganti, and a cultural segment comprising of songs and dances by local talents. The complete event recording is available on YouTube.

Messages from Governor of Georgia, Brian P. Kemp; Consul General of India in Atlanta Dr. Swati V. Kulkarni; golden jubilee celebration honorary co-chairs, Dr. Jag Sheth and Harsha Agadi; IACA Board Chairman, Mr. Vir Nanda; and golden jubilee celebration co-chairs, Chand Akkineni and Ani Agnihotri mostly underscored the important role that IACA has been playing for the past five decades. Indian-American community in Georgia is now estimated to be over one hundred twenty thousand with the next generation of youth and children that the organization plans to cater to.

As IACA enters this milestone year, it will be hosting yearlong programs and activities. The celebrations committee plans to organize talks for Indian- American authors; celebrate International Women’s Day; and conduct a host of other programs such as IACA Talent Show, Rhythms of India, Antakshari, Health Fair, Festival of India, Atlanta Indian Idol and also a grand banquet. To facilitate such an undertaking, IACA Board had created an organizing committee as well as a host committee last year for these celebrations. Proceeds from the celebrations will be used for fixing association’s current building as also initiating plans towards an India Center.