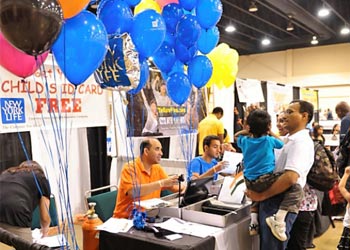 India American Cultural Association (IACA) organized its gala 15th annual Festival of India, to celebrate 65th Independence Day of India as well as the 40th anniversary of IACA, at the Gwinnett Center on Sunday, August 7, 2011. About three thousand community members thronged to the venue to celebrate with patriotic spirit and pride.

The Festival was kicked off with a ceremonial lighting of the ‘flame of Independence’ at IACA on July 10, 2011, with IACA President Sneha Mehta; Program Director, Festival of India 2011, Padma Rallapalli; and Chief Guest Greg Pridgeon, Chief of Staff to Rockdale County Board of Commissioners, in attendance. The torch was then lit in Johns Creek and at the Global Mall. At all venues, ceremonies were well attended by prominent city officials, Indian community dignitaries and enthusiastic supporters.

IACA President Sneha Mehta welcomed all, saying that IACA is the only organization that caters to all the people of Indian origin. IACA was started with a vision to preserve the Indian culture in America, and help those newly migrated to feel at home. “Whether you are born in America or in India, you have found a home in IACA.” She thanked past presidents and reviewed events: India’s Republic Day, Spelling Bee workshops, annual Scholarship banquet, musical evening, a Gujarati comedy hosted with Sanatan Mandir, Holi with color and dance dhamaka—and more planned.


Sanatan Mandir President Bharat Kotecha noted that the present temple is the second oldest temple in Georgia, serving since 1986. The construction of the new Temple is in final stages now with donations welcomed.

Dr. Josephine Tan (Community Development Region Manager at Georgia Power and former Chair for Asian American Commission for a New Georgia), spoke of values and economics: “It has been a pleasure to convey my greetings for the past fifteen years. According to the 2010 Census, there are about 105,000 members of your community in Georgia. I am very proud of your vibrant community, which has strong family values and entrepreneurial spirit. You… have contributed greatly to make Georgia a better state for all… If you have any interesting project for economic development, please let Georgia Power know either through IACA or Georgia Indo-American Chamber of Commerce.”


Samir Doshi (Exec.V.P, IACA) introduced Ivan Figueroa (Council Member, City of Johns Creek), saying, “He is actively involved with services for seniors and YMCA” and a strong believer in parental support of public education. Figueroa said, “The Asian community is actually our largest minority population, something we embrace completely. We want to do more and more especially embracing your culture.”

Kaushal Tripathi (IACA Board of Directors) recognized past Presidents of IACA, and Sneha Mehta and Syam Yellamraju presented them with commemorative gifts.

Dr. Tan and IACA’s Executive Team for 2011were also honored.


Despite the economic downturn, all 60 booths were filled by vendors of Indian apparel, jewelry, toys, real estate, education, insurance, travel, and medical equipment for disabled and seniors. Booths were set up by nonprofits, and the sponsors’ booths—AT&T, Kimberly-Clark, and Georgia Power—were busy. GOPIO-Atlanta also had a booth with its President Bhairavi and her husband Nadgonde. Atlanta’s popular Sarvana Bhavan, Royal Indian Cuisine and Royal Mazedar Kulfi by Unique Foods International did a brisk business.


The children were kept engaged by Pallavi Rallapalli and Leena Joshi. The kids made Indian themed bead bracelets and had fun with henna designs. Leena Joshi of ‘Theme Works’ Creative Arts Classes for Kids and Adults also conducted an Arts Competition.

The Festival of India, which began in 1997, provided everyone, especially Atlanta’s fast growing young Indian generation, with a heart-lifting slice of the invaluable culture and heritage of India.