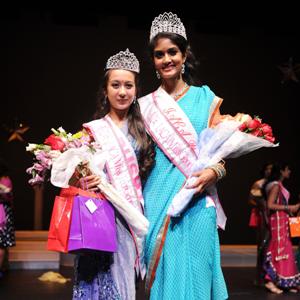 On Saturday July 13th IACA held its 28th beauty pageant in the Robert Ferst Center for the Arts on the Georgia Tech campus. It was a sold out event, and many had to watch standing up at the back and on the two flanks of the auditorium.

“Angels on earth,” on a star and moon studded stage, were thirteen teenaged girls who participated in IACA Miss Teen Georgia pageant and fifteen young ladies who took part in the IACA Miss Georgia pageant. All 28 contestants performed the opening dance, choreographed by Shiva Turlapati of Shiv’s Institute of Dance. Archith Seshadri and Movina Nagarajan emceed for the teens, and Sumeet Goraya and Anjali Tripathi for the ladies. 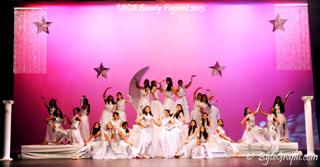 Gurpreet Sarin, the jazz and soul singer who made history on American Idol as “The Turbanator,” sang Ray Charles melodies, including “Georgia on My Mind.” (Photo: Bytegraph)

Special entertainment was provided by Gurpreet Sarin, the jazz and soul singer who made history on American Idol as “The Turbanator,” here singing Ray Charles melodies, including “Georgia on My Mind.” Hema Shilpa, a Kuchipudi dancer, performed to a medley of Bollywood songs. After intermission, Sniti Mishra charmed the audience with classical rendering of a dance number and the movie song “In ankhon ki masti.”

Contestants showed their style on stage in beautiful saris and dresses, with makeup and jewelry making them as gorgeous as brides. The audience learned how to participate in voting by SMS texting on their cellphones for the People’s Choice Award, and how scores would be tabulated; results were announced at the end of the pageant. 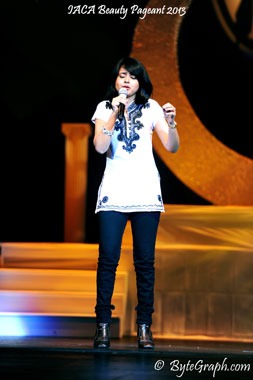 A talent round for all contestants had been held at the IACA facility in Smyrna on July 9th, and the video of this performance was shown to the audience and judges. The top 3 ladies then danced on stage: Veena Anilkumar— who performed a classical dance called Mohini Attam, Nancy Jhanji, and Geetika Jape. Similarly, the top 3 teens were Bhoomi Laliwala (piano), Aneesha Dasari (singing), and Pushtee Jhaveri (dancing), who all performed amid much support from the audience.

The evening gown walk was followed by question-answer for each of the 28 contestants. Ten finalists took a second round of questions, with each finalist given the choice of a judge to ask the question. Finalists were Nancy Jhanji, Anusha Gopali, Neha Sinha, Geetika Jape, and Veena Anilkumar, and teens Arsheen Kour, Pushtee Jhaveri, Gargee Sathe, Sushma Neelagaru, and Neha Gulrajani.

Students of Shiv’s Institute of Dance (below) danced in Bollywood style, and emcee Sumeet Goraya had time to ask a few questions of his own to contestants. 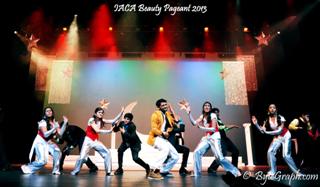 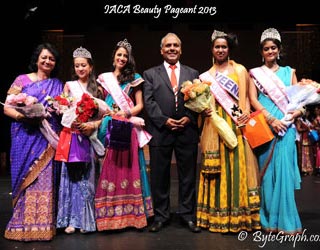 Dr. Paddy Sharma, IACA chairperson, along with Dr. Lakshmi Rao, gave each contestant a trophy and bag of goodies.

Mr. Kaushal Tripathi, president of IACA, and Rina Gupta, director of the pageant, applauded the community, contestants, and all participants, especially the parents for trusting IACA with their most precious possession, their daughters—”Angels on earth.” Mr. Tripathi assured all of IACA’s commitment to stay worthy of the trust and work to make the pageant even stronger. He spoke of the contestants’ hard work during the last two months on poise, self-confidence, and friendship. He noted that Virag Tripathi, music coordinator and DJ of the evening, had initiated the connection to StandUp2Cancer and that the pageant raised funds for the organization, in line with IACA’s objective of giving back to the community.