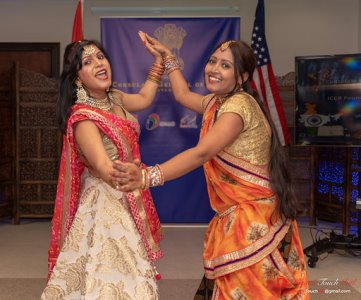 The Indian Council for Cultural Relations (ICCR), an autonomous organization of the Government of India, was founded by the late visionary and Indian freedom fighter Hon. Maulana Abul Kalam Azad, the first Education Minister of independent India, on April 9, 1950. ICCR’s mission is to energize India’s external cultural relations through cultural exchanges with other countries. Steeped in diplomacy, it acts as an ambassador for brand India.

The Consulate of India in Atlanta has added April 9 as a day of observance and celebration for the ICCR Founding Day and plans to stage a festive program annually on this date. There isn’t a better way to befriend India than through its secular cultural celebrations. The Indian Consulate has been programming a host of events and developing a strong calendar to engage the Southeastern U.S. mainstream from the eight regions under the Mission’s charter. Another such event is scheduled for the International Day of Yoga on Sunday, June 23, 2019 from 7:30-10:30am at the Heritage Sandy Springs Park. 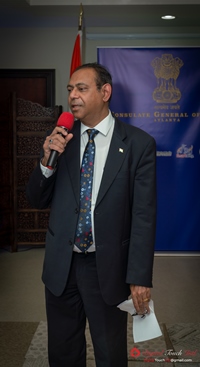 The first Atlanta ICCR evening began with Consul Asim Kumar (Head of Chancery, etc.) welcoming all to the very well-choreographed program. Mr. Bikash Kumar (PS to Consul General Kulkarni) introduced Consul Shailesh Lakhtakia (Community Affairs, etc.), who gave an introduction about the ICCR, Maulana Azad’s contribution to the ICCR and India, and glimpses of cultures from other places in the world provided to the people of India. Building camaraderie among nations is a people’s business, he said, and the easiest way is through a culture connect. He also shared the anticipated departure of Bikash Kumar as his term in Atlanta was up and that he would be dearly missed by the staff and guests of the Consulate, who have appreciated his humor and service friendliness.

Despite it being a weekday evening, every seat in the hall was occupied and people were taking the liberty to gather chairs from elsewhere and line them up in the front to sit, encroaching on the performance area. Besides showing a short film from ICCR, a slide show on ICCR ran throughout the event. A short video was also presented on the forthcoming International Day of Yoga with remarks on Indian culture by yoga expert Dr. Somveer Arya, a current Atlanta resident lent to us by the ICCR. He briefly explained the rigor and value of Indian culture (sanskriti) and how yoga was embedded in daily life. 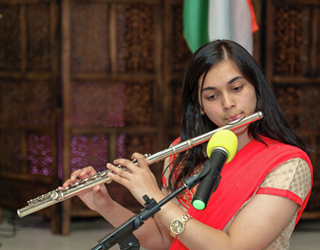 The evening’s program then flowed with the young: Shruti, Vedarsh, and Sanskriti Mishra, and Havishkrit Arya melodiously sang Vedic hymns. They also explained the alternating rhythmic count of chanting shlokas. Mishra sisters, Shruti on flute and Sanskriti on keyboard, separately played a song on the instruments. It was a delight to see the devotion with which these multitalented ladies performed. 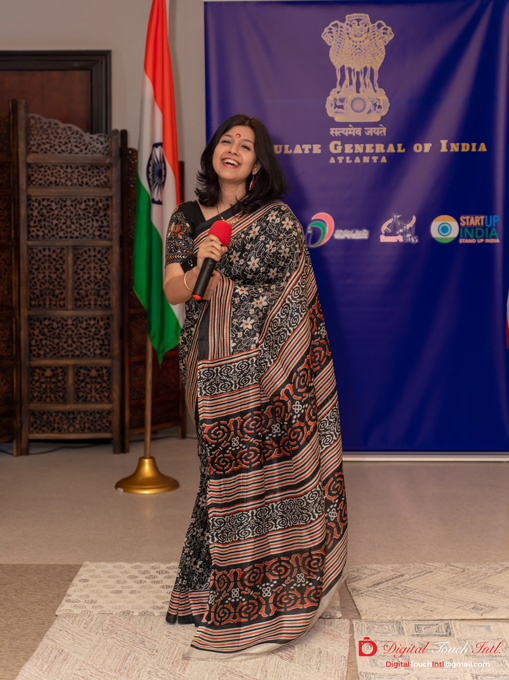 One cannot have an Indian international event without the presence of Gandhi ji woven in it—so his favorite hymns “Raghupati Raghava” and “Vaishnava Jana to” were performed by Pranav Swaroop (violin) and Arvind Narayan (mridangam), both Georgia Tech students. 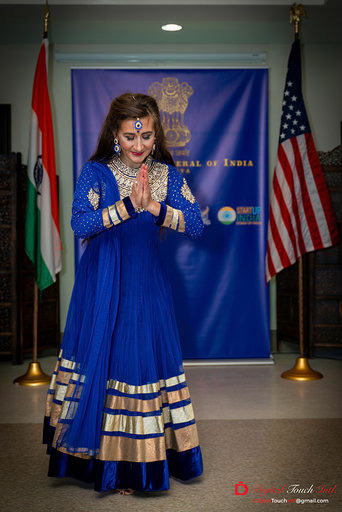 A Bengali number was performed by Ms. Rimi followed by a complete surprise of the evening. Ms. Maria Martynova had lived in India, fallen in love with its sanskriti, and learnt Kathak; she performed a dance in Kathak attire, complete with hairdo, tikka, and topi, to the thunderous applause by all guests. She danced to a devotional Bollywood number “Radha Nachegi.” With total humility, Maria accepted the appreciation and spoke briefly of India’s impressions on her.

One cannot successfully depict India without garba and Bharatnatyam, so those elements were also included. The raas-garba dance was based on a fusion of original Gujarati folk songs remixed for Bollywood, presented by Hetal Mehta and Aarti Lunawat. The Bharatnatyam performance was presented by Raji Venkat and Neelu Kokimalla, and included items such as alarippu and thillana.

An innovative fashion show “The Maharanis of India” was presented by choreographer Swati Thakur, with Pooja Mallik as Maharani Lakshmibai, Priya Shrivastav as Raani Padmavati, Bhrushira as Jodhabai, Sukhleen Kaur Khera as Mastaani, Mamta Akshay as Rani Gayatridevi, and Karishma Katara as Razia Sultan. Original Hindi poetic recitations were presented by Bikash Kumar and Sandhya Bhagat. While Bikash’s recitation was based on humor, Ms. Bhagat’s poetry was of the conflicted sentiments of being Indian overseas.

The show stealer was Sukhwinder Kaur’s presentation of Sufi songs. She began by introducing Sufi music as the music that directly connects you to the divine. She sang a nazm by Baba Bulleh Shah in Punjabi Kalam followed by the extremely popular “Dum-aa-dum mast kalandar.” Once she had everyone clapping in tempo, she closed her act with the famous Bollywood number from the movie Purab aur Paschim: “Hai preet jahan ki reet sada.” This ended the program on a crescendo!

Consul Lakhtakia invited all for a delicious spread catered by Narendra Patel of Madras Mantra and Madras Chettinaad restaurants. Everyone thoroughly enjoyed the program and the delightful dinner, before calling it a great weeknight.