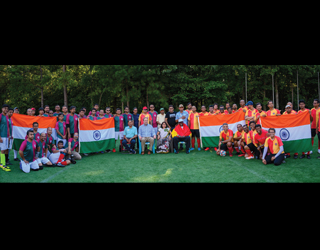 The IFA Shield USA Kolkata Derby kicked off at 5 PM sharp. A first of its kind, it was a simulated football/ soccer match between two legendary Kolkata teams, Mohun Bagan and East Bengal—the titans of the Indian football world.

The chief guest, Dr Swati Kulkarni, Consul General of India in Atlanta, encouraged everyone to remember their roots and fly the tricolor on August 15 in remembrance of that historic occasion. Soon, everyone rose in respectful silence to the beautiful strains of the American and Indian national anthems sung amazingly by Atlanta’s very own pair of gifted young “nightingales,” Kuheli Mitra and Anushka Chowdhury.

Cheerleaders sported red and orange pompoms, the East Bengal colors. Supporters of the two rival teams were packed to capacity on the covered bleachers. They exchanged witty verbal barbs as the initial playoffs kicked off between the junior teams. In line with the tradition, a pair of “Ilish” or Hilsa fish decked in East Bengal colors was also on display as a good omen for that team.

Surprisingly, despite a boatload of cheers and jeers, the first half ended in a stalemate. Speculation charged the conversation bringing it to a fever pitch as the second half too drew to a close. Was it going to be a dull goalless tie? But no! All of a sudden, the air was shattered as the long-awaited magic word “Gooaaaal” exploded over the speakers. East Bengal had scored the first goal of the day! Their team and supporters were jubilant. Mohun Bagan kept trying tenaciously for an equalizer. But either the pair of “Ilish” or the capricious fate seemed to have decreed otherwise. Unbelievably, East Bengal scored again! Their fans and cheerleaders went ballistic with red and orange pompoms dancing around. The prelims had them leading 2-0! Reputed former East Bengal player Mike Okura’s face was beaming, lit up like a thousand-watt light. He had flown down with his family all the way from Houston, Texas.

The deciding event, however, was the final between the qualifying teams from each side. But here too, the game ended after some breathtaking edgeof- the-seat, nail-biting moments, with a call for a tiebreaker. Each side now had five chances to shoot the ball into an open goal.

East Bengal effortlessly sank in two goals in two attempts and missed a couple. Mohun Bagan lobbed the ball off course twice and squandered the third shot. They then pinned their hopes on an absolute newbie. And lo and behold he achieved Mission Impossible with a goal! The score now stood at EB: 2 vs MB: 1! The entire crowd was as tense as a taut wire. Both teams were left with just a shot apiece! Everyone was literally on the razor’s edge. Mohun Bagan went first and fired off a half volley. But it sped past the goal, as if by some weird quirk of fate, leaving East Bengal breathing again! If they scored now, they were home free! Their man took the shot. All necks swiveled to follow its path. But it was nowhere to be seen in the air! It turned out to be what in cricketing parlance would be called a perfect cover drive or the equivalent of a birdie in golf! The ball hugged the green Astroturf and rolled ever so gently but inexorably with the East Bengal fans willing it on. Finally, the field erupted in a roar as the commentator Arko bellowed “Goaaalll!”

East Bengal won the coveted IFA SHIELD USA 2022 in Atlanta. Excited chatter buzzed throughout the award ceremony and photo shoot which followed. The ladies in the catering team, meanwhile, had warmed up dinner in perfect time for guests, their entourages, the spectators, and the hungry throng of players. The appetizer menu featured finger-lickin’- good empanadas, samosas, and pastries. And the dinner to remember consisted of veggie chop, chicken “ghughni,” naan, and chicken curry conjured by the local “Iron Chef” Avro.

The wrap-up was finally completed around 10:30 pm after a historic, fun-filled day to remember. It had set the ball rolling for more such festive events to come. And what better way to promote our international relations and propagate our culture than through sports, art, culture, food, fun, and sheer mutual goodwill?