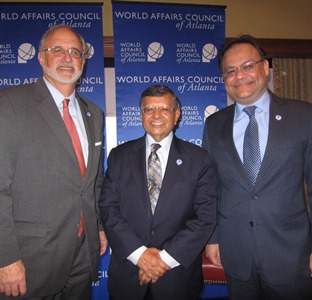 The World Affairs Council hosted a luncheon with Dr. Jagdish Sheth and the Indian delegation at the City Club in Buckhead on February 9, 2016, with theme “Imagine India in Ten Years.” Jagdish Sheth, Ph.D., is Kellstadt Professor of Marketing, Goizueta Business School, Emory University and Director of Wipro Ltd. A renowned scholar and internationally recognized thought leader, he has published more than 300 research papers and more than 30 books on various disciplines and topics. He is frequently quoted and interviewed by Fortune, Financial Times, The Economic Times, The New York Times, and The Wall Street Journal, and is a regular guest and frequent commenter for major news networks: BBC, CNBC India, and CNN.

When people imagine India, the images which come to mind are chaotic traffic, aromatic spices, and a mystical land for spiritual retreats—but Dr. Sheth painted a different picture: a bustling economy with the rise of the digital age and the new mindset of its modernized young people. In fact, the International Monetary Fund (IMF) has retained India’s growth forecast for the next two years in the World Economic Outlook: it expects the Indian economy to grow 7.5% in FY17 and FY18, the fastest among major economies, and has pegged the current year’s growth at 7.3%, the same as last year.

Dr. Sheth outlined three “unique outcomes, not forecasted by the government” that will help India achieve the expected growth rate. 1) India will be a global hub for the services economy; professional services will be outsourced, and the services industry will create a manufacturing industry. 2) The biggest transformation will be digital India, or e-commerce. India has twenty million smart phones for this year alone, and the number is expected to increase to 200 million by the end of this year. This is expected to transform an unorganized economy. 3) There is also the rise of India’s middle class young people. The mindsets of the young ones are very different to the traditional mindset of their families. They bring in new ideas and reform, increasing individualistic consumption. 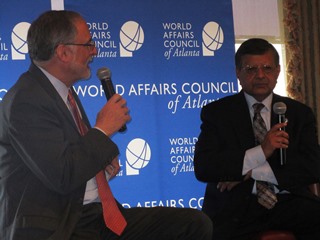 The burning question is will India overtake China? Perhaps, in ten years or so, but as much as the world would like to make them geo-political rivals, India and China will be more cooperative. The Chinese economy will become less export oriented and will outsource manufacturing, possibly from India.

Is the growth coming from low energy prices as opposed to transformation? Low energy prices have helped in terms of balance of payments, but have not helped the power sector; rather, they have helped the petro-chemical industry. Reliance Industries Limited (RIL), headquartered in Mumbai, for example, has record prices. It owns businesses across India in energy, petrochemicals, textiles, natural resources, retail, and telecommunications. It is the second most profitable company in India, and the second-largest publicly traded company in India by market capitalization. Another key industry is pharmaceuticals—India is becoming the capital for manufacturing generic drugs.

India has half a billion people living below the poverty line. There are two types of emerging income earners. One is the young graduate, working for a software company, who has a lot of expenses, lives in an expensive apartment in Bangalore, and does not have enough disposable income. The other is the laborer without education earning 60,000 rupees per month; although he supports a family, he does not have high expenses—his expense is more aspirational, to make sure his children are well educated.

Gold is still a strong commodity in India, as it is elsewhere in the world. There are 50,000 metric tons of gold in India. Hard cash daily earnings are kept in gold. There are 2.5 trillion dollars in savings in gold, but it’s not a liquid asset.

The world has been keeping a close eye on Prime Minister Narendra Modi’s successes and failures. Modi has put world leaders from Russia, Germany, China, and the U.S. at ease. Outside of India his legacy is strong. India is a strategic partner in the trilateral relations with China, India, and the U.S. The world wants to do business with India for geopolitical reasons as well as the ease with which business can be done. However, within India, frustrations are growing. People were promised many changes, but they’re not happening fast enough for a worn-out society. There is pent-up frustration from the previous government. The system itself is a multiparty pluralistic system, so reform is very slow. The private sector is not able to buy Modi’s favors—making him unpopular. The country’s current biggest asset is the foreign affairs ministry, making it a very strategic trade partner. But the two bureaus pulling the country down are the Income Tax Bureau and the Central Bureau of Intelligence. They are bureaucratic, but computerization will slow down corruption and stop their abuse of power.

A Q&A session followed. Also participating in conversation with Dr. Sheth were Ambassador Charles Shapiro, President of the World Affairs Council of Atlanta; and Consul General of India in Atlanta, Nagesh Singh. 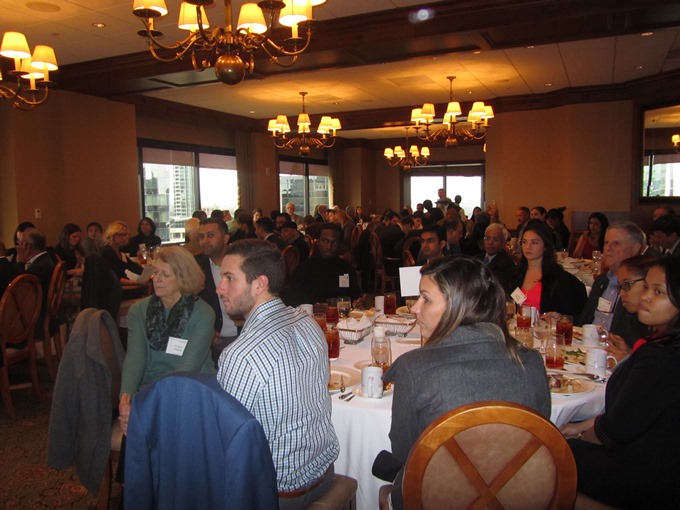