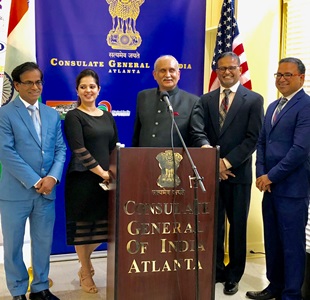 The current deadly drug/opioid epidemic contributes to over 50,000 American deaths per year. Just last year, the number of deaths was more than that of the whole Vietnam War.

After warmly welcoming all, Dr. Sreeni Gangasani, emcee of the program (and Chair of the 2019 AAPI Convention, AAPI BOT and Director, Past President-GAPI, and Director of GAPI’s Volunteer Clinic), explained that AAPI and GAPI are trying to increase awareness of this epidemic through educational sessions and programs, and greatly appreciated support from Consulate staff and community leaders in conveying this message.

Uplifting renditions of both the U.S. and Indian national anthems were given by Atlanta’s classically trained vocalist Dr. Arati Pandya, eliciting wide applause.

Nagesh Singh thanked Dr. Gangasani for giving the Consulate an opportunity to partner in this exemplary endeavor to increase awareness about the drug/opioid epidemic. He was astounded at the magnitude of the problem, he said. “It is a national emergency. We should engage with the mainstream in tackling this problem. Though I would be moving from Atlanta in a fortnight, I will still reach out to you…. Back home also it is a huge problem. We can work together on preventive measures. I commend GAPI/AAPI in its noble initiative in Georgia.”

AAPI President-Elect Dr. Naresh Parikh said that AAPI/GAPI have been working closely with Dr. Sanjay Gupta of New Jersey on this Opioid Awareness Program. Last year 8,000 deaths were in the Pan-Asian group, mostly younger generation, so the community needs to mobilize.

Dr. Asha Parikh, Chair, BOT, GAPI thanked Consul General Nagesh Singh for hosting the event at the Consulate. She said she would like to work with healthcare workers and community leaders to help schools, colleges, and community centers, to educate them about chronic opioid use, prevent new cases, and facilitate treatments of addicts and drug victims.

Bhavana Anand of Anand Entertainment informed the gathering that the upcoming Shaan concert in Atlanta on July 14 will support Opioid Epidemic Awareness.

Dr. Sanjay Gupta from New Jersey is a pain management specialist, Founder/Director of American Pain Association, and Producer of Health Time TV. He trained in Interventional Pain Management through his Fellowship from Harvard University. The award-winning doctor travels extensively to speak on medical topics. Here he made a power point presentation and cited statistics on the opioid crisis. In 2010, he said, no one talked about this, but in 2015 it became a hot topic. The problem has actually been going on for the past twelve years. In 2010 there were 30,000 deaths, about 100 a day, but issues like breastfeeding, skin cancer, walking for fitness, obesity, etc., were more in the news. Part of the problem is that we are a media prone society. Though only two people died of Ebola in the U.S., the media was talking about it 24/7. In 2015, Senators and lawmakers were requested to make this issue public. Dr. Gupta started an online campaign and within a week had overwhelming response from 12,000 families. The problem had been kept silent here just as in India. Families hide it. There is a lack of rehabilitation facilities. Dr. Gupta shared a story of his three patients who died because of overdose of prescription drugs from the same unscrupulous doctor. In the U.S., the amount of money spent is not the problem: in 2013, eight billion dollars were spent on this problem; in 2014, it was ten billion. Resources have increased but so has the number of deaths. So the problem is not being tackled in the right way. Powerful pharmaceutical companies, lobbyists, and the 1% of doctors who are corrupt (and difficult to catch) are responsible for this. Doctors can be investigated only if someone files a complaint. New and more potent drugs are being used. Dr. Gupta also touched upon the legalization of marijuana. In Georgia, it is still not legal except for medical purposes, and then it is very expensive.

What initiatives are being taken?
• Dr. Gupta explained that about six months ago, travel began to different States, to meet lawmakers and get the public involved.
• Kids are influenced by pop culture, so they need to be educated about drug use. Engaging students in schools, colleges, and universities is very important. “Champions of Change” Clubs in each school will coordinate with other such clubs. Resources will be provided for local projects.
• A Drug Awareness Resource Book will be distributed nationwide. Ideas, drawings, and articles are being sought for this.
• Singer Shaan’s North American Ten City Awareness Tour includes Atlanta (July 14).
• Dr. Gupta urged the gathering to spread the word and help tackle the mounting epidemic.

Dr. Raghu Lolabhattu gave a brief history of GAPI and also requested all to work together to implement the initiatives outlined above.

Lynnette Allen, Opioid Coordinator of Fulton County, noted that there are 22 drug drop boxes placed within Fulton County. Anonymous Text—a phone tip-line pilot program—has been set up in 5 high schools, so that kids can talk about drugs, bullying, etc. Fulton County Government is the first County in Georgia to file suit against pharmaceutical companies manufacturing opioids for their role in the crisis. She implored all to get involved.

LaTrina Foster, Director of the Fulton County Department of Behavioral Health and Developmental Disabilities said, “We need more than one entity to solve this epidemic, so we welcome this collaboration with you all. We have recently appointed Lynnette as Opioid coordinator. Fulton County will use the money from litigating against prescribing drug companies for more recovery services, for more awareness programs, for educational programs. More counties in Georgia have joined behind Fulton County in this.”

Dr.Gangasani thanked Nagesh Singh for going the extra mile in providing efficient and quick consulate services and in organizing many events for the Indian community in Georgia.

The complexity of the epidemic was illustrated in Dr. Asha Parekh’s closing remarks as she shared her concerns for some patients who need pain medication but are unable to get it because of restrictions and so turn to street drugs, while other patients get addicted to pain medications and reach out to street drugs. AAPI Secretary Sudhakar Jonnalagadda, in his vote of thanks said that families, schools, workplaces, medical institutions, and healthcare providers all need to work together.

The American Association of Physicians of Indian Origin (AAPI) is a 100,000-physician-strong group, second to the AMA. It has taken an active role in creating awareness of opioid addiction which resulted in death of 55,000 last year alone. Opioids like hydrocodone and oxycodone when taken with Xanax and alcohol can cause respiratory arrest and untimely death in the younger generation. Awareness can be spread in the community, temple and gurudwara, school and high school, gatherings of all kind. Testing with a $3 urine cup can identify potential users who can be treated with appropriate referral to addiction specialists. Last year 8,000 deaths were in panAsian group, mostly younger generation. Parents are advised to watch for subtle signs in their children such as losing grades in school, lack of judgement, apathy, erratic behavior, loneliness and aloofness, depression. Opioid usage can be either from prescriptions or from street drugs and black market.