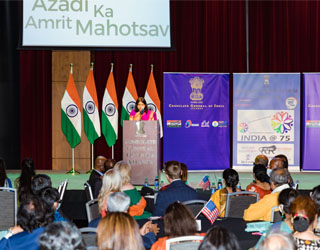 The Sandy Springs Performing Arts Center was brimming with guests decked up in their glitziest best to attend one of the finest annual events hosted by the Indian Consulate for the southeastern USA located in Atlanta. The occasion was the Indian Independence Day observance and celebrations. Almost like clockwork, the guests started to arrive beginning at six pm, the slated hour, and spent over an hour socializing with others. Due to the pandemic, many guests were meeting each other after a year’s hiatus.

During this networking session, the video screens on either side of the stage ran a video clip of the Honorable S. Jaishankar, Minister of External Affairs, India, as he spoke of the significance of the 75th Indian Independence Day. Soon after,Asim Kumar,the Head of Chancellery at the Consulate, brought the house to order, requesting everyone to take their seats and settle down. He introduced the Honorable Consul General Dr. Swati Kulkarni and requested her to approach the podium and bring her remarks.

Consul General Dr. Kulkarni, known to be enormously innovative in the Consulate’s workflow management, shared highlights from India’s President, Shri Ramnath Kovind’s speech,“Azadi ka Amrit Mahotsav”delivered to the nation on this occasion. He said, “Our nation, like many others, suffered great injustices and tyranny under foreign rule.What distinguishes India, however, is that the character of our nationalist movement, led by Mahatma Gandhi, was based on the principles of truth and non-violence. He and all other national heroes provided us with an invaluable blueprint to not only liberate the nation from colonial rule, but also to rebuild it. Gandhiji’s struggle was for a return to Indian ethos and for human dignity. Now as we look back to the seventy-five-year journey of our republic, we have reasons to be proud of the considerable distance we have traveled. Gandhiji taught us that slow and steady steps in the right direction are preferable to rapid strides in the wrong direction. The world looks up at the miracle of India, home to the plurality of traditions and yet the biggest and most vibrant democracy.” His complete speech can be heard here: https://www.youtube.com/watch?v=zRjMWpNa5dI

Dr. Kulkarni described the many achievements that the Consulate was able to secure despite the pandemic setback. She also shared the initiatives taken specifically for the victims of the pandemic. She spoke of her innovative chatbox initiative where virtual help is provided to hundreds of FAQ seekers online without having to wait to get an appointment or filing one of the many forms. This initiative, smartly titled “Kahinbhi, Kabhi bhi” (Anywhere, Anytime), is also used by the diaspora not serviced by this Consulate, yet her team has fielded questions from them and promptly responded to queries. Apart from such a one-of-a-kind initiative, she also spoke of the continuous reach into the mainstream U.S. elected officials at all levels to promote India’s agenda and strengthen the bilateral relationships between the two nations. She shared a short video clip of the several meetings she has had with officials from all over the southeastern U.S. to include Mayors, House of Representatives, Governors, and such. She also recognized the special guests invited: Rich McCormick, Politician; Sheikh Rehman, State Senator (D-Georgia); David Shafer, State Senator (R-Georgia); Matt Reeves, State Senator (R-Georgia); Angelika Kausche, State Representative, (D-Georgia, 50th District); Kim Schofield, State Representative, (D-Georgia, 60 District); Sharon Cooper, State Representative, (D-Georgia, 43rd District); John Ernst, Mayor, Brookhaven, who attended with his spouse; Bianca Motley Broom, Mayor, College Park; Felicia Moore, Candidate for Mayor, Atlanta; Christopher Smith, Honorary Consul General of Denmark; Ambassador Dr. Amina Smaila, Consul General of Nigeria; Alex Gandler, Deputy Consul General of Israel; Marva Jacobs, Honorary Consul, Guyana; Clance Ellis, Honorary Consul General of Uganda; Pooja Batra, Bollywood Film Actor; and PrajeshGuneeswaren, highest-ranked Indian singles Tennis player.

She concluded her remarks recognizing the Consular team that works tirelessly to meet and exceed her targets as well as thanked the Indian organizations that are always willing to support her endeavors. She invited Pooja Batra, who was also the Grand Marshall for the Festival of India organized by IACA, to say a few words. Batra applauded the effort invested by the Indian diaspora to keep the Indian culture and tradition alive in the U.S. by such observance and celebrations hosted with pride. She said she was grateful for being invited and had enjoyed every moment spent with the city’s diaspora. She thanked the guests for the affection shown to her and retired to her seat.

Asim Kumar then introduced a sequence of dance presentations, with the first one performed by Atlanta’s reputed Deeksha School of Performing Arts with Manasa Prasad, Sanjana Menon, MahekSaha, Uma Mukhopadhyay, Angela Frances, Susmita Dhar, Ashwika Anil Nair andSohini Gupta. They performed a Bharatanatyam classical item based on a devotional song. The next performance was presented by Atlanta’s premier Kathak dance academy, Nritya Natya Kala Bharati. The dancers wereIshika Mehta, Kiran Vardhrajan, Tara Vardhrajanand Shirin Kuppuswamywho performed on Shree Krishna’s love tale. The third performance was by another Bharatanatyam dance school, BharatkalaNatya Academy. The performers includedAbhignya Sai Panatula, Ramya Ramaswamy, SharnitaSudhaher, ShrinidhiVangala, Shreya Srinivasan, Shreya Sunil, Tara Velappanand Vyshali Menon. The Deeksha School of Performing Arts presented the fourth and final entertainment which was a fusion dance by the same group of performers. The dance recital was based on fusion music and the crescendo was the combination of the various religions in India based on the theme of “Unity of Mother India,” followed by India’s national song, “VandeMataram.”

The guests applauded and cheered the dancers who had done an exceptional job of delivering rich entertainment for the gathering. Once this portion of the event concluded, all were invited to enjoy the delicious culinary spread setup in the lobby of the Arts Center. Long lines did not dim the tasty efficacy of the south Indian menu items. Whilst many queued to serve up the savory food, others opted to stay inside for photo-op with Dr. Kulkarni. The event was completely packed, superbly organized, and a treat,especially after a long hiatus during the pandemic that had prevented everyone from gathering collectively at large events.