COVID-19  In-depth info for Indians in Atlanta/Georgia. Click here
Home > Magazine > Around Town > Indian-Tibetan couple present two films at Emory University: When Hari Got Married and The Sun Behind the Clouds

Indian-Tibetan couple present two films at Emory University: When Hari Got Married and The Sun Behind the Clouds 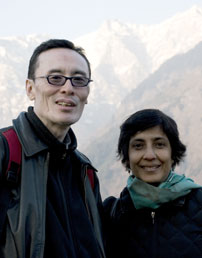 Ritu Sarin is an Indian married to a Tibetan, Tenzing Sonam. Such a marriage is unusual, perhaps because most Tibetans in India are more focused on returning someday to a free Tibet rather than on assimilation and making their permanent home in India. Also unusual is the fact that both are filmmakers. They were at Emory University in March, speaking to students, presenting their films, and answering questions. 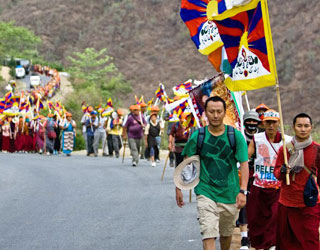 The Sun Behind the Clouds: Tibet's Struggle for Freedom (2009) is an award-winning documentary chronicling the uprisings in 2008 in Tibet and the nonviolent actions of supporters around the world at that time. Included is the nonviolent march, made by Tibetans from India towards Tibet, that was stopped by the Indian government. Audience members questioned why India intervened, and the filmmakers responded that because marchers might have been met by bloodshed on their arrival in Tibet, India did not want an international incident. The Dalai Lama also did not want embarrassment for India, since India had given asylum to Tibetans. The film also discussed the several different approaches to resolving the Tibetan issue: return to an independent Tibet vs. the “Middle Way” of remaining in China but having autonomy and keeping their culture. Numerous questions followed the film, and the filmmakers explained the worsening, and dire, situation. It is noteworthy that Gandhi has again inspired a march, this February from Dharamsala to Delhi, with marchers thanking India for its hospitality and highlighting the life-and-death situation. 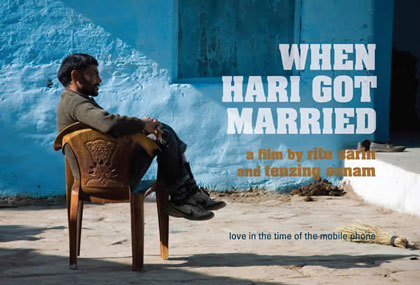 When Hari Got Married (“love in the time of the mobile phone”) was made after The Sun Behind the Cloud and was a welcome respite. Serendipitously, the gregarious Hindu taxi driver of the documentary lived near Ritu and Tenzing. His courtship and marriage to a local Himalayan girl in the Dalai Lama’s exile capital of Dharamsala, India, is delightfully presented, full of honest, heartwarming, and humorous discussions of life, from social issues to politics to death. About death, for example, he seriously explains, “You never know when you’ll lose the mobile signal.” The Q&A included revelations about social structures, problems of men who have left the fields but don’t find enough work, possibilities for village women who want education and may now be seen driving a scooter to a job. The filmmakers described the film’s reception in Mumbai, where one reviewer was so far removed from village life as to see … “The Simpletons.” The Emory audience, however, seemed uniformly interested and appreciative.

When Hari Got Married | Trailer | ITVS