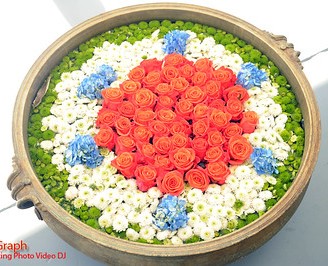 (Left) One of the urlis in the colors of the Tiranga, at the Consulate's Republic Day celebrations. (Photo: ByteGraph)

Honorable Nagesh Singh, Consul General of the Republic of India for the Southeastern USA, Mrs. Pragya Singh, and consular staff hosted the observance of India’s 68th Republic Day on Thursday morning, January 26, 2017, at the Atlanta Indian Consulate, followed by an evening reception. 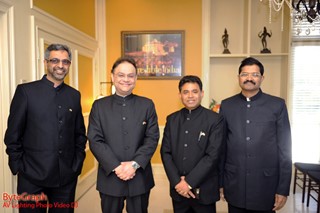 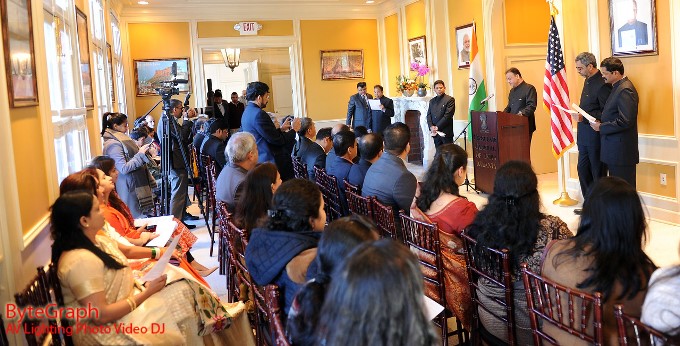 Nagesh Singh welcomed all and said he was heartened to see an impressive turnout despite it being a working weekday morning. Considering the cold weather outside, he read the Hon. President of India Pranab Mukherjee’s rousing and inspiring address to the nation on eve of Republic Day, inside the consulate.

Continuing progress by India since Independence in economy, infrastructure, education, and healthcare were noted, as were the benefits of flagship initiatives like Swachh Bharat mission, programmes like MGNREGA, Aadhaar, Digital India, Start-up India, Atal Innovation Mission, and Skill India Initiative. Covered was why the Indian economy was performing well despite the challenging global economic conditions; growing at a steady pace of 7.2% in the first half of 2016-2017 budget year. The speech addressed the most recent and temporary slowdown of the economy in December 2016 due to demonetization, which was a strong attempt to immobilize ‘black money.’ “As more and more transactions become cashless and electronic, it will lead to a greater economic transparency.” The President cited the enormous talent in the founding fathers of our democracy who laid out the Indian Constitution due to which in the last six and a half decades Indian democracy has been an oasis of stability in a region troubled by constant unrest. Despite significant increase in population, the per capita income has seen a tenfold increase. These are staggering data points that cannot be overlooked, albeit the nation strives to increase contribution to the socially deprived and correct the huge regional imbalances. The speech also recognized the bravery of the soldiers who have made supreme sacrifices of their lives in defending India’s territorial integrity and maintaining law and order. Philosophically, he shared, “India’s social, cultural, linguistic, and religious diversity are our greatest strength. Our tradition has always celebrated the 'argumentative’ Indian, not the 'intolerant' Indian. Multiple views, thoughts, and philosophies have competed with each other peacefully for centuries in our country. More than the unison of ideas, a healthy democracy calls for conformity to the values of tolerance, patience, and respect for others.” Finally he exhorted all Indians "to work harder because our motherland asks each of us in whatever role we play to do our duty; with integrity, commitment, and unflinching loyalty." The entire speech is found at http://republicday.nic.in

Nagesh Singh then appealed to the community to feel free to call the Consulate and reach the right individual to solve their problems rather than use social media to vent their grievances in an abusive manner. He assured the community that the Consulate is diligently trying to improve services and simplify procedures. Delays are often caused by documents not being submitted or incomplete information. He appealed to all to use the website for information, to be patient and respectful in airing complaints, and to keep dialogue open. This brief note was quickly followed by delicious refreshments, during which time the staff and the Consul General took the time to acquaint themselves with the guests present.

Attendance on Thursday evening was larger than in the morning. This reception was attended by international diplomats from most of the consulates in Atlanta, elected officials, staff from City and State, Indian Consulate officers, their families, members of the Indian community, and media representatives. Consul Srinivasan greeted all, and invited classically trained vocalist Arati Pandya, MD, to sing the national anthems, and the audience cheerfully sang along. 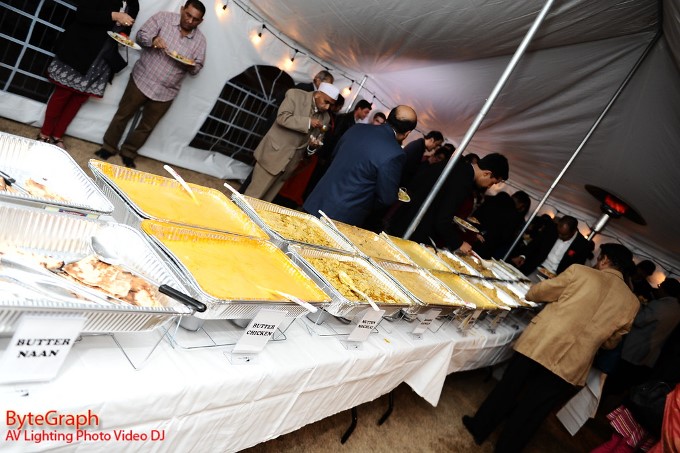 (Below) Delicious dinner at the evening reception. (Photo: ByteGraph)

Due to cold and windy weather, Nagesh Singh kept his remarks brief. “The Celebration is of the Constitution because in my view it is a fundamental document which keeps a large complex and diverse country of 1.3 billion people together. It guarantees fundamental freedoms to the people. It is not confined to only political freedoms but also gender and economic equity, liberty and justice. And that is what we are celebrating here today.” He jovially invited all to enjoy the delicious food. “I can assure you that the food is spicy and will warm you up!” 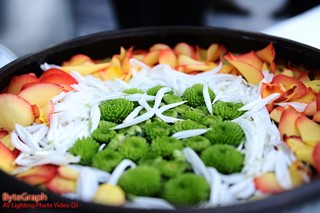 (Left) Flowers in the colors of the Tiranga, in an urli. (Photo: ByteGraph)

The delicious buffet on the Consulate lawn under the huge white tent, warmed by gas burners, was a treat indeed! At the building’s entrance, a giant brass urli filled with flowers of the colors of the Indian flag welcomed all. Long strings of lights accentuated the building from rooftop to the ground, and the glitz and glamor of attendees decked in their evening best added to the festivities. A very warm gesture on part of the Consulate gave all an opportunity to visit the Consulate itself, and get familiar with staff members for any unforeseen need. This was the first time that an event of this magnitude was staged on the Consulate property, and the personal warmth and superb staging were applauded by all present.