Home > Magazine > Around Town > India’s Daughter: from dialogue to action

India’s Daughter: from dialogue to action 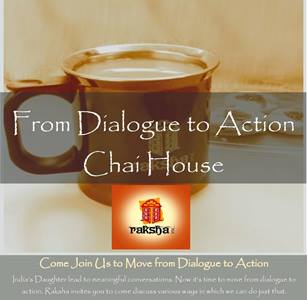 In response to overwhelming interest from attendees at their screening of India’s Daughter in April 2015, Raksha, Inc. held a coffeehouse meeting at Himalayan Spice restaurant on July 24, 2015. Over delicious Nepali chai and samosas, concerned members of the community shifted their focus from dialogue to action. The members and volunteers from Raksha presented various ways for the public to get involved in mitigating issues regarding domestic violence and sexual abuse.

Premiered at this event was Raksha’s Youth Group, which brings together teenagers and young adults from the community to promote a socially responsible generation through peer discussions, community outreach projects, and awareness-building campaigns. A parent-based focus group was also presented by Raksha as an effective means of promoting healthy familial relationships. Raksha identified this interaction between parents and children as crucial in the process of stemming malignant attitudes about domestic violence and sexual misconduct. Parents attending this event were especially enthusiastic about these initiatives and chimed in with their own personal experiences with their children and the children of their friends saying that such a program would help communicate more effectively with their sometimes estranged children.

Therapists and counselors at Raksha also provided information on resources available to members of the community who have experienced any kind of trauma. The importance of therapy in overcoming trauma and readjusting to societal life was expressed not only by the Raksha professionals, but also by many guests. Therapists from Raksha spoke in depth about their training in various forms of counseling such as somatic experiencing, a form of therapy that focuses on observing body sensations and the de-escalation of symptoms in dealing with trauma. Raksha volunteers also spoke on services like basic food and clothing donations as well as connections to legal aid that are available at Raksha.

Many other ways to get involved were discussed. The arts are a great way to advocate. Volunteers are needed to create viral videos and campaigns that poignantly spread awareness about domestic violence and sexual assault prevention, as well as about the resources available to those in need. Other ways of adding to the community effort include bringing friends and families to rallies and walks like the Martin Luther King Jr. Parade. Although Raksha does not directly lobby public interests, there are several ways of getting these needs of our community heard by the legislators and government officials. The many ways of building awareness and advocating for the rights of the members in our community showed that if there is a desire to help, there is an opportunity that suits you.

To get involved in Raksha’s work or to gain more information about any of the programs or services, please email raksha@raksha.org or visit www.raksha.org.

Raksha, Inc, is a Georgia-based nonprofit organization for the South Asian Community. Raksha’s mission is to promote a stronger and healthier South Asian community through confidential support services, education, and advocacy. Guided by values of consensus in decision-making, diversity in leadership, and the dignity and worth of every individual, Raksha strives to empower and serve the South Asian community.