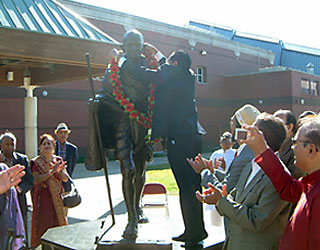 The Gandhi Foundation of USA (GFUSA) celebrated the 142nd birth anniversary of Mahatma Gandhi with a series of events including a screening of Sir Attenborough’s award-winning film Gandhi at the Atlanta Convention & Visitors Bureau Center Theater at Underground Atlanta. The main celebration marking Gandhi Jayanti was held in front of the Gandhi statue at the Martin Luther King, Jr., National Historic Site on Sunday, October 2, by GFUSA in cooperation with the King Center, National Park Service, and other partner organizations.


Atlanta’s first Consul General, Hon. Ajit Kumar, has historic ties with Gandhi. He was a Consul General with the Indian Embassy in Durban, South Africa, the place where Gandhi originated his civil disobedience movement. Right on time, he easily mingled with the attendees. Not yet officially installed as our Consul General, Ajit Kumar said that he came as a humble citizen to his first official function in Atlanta. He looks forward to serving the diaspora and is enthusiastic about the office.

In his Keynote address, the Consulate General designate shared much about Gandhi’s 20 formative years in South Africa. In 1906 Gandhi launched his first satyagraha movement in Johannesburg in the act of opposing the labor laws in Newcastle, South Africa. After using that country as a “laboratory for his experiments with truth,” Gandhi came to India in 1916 to lead the movement there. His major contribution was to bring the masses into India’s freedom movement, enabling India towards freedom. This had a profound effect in colonies in Asia, Africa, and Latin America, with the result that much colonial rule was overthrown.

Kumar said we have completed the first decade of 21st century confronted with increasing violence, religious fundamentalism, and terrorism, and for a civilization to progress the premise of Gandhi has immediate relevance—in fact, Gandhian philosophy, with its three guiding principles of ahimsa (nonviolence), satyagraha (force born of truth and nonviolence), and sarvodaya (upliftment of all), may be the key to human survival in the 21st century, as was once said by Nelson Mandela. Kumar quoted MLK, Jr.: “Christ gave us the goals, and Mahatma Gandhi, the tactics.” The question is whether we have the courage to emulate his teachings, he added.

The celebrations began around the statue with opening remarks by GFUSA Chairman Subash Razdan, followed by Executive Director Antony Thaliath. Subash Razdan spoke of the Atlanta’s Gandhi Jayanti history from 1983 and the support received from Mrs. Coretta Scott King. Representatives of various organizations present had the opportunity to bring greetings and present floral bouquets to the Consul. Greetings were also shared by Charlotte Cain of the Sweet Auburn Festival; James Griffin, a Professor of Morehouse College; Fred V-Man Watson, who has long shared harmony with the GFUSA; and a few others. Bhajans were sung by Shardaben Patel’s family. Raj Razdan spoke about the 400-member Senior Citizens Group in Atlanta, who were treated by GFUSA to a celebration lunch. A representative of the National Parks Service, Judy Forte’s office, spoke of the long and lasting relationship the King National Historic site has had with the GFUSA through the life-size statue of Gandhiji that adorns the foyer before the entrance to the King Center and which has energized relationship between African-Americans and Indian-Americans.

Syam Yellamraju announced that a play, Gandhi, is scheduled to be presented by GFUSA on January 15, 2012 during the birth anniversary of Dr. Martin Luther King, Jr. The drama is about Gandhi’s message and how it is seen through the eyes of people like MLK Jr. Plans include taking the play to various cities.

After garlanding of the statue by Consul Kumar, a traditional birthday cake was cut and shared. The bright and clear day was perfect for a solemn remembrance not only of the Father of the Indian Nation, but also of the late Dr. Giriraj Rao, Father of the Gandhi Foundation of USA. One cannot forget his contributions towards establishing the Gandhi statue at the MLK National Historic site.