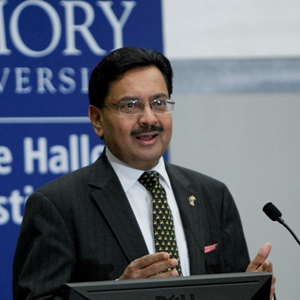 His Excellency Ajit Kumar, consul general of India in Atlanta, presented his annual discussion on India's foreign policy at Emory University's Goizueta Business School on October 31, 2013. Highlighted were India's relationships with the United States, Pakistan, and Afghanistan, its need for strategic international partnerships for innovation, and how its existing partnerships have strengthened in recent years.

The genial consul general declared that he felt "like a Hindi film hero in double roles" since he had just taken a class of Ambassador Creekmore's students, speaking to them on this same topic. He noted the numerous recent summits between India and the US, from Prime Minister Manmohan Singh's first in 2005 with President Bush to his sixth on September 27, 2013 with President Obama. In the last six months, he said, US ministers have been visiting India, discussing all areas of trade, business, investments, science, health, education, etc.

Trade is the central driver of India-US relations. India imports more American cultural products than from anywhere else. In an interesting example of synergy, a US aerospace firm reported that an Indian IT firm recently wrote over 3 million lines of code for one of their products, which are then being purchased by Indian firms. Sixty-eight Indian corporations have invested $17 billion in the US, and about a third of them have spent over $340 million in R&D, contributing to innovation in the US. 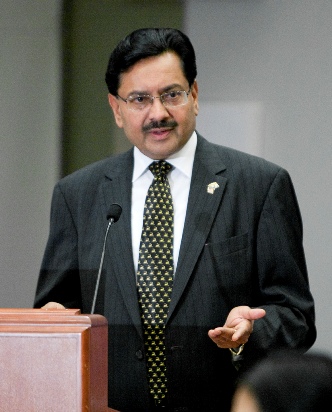 In science, the U.S.-India Partnership to Advance Clean Energy continues to grow, with revolutionary solar technologies. In health, the vaccine development program is a welcome collaboration. Dialogues are ongoing on cyber security. There is a joint working group on climate change.

As the relationship grows with the US, topics such as terrorism, defense, and investment in industry and manufacturing will be more relevant in coming years.

Much work needs to be done to bring India and Pakistan closer. India desires peaceful relations with its neighbor, and wants Pakistan to be stable and prosperous. Dialogue has been ongoing in the past few years, with liberalized visa regulations, for example. A roadmap for normalization of trade would include mutual "most favored nation" status, which India granted to Pakistan in 1996 but which Pakistan has failed to reciprocate. Pakistan's control over its army is in question, since the border is not peaceful; Jammu and Kashmir are still part of India, he said. India has no tolerance for states sheltering terrorists and calls for Pakistan to bring the perpetrators of the Mumbai attack to justice. It is interesting to note that while Indonesia has the largest Muslim population, India's Muslim population lies between Pakistan's and Bangladesh's, in numbers as well as geography, being the 3rd largest in the world.

The consul general reminded the audience of the history of Buddhism in Afghanistan and the destruction of artifacts by the Taliban. He described India's $2 million aid program to assist in rebuilding Afghanistan's infrastructure, roads, power transmission lines, etc. India's biggest aid program to any nation includes medicine, food, scholarships to students to study in India, vocational training for Afghan women, and more.

China is also an important neighbor, being India's largest trading partner in goods as well as a factor in defense. There is concern about Chinese dams on the Brahmaputra: even during war time, Kumar said, India never stopped the flow of water.

Links:
Business Investment:
http://www.thehindubusinessline.com/opinion/india-us-in-it-for-the-long-haul/article5182515.ece and Remarks by Ambassador at the Inaugural function of the US-India ...
www.indianembassy.org/press_detail.php?nid=1985‎

Education:
There may be a slowdown of Indian students coming to the US, with factors including the exchange rate and the growth of Indian education facilities.
http://articles.timesofindia.indiatimes.com/2013-11-11/news/43928825_1_international-students-foreign-students-open-doors-report

India and the United States: A new partnership for progress---Address by External Affairs Minister at Kennedy School, Harvard October 04, 2013
http://www.mea.gov.in/Speeches-Statements.htm?dtl/22282/India+and+the+United+States+A+new+partnership+for+progressAddress+by+External+Affairs+Minister+at+Kennedy+School+Harvard

Solar Energy:
Recognizing that climate change, clean and efficient energy, and environmental protection are among the biggest challenges facing India and the United States, the Department of Science and Technology, Govt. of India through its Solar Energy Research Initiative, and the Indo-U.S. Science and Technology Forum (IUSSTF) are committed to tackling these issues by building capacity in these frontier areas.
http://www.seriius.org/