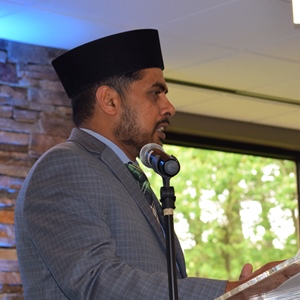 The Ahmadiyya Muslim Community–GA chapter held a Peace Symposium on Saturday, April 20, 2019. The purpose of the event was to promote peace and justice in this world and identify commonalities among different faiths. This year the theme was “Establishing Peace in the Troubled World.”

The event started with recitation of the Holy Qur’an, followed by a welcome address by the president of AMC GA, Mr. Hazeem Pudhiapura. He thanked all the guests and speakers and explained that Ahmadi Muslims reject all forms of political and religious violence. They believe in freedom of religion and the separation of mosque and state. They say their faith compels them to serve others, particularly by helping the poor, and being compassionate to those who wrong them. They believe that the second coming of the Messiah has already happened, in the form of Mirza Ghulam Ahmad, while other Muslims reject this idea and are still waiting, and the AMC is persecuted in its homeland. The current AMC leader is His Holiness the Caliph, Hazrat Mirza Masroor Ahmad.

Rabbi Lauren S. Cohen introduced Judaism by saying that salvation is closely related to the idea of redemption. God, as the universal spirit and Creator of the World, is the source of all salvation for humanity. So, redemption or salvation depends on the individual. Judaism stresses that salvation cannot be obtained through anyone else or by just invoking a deity or believing in any outside power or influence. In Judaism, redemption (Hebrew ge'ulah) refers to God redeeming the people of Israel from their exiles, starting with that from Egypt. This includes the final redemption from the present exile.

Rev. Dr. Paul Graetz introduced himself as a Christian.

Rev. Dr. Paul Graetz introduced himself as a Christian and follower of Jesus (called Prophet Jesus by the AMC), who was not Christian himself but a Jew. He explained that unity is the power, and the message of Jesus was peace. He appreciated the diversity of the attendees by saying that it is satisfying that we are not divided and worried in the thoughts of past, but actually this is peaceful where different people are sitting together to establish harmony.

Imam Yahya Luqman delivered a speech about Islam, which means submission to the will of God and also means peace with His creation. Muslims believe in and honor all the prophets, and say that prophethood has been completed with the coming of Prophet Muhammad, who represented peace and mercy to all. The Qur’an states, “Say, ‘We believe in God and in what was sent down to us and what was sent down to Abraham, Ishmael, Isaac, Jacob, and the Tribes, and what was given to Moses, Jesus, and all the prophets by their Lord. We make no distinction between any of them, and we devote ourselves to Him’” (2:137).

Mr. Hardeep Singh, representing Sikhism, said that the founder and first Guru of Sikhism, Guru Nanak, was born in the year 1469, in a village in the Punjab, a land which has gone through various religions. He noted that word guru is made up of two words: Gu (darkness) and Ru (light), since a religious leader brings you from darkness to light.

A video clip of Peace Symposium UK 2019 was shown wherein keynote speaker His Holiness Mirza Masroor Ahmad said, “The world stands in desperate need of peace and security. This is the urgent issue of our time. All nations and all people must come together for the greater good and united in their efforts.”

The session ended with silent prayer and refreshments. Guests expressed their delighted that they were part of the event. Mayor Patti Garrett of Decatur said, “I look forward to finding out more about the Women's Only Peace Symposium. I enjoyed hearing the speakers … and learning about the ties that bind us together.”

Doreen Williams, Commissioner of Rockdale County, said, “Today's program was really insightful. I really enjoyed hearing the commonalities among the four different speakers. Also, I learned today that peace starts within yourself and then moves to your family and community.” Stephe Koontz, trans Councilwoman of Doraville, said, “I am delighted to see different faith groups getting together. Simply, acceptance is peace.”

Speaker Rabbi Cohen said, “It was an amazing experience and we need more programs like this.” Lisa Cupid, commissioner of Cobb County said that, “It was informative, and I have learned a lot about different religions and peace teachings today. It was insightful.”

Hearing directly from different faith groups brought out the fact that they all feel the need for peace to be established. The event promoted a deeper understanding of Islam and other faiths and sought to inspire a concerted effort for lasting peace.