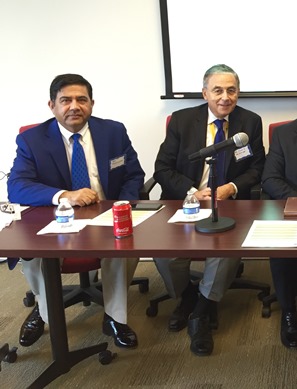 UIBS has been catalytic in working with partners to grow research and business activities. In this seminar, topics included A Panoramic View of Georgia's Entertainment Industry; Opportunities for International Companies/Ventures; Georgia's Film and Music Industry – International Linkages; Emerging Digital Entertainment; Media and Gaming Industry and Business; and Immigration and Taxation Issues.

In her keynote address, Lee Thomas—Deputy Commissioner, Film, Music, and Digital Entertainment (FMDE), Georgia Department of Economic Development (GDEcD)—said that the 2008 Georgia Entertainment Industry Investment Act provides a flat 20% tax credit on qualified production expenditures (with an annual minimum spend to qualify) and provides an additional 10% uplift if the production company includes a Georgia Promotional Logo in the qualified project. According to Ms. Thomas, Georgia had in 2015, 244 in-state productions including feature films, TV movies and series, commercials, and music videos, with a direct spend in the state of $1.7 billion, and having an economic impact of $6 billion. In comparison to this, the total economic impact during the 1973-1998 from FMDE was only $2.5 billion.

According to the speaker from Georgia Film Academy, the film industry in Georgia is booming and is currently ranked third in the nation and fifth in the world for number of productions (behind only Hollywood and New York). Industry growth over the next 3-5 years is projected to generate 4,000 – 5,000 new jobs in Georgia, most of which are on the set with average earnings of $80K.

Hon. Nagesh Singh, Consul General of India, shared the growing social and cultural importance of media and films in a complex country like India. Mr. Singh said that all media including film industry has been growing an average 10 to 15 percent in India. Bollywood industry is only about one fifth of total Indian movie industry which produces about 1,500 films a year. India has now the largest television market in the world. Magazines, newspapers and journals are flourishing in India, contrary to the trend in the US, UK, and elsewhere. Hon. Jeremy Pilmore-Bedford, Consul General of the United Kingdom of Great Britain and Northern Ireland, gave a nice overview of the growth the film industry is experiencing in UK, and the landmark success of British company the Pinewood Group in the Atlanta area.

As per GDEcD website, digital media and entertainment software is a significant element of the creative cluster for Georgia and is growing at a remarkable rate. Georgia is on the cusp of becoming the South’s Silicon Valley and offers the optimal conditions and the best talent to help companies. There was very energetic conversation in the Emerging Digital Media and Gaming industry session. The state has interest in Console Development, Online Games, Social Games, Mobile Games, Augmented Reality, Virtual Reality, and Animation & Digital Effects. Speakers from GDEcD, Turner Sports, and Global Atlanta articulated that Georgia will be seeing high waters in about 5-8 years.

Maybe in a coming decade or so, we will see the Peach State logo in films from India, Canada, and Nigeria!