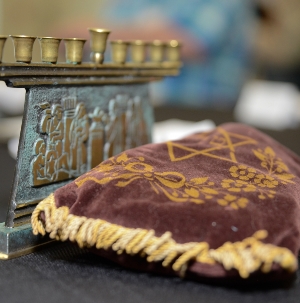 (Left) The Menorah (Hanukkah lamp), pictured here, was among the many items that were shared at the event. Many of these items are family heirlooms, passed down from generation to generation. (Photos: Naushad Virani)

Members of the Jewish and Ismaili communities of Atlanta came together for a series of interfaith events. The program gave way to a greater dialogue about their respective faiths and cultural heritage.

When a member of Temple Sinai Atlanta invited a Shia Ismaili Muslim on a trip to Israel with his congregation, it was an opportunity too good to pass up. The two men were business partners and close friends. The journey blossomed into new friendships and allow them the opportunity to further open their eyes to a faith different from their own.

The Rabbi of Temple Sinai Atlanta traveled to Israel with the congregation. “It was very lovely. We all became friends there,” he said. “We so enjoyed traveling together, that when we came back, we had a few times where we got to see each other, and we thought, we should really get our communities together.”

These meetings led to three interfaith dialogue events, that would give members of both communities the opportunity to come together to discover commonalities and forge new friendships amongst their different faiths. The Rabbi calls it a marriage of two faiths and hopes it will lead to a lifetime partnership of the faiths.

The first meeting was at a restaurant, a neutral setting for participants to meet. The two other programs were at Temple Sinai and the Ismaili Jamatkhana. Twenty-five Ismailis, along with twenty-five members of the Jewish faith, came to that "first date...getting to know each other.”

Two weeks later, the members of Temple Sinai Atlanta graciously invited the Ismaili community members to their ‘home’ for a delicious meal, engaging dialogue, and a tour of the synagogue. This time, participants were assigned to tables with individuals different than those at the first event, encouraging them to develop new relationships. Discussion prompts led to lively conversations centered on favorite books and movies that represented each participant’s faith and the opportunity to share their favorite religious holidays and traditions. The Rabbi led an informative Q&A session which allowed Ismaili participants to learn more about important rituals and practices of the Jewish faith. The visit concluded with a tour of the Temple Sinai facility. 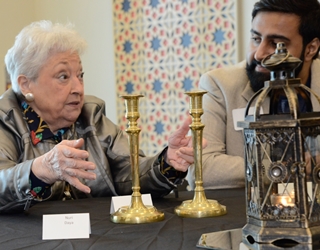 (Left) Participants were invited to bring items that held significant spiritual meaning to them. Lively discussions centered around these special items led to a deeper understanding of one another's faiths

A final meeting took place a little later. “We are now dining in each other’s homes and really turning these acquaintanceships into friendships,” says the rabbi. This time, the Ismaili community invited guests to the Ismaili Jamatkhana in Norcross, GA, for a Mediterranean lunch, learning and continued dialogue, and a tour of the facility. Participants each brought with them an item that held significant spiritual meaning to them and were asked to share their items with those seated at their tables.

Shyna Salim, who attended all three interfaith events, brought her tasbih and quickly learned she wasn’t the only one. “It was heartening to know that there were at least three other Ismailis at my table who brought tasbihs with them and had a special connection with it. Some used it for gaining strength, some used it for peace and calm, and others for an opportunity to remember Allah or Muhammad or Ali,” she explains. “For me, a tasbih is always a symbol of closeness to my Murshid, and knowing that I have his hand on my head wherever I might be physically or spiritually in my life. We explained the purpose of the tasbihs to those at our table.”

Shyna also recollected the item that Rabbi Brad had brought with him. “It was the broken glass from his wedding, from the Jewish ritual of smashing glasses by the bride and groom. Rabbi Brad explained how this ritual is meant to ward off any evil energies from the auspicious occasion,” describes Shyna. “Drawing parallels, we explained to them the ritual in traditional Indian-Pakistani weddings, where a clay vessel, a “sapathiya,” is smashed by the bride and groom after the ‘Pithi’ ceremony or upon entering the groom’s home after the ‘Nikah’ is performed.” Other items of significance included copies of the Torah and Qur’an, prayer cards, and objects that various Jewish members had kept since their own bar/bat mitzvahs. The discussions concluded with a Q&A session and a guided tour of the facility.

Shyna was grateful for the opportunity and hopes other Ismailis can participate in similar events to build bridges within the community at large. “This was my first interaction with the Jewish community in a manner that explained to me their beliefs and their customs. Throughout these events, I came to a realization that no matter how the world sees various world religions, at the crux of it all, we are driven by similar principles and similar values. We all looked different, but we really were so similar.”

The Rabbi agreed. “I didn’t anticipate hearing from the Jamatkhana how moving it was to their hearts or how many members of Temple Sinai would email me saying thank you and that this is exactly what they needed. I underestimated how much people would feel that they needed to create a different narrative, a narrative that’s not based on xenophobia but based on really wanting to build bridges.” He hopes participants will continue to connect with each other.

“I think it takes courage to say yes to an invitation like this. It takes character to continue beyond. And the same courage that you need to muster up to have this first conversation, my hope is that it continues to feed us and inspire us for a long time to come,” says Rabbi Brad. He adds, “I don’t want this to be the end of anything. I want this to be the story we tell about how our communities first got to know each other. And at our 25th, 35th, and our 50th sort of ‘wedding anniversaries’ of our communities, that we continue to speak about this for years to come.” 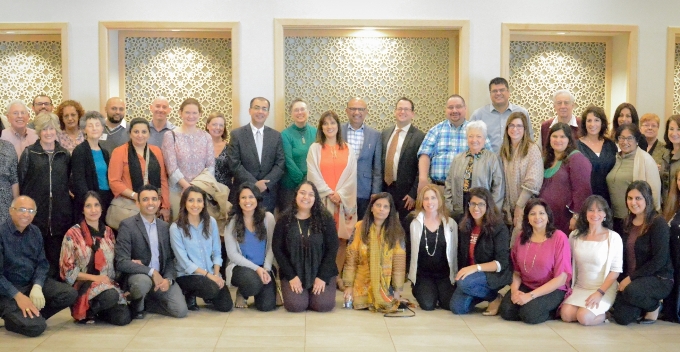