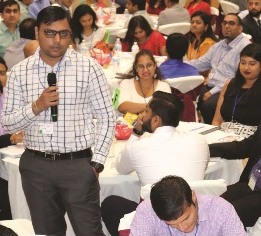 On August 10-11, 2018, the first Gujarati Hindu matchmaking event was held at Gokuldham, Atlanta, GA. There were 218 youngsters looking for a partner who attended, as well as their parents; they came from 30 U.S. states and even from Dubai and the U.K.

As well as being a Hindu vaishnav temple, Gokuldham Haveli organizes cultural events to serve the Hindu community in the Southeast USA. As part of this effort, Gokuldham teamed with the Brahman Samaj of Georgia and Charotar Leuva Patidar Samaj of Atlanta to organize a Jeevan Saathi (life partner) matchmaking event.

On the first day, an ice-breaker was held to introduce the young single men and women to each other. This was followed by a dance and garba entertainment.

On the second day, one-on-one meetings let the singles get to know each other. There was meeting of parents as well, since a marriage is not just between man and woman but even their families, and that makes the marriage successful.