Joyous Ganesh Utsav Celebrations at the Hindu Temple of Atlanta 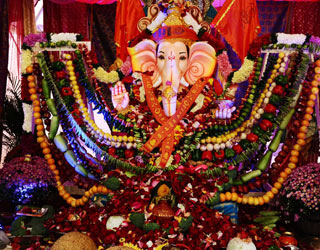 Lord Ganesha is widely worshipped as the god of wisdom, prosperity and good fortune and traditionally invoked at the beginning of a new venture or challenge. He is also revered as vighnahartaa (remover of obstacles). To celebrate Ganesh Utsav, the Hindu Temple of Atlanta in Riverdale, Georgia, (HTA) organized a spectacular, 11-day festival from September 16 to 26, 2015, which attracted hundreds of devotees from Atlanta, and places as far as Phoenix, Pennsylvania, and Florida. As in the previous year, the majestic nine feet Ganapathi idol was specially made in Hyderabad for the Hindu Temple and installed in the specially built canopy between Balaji and Shiva temples for the celebrations.

The majestic nine feet Ganapathi idol was specially made in Hyderabad for the Hindu Temple. (Photo: ByteGraph)

The Ganesh Utsav celebrations began with puja at both the Balaji Temple and the Siva Temple on September 17, 2015. The idol of Lord Ganesh was a sight to behold, resplendent in rich adornments, artistic décor, and lavished with fresh vegetable, flower, and fruit garlands.  Through the 11-day Utsav, the elaborate rituals, archanas and chanting of shlokas and Ganesha mantras were meticulously performed by priests.

Prior to the Utsav, HTA conducted a Ganesha idol-making craft workshop for kids on Sunday, September 13, along with Hindu Swayamsevak Sangh (HSS) volunteers Radhikaji, Nandaji and Shailendraji.  HTA supplied materials and instructions to over 1,000 kids to make environmentally friendly clay Ganeshas. The puja for these handmade Ganeshas was performed on September 19th.

This year saw many Indian organizations actively participating as volunteers and engaging in  day-long cultural performances and entertainment. These presentations were emceed with verve by Vikas Anand Goyal, Srivalli Daruri, Vaisheshi Jalajam, and Gayathri Jattipatti.

Nita Singh (HSS) presented an engrossing dance drama entitled Ganesha Purana. Spectacular fireworks sponsored by TANA lit up the skies above the Hindu Temple and wowed all the onlookers. 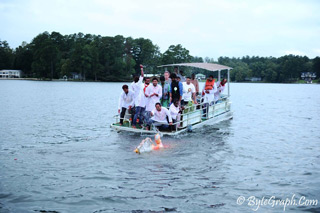 Natya Jyothi School, under the leadership of Jyothi Chintalapudi performed Ambashtakam and Ganesha Pancharatnam. Saraswathi Music Academy, with their Guru Swathi Kari, led the audience into singing some uplifting bhajans and classical songs. Lasya Priya performed an energetic dance on Ganesha with her own modern composition of a traditional song.

Swapna, Meenal and Anurag from Maharashtra Mandal sang bhajans. Revathy-garu performed a most soulful rendition on Ganesha. Natya Abhinaya under the leadership of Sridevi Dadithota performed dances and also gave the audience a few lessons.

TATA group offered a medley of devotional songs. Shiv Institute of Dance and Kalaivani Academy performed to upbeat songs on Ganesha. The lively garba raas by the ladies of Gujarati Samaj evoked much applause. On September 20, 2015, the Chinmaya Atlanta Balavihar performed Ganesh Chaturthi puja inside the banquet hall.

The climax of each day’s festivities was undoubtedly the Maha Mangala Aarathi, performed with deep reverence to the beating of the drums and traditional nadaswaram.

The last day of the Utsav, Saturday, September 26, dawned with an incessant drizzle. That however, did not deter the enthusiasm of hundreds of devotees, guests, and visitors who thronged to the temple to participate in the culminating Ganesh Nimajjanam ceremony. The temple chefs Ramakrishna and Srinivasan had prepared three enormous laddoos (Ganesha’s favorite delicacy!) weighing 25, 15 and 10 lbs. respectively. The laddoos were sold to the highest bidders during a lively, exuberant auction conducted by Amitabh Sharmaji and distributed to devotees as prasad.

All through the festival, devotees relished Maha prasadam provided by HTA, besides a delectable spread of Indian food. On September 26, 2015, this was supplemented with tasty fare from Swapna, Maruthi and Udipi restaurants whose participation and community involvement was greatly appreciated.

It was time to bid farewell to Lord Ganesha. A long motorcade with full police escort accompanied the Lord as he left for Lake Jackson. Here, Ganesha was ferried to the middle of the lake and as hundreds of devotees watched from the decks and two other boats nearby, Ganeshji’s nimajjanam ceremony was performed with great fanfare. Joyous shouts of Ganapati Bappa Moriya! rent the air with wishes for his early return the following year.

President of the HTA, Dr. P. B. Rao, offered heartfelt thanks to a host of volunteers and their families for devoting countless hours to make the celebrations a grand success. The Hindu Temple of Atlanta recognizes and deeply appreciates the tremendous efforts of the many organizations, enterprises, individuals and media partners whose collective efforts made the event so memorably fulfilling.