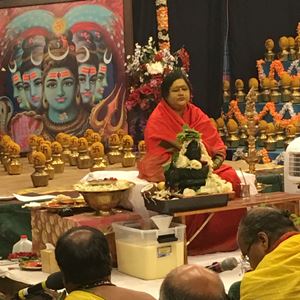 On Wednesday, May 3, 2017, Karunamayi Amma along with members of the Sikh Study Circle were volunteering at Metro Atlanta Task Force for the Homeless in downtown Atlanta, serving a vegetarian dinner to homeless men: vegetarian biryani, pasta, salad, bread, banana, a cookie, and water were offered. In the background Amma’s CD Maha Mritunjaya Mantra was playing. Chanting mantra while cooking and serving creates a positive vibration. Food thus cooked and served helps those who eat receive positive energy, which helps strengthen mental energy. Guru Nanak’s teachings also emphasizes this: Jo Chakay Tera Naam Japay, those who eat food that is seeped with prayers draw closer to God. 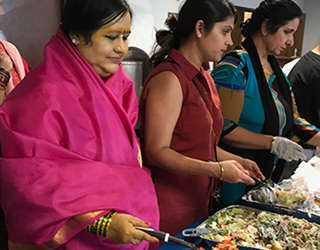 After serving about 300 men, Amma met Executive Director Anita Beaty, who shared her concerns about the homeless as the city of Atlanta wants to abolish the building to create a better image for the corporate world.

Amma then sat for a few minutes to bless and listen to those who wanted to talk with her. She blessed a young man whose birthday was being celebrated, and advised him that serving the community and all mankind is very important and he should do it.

Thursday, May 4 was Individual Blessing Day, when Amma met many individuals whom she blessed one on one. People had an opportunity to get advice or guidance for problems that they were going through. Many went just to be blessed and express their gratitude and love. Showering compassion and the love of a mother, Amma sometimes says something that is on your mind that you didn't express aloud. Divine saints come to help us unload our burden.

In a special interview with Khabar, Amma expressed that her expectation from this homa is peace for the world and especially for women and children who are going through challenges, human trafficking, drug addiction. During these programs the cosmic flow of energy is increased. Amma is disappointed that after all the talks at the UN, companies are still not addressing the issue of paying equal salaries to men and women who are performing the same job. Amma is in favor of men taking up some of the women’s tasks as woman are already doing men’s jobs. She emphasized that being on a spiritual path from the beginning helps one to become more confident and self-reliant and helps us to be balanced in all areas of life: family, career, friends, and spiritual life. She explained the need to develop inner silence and forgiveness: without forgiveness there is no life; we have to forgive in order for us to make our family and friends develop understanding hearts.

The events concluded on Mother’s Day—a beautiful way to celebrate Mother’s Day and express our gratitude to Karunamayi Amma, which means Compassionate Mother.