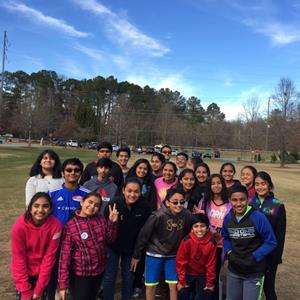 ​It was a cold, winter day on January 2, 2016, but that didn’t stop the kids at their 3k race at East Cobb Park in Marietta. “Kids Help Kids” had organized the event to respond to the tragic flood disaster in Chennai, India. They are donating all the proceeds to Sewa International USA. (*See addendum below.)

The large Indian community in Marietta gathered at the neighborhood park, ready to run, eat, and mingle. Along with the run, the kids had organized a bake sale of samosas and veggie puffs, cookies and brownies. They also had wonderful pottery and jewelry for sale. The kids had approached many businesses and five had sponsored the event. With a total of 128 people (72 adults and 56 kids), $3000 was raised, making this a grand success according to the kids.

Kids getting ready to run!

Veda Balaji, a freshman at Lassiter High School in Marietta, started “Kids help Kids” organization in 2013 while she was still in middle school, along with her brother Amit and her four friends, Vishruth Madhusudhan, Varsha Ramachandra, Sarayu Ramachandra, and Dhanya Inamdhar. So far they have organized fundraising events for the Oklahoma tornado disaster in June 2013, Philippines typhoon in November 2013, promoting girl education in June 2014, and now for Chennai flood relief. The founders are dynamic young kids who along with having fun have collected close to $10,000 from all their events. Today, the organization has over 20 volunteers, all kids, doing community service and growing every day with more dedicated volunteers such as Gaurav Krishnan, Aditi Shekar, Urvi Gupta, Tejas Veedhulur, and many more.

Posted 1/29/16.
2/16/16 Addendum: Severe rain days came to an end in Chennai, with 269 deaths and thousands of people without shelter. The rapid urbanization of Chennai has left infrastructure and storm drainage in a poor state. Pollution that collects on the ground along with standing water makes a breeding ground for mosquitos and dangerous epidemics. Lastly, poor governance and the low elevation make flooding inevitable for the city of Chennai. Repairing homes and buildings, and getting rid of the diseases and bugs that are breeding will prove to be a challenge for Chennai even after the floods.