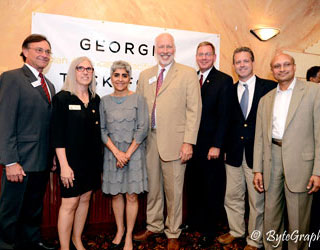 Kiran Ahuja was honored by many, including mayors of various cities around Atlanta. (Photo: Bytegraph)

Georgia Governor Roy Barnes created the AAPI (Asian American and Pacific Islander) commission in 2001 to serve as a liaison between the Governor’s Office, other state government agencies, and the private sector, to attract international business and create jobs while also helping smaller, minority-owned businesses and advising on issues of healthcare and education. Barnes’ successor, Governor Sonny Perdue continued the AAPI commission. However, even though the AAPI population has grown by over 83% since 2000, current Governor Nathan Deal has not renewed the appointment of the commission.

To lobby for a new AAPI commission, the Georgia AAPI Taskforce hosted its first Legislative Day at the Georgia State Capitol on February 28 this year with about 300 Asian-Americans attending. To raise funds to host an even bigger event in 2014, Kiran Ahuja, a Georgian now serving the White House as a Presidential Appointee, Executive Director of the White House Initiative on Asian Americans and Pacific Islanders (AAPIs), came to bolster the efforts.

City of Norcross Mayor Bucky Johnson and City of Snellville Mayor Kelly Kautz both presented Ms. Ahuja with “keys to the city.” City of Duluth Mayor Pro Tem Marsha Bomar recognized Kiran Ahuja for being an outstanding Georgia citizen through a proclamation Kiran Ahuja welcomed by Georgia Legislative Day Taskforce that she presented Kiran. City of Suwanee Mayor Jimmy Burnette presented a proclamation making June 27 a day for “inclusion and prosperity for all.” Cities of Auburn and Lilburn each presented resolutions to honor Kiran Ahuja. Other officials present were Georgia House of Representative Pedro Marin (D – 96) who read out a proclamation by the Georgia Secretary of State, as well as Consul Generals of India and Korea, Hon. Ajit Kumar and Hon. Min-woo Lee. Collectively all voiced support for electing an Asian-American Commissioner for the State of Georgia who would champion the issues for Asian-Americans at the Capitol. 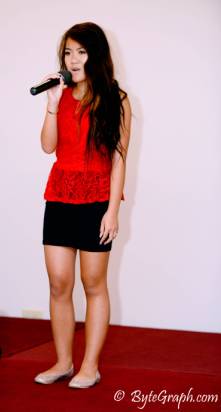 Miss Indy Malaythong, a young Laotian-American, sang the American National Anthem to thunderous applause followed by a brief but high energy speech by Rep. Pedro Marin. Besides the seriousness of the content in his message about inclusion and the challenges for it, he humorously declared that he was bilingual, binational, and bifocal, before he pulled out eyeglasses to read his notes. 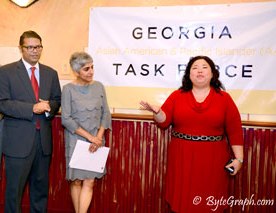 Farooq Mughal, one of the core team members of the taskforce, spoke next, individually recognizing diverse community leaders who truly champion rights. He introduced Viren Mayani as a community leader, who emphatically stated that he was presenting, not introducing Kiran Ahuja, as she was back at home in Georgia and no stranger to our communities. Viren listed some of Ms. Ahuja’s major contributions at the White House and the nation at large, as well as Georgia specifically.

Kiran Ajuja’s remarks highlighted the importance of inclusion of all members of society. She spoke of the changing demographic in America, noting, “The South is transforming and we are growing richer in experiences and opportunities because of its diverse population.” She challenged many of those present to take action, asking, “As public servants, we need to ask ourselves ‘How do we respond to this immigrant growth? How do we address the unique needs of these communities?’” Ahuja spoke about education and immigration, and acknowledged work done by Asian Americans in Georgia. As executive director of WHIAAPI, she is focused on her commitment to ensure that all AAPIs have access to government services. She closed her speech with words spoken to her by President Barack Obama as he recommissioned the White House Initiative: “No community should be invisible to its government.” 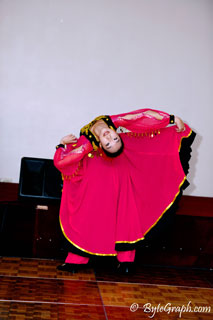 A Chinese traditional dance (left) performed by a member of MorningStar Dance Academy, and dancers of the Prem Studio (right). (Photos: Bytegraph) 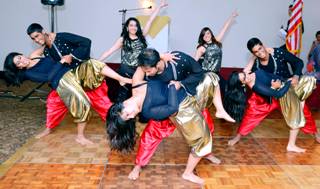 Performances by the award-winning Chinese dancers of the MorningStar Dance Academy as well as Indian-American Bollywood-style dancers of Prem Studio were a huge hit. Neera Bahl and Tim Hur were emcees, sound was by Shyam Brahmbhatt, and photography by Bytegraph.