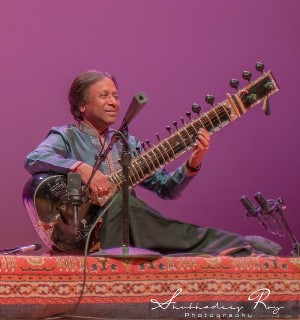 Kennesaw State University (KSU) has grown to more than 35,000 students and is not just accepting diversity but celebrating it: 2017 is its “Year of India” and on Saturday Oct. 14, 2017 it presented a classical North Indian concert called “Ragas under the Stars” with sitar maestro Ustad Shahid Parvez Khan, along with Atlanta’s classical music instructors at the Pt. Jasraj School of Music, brothers Pritam and Prithwiraj Bhattacharjee. The concert was a benefit for Prayas, an Atlanta-based nonprofit that supports education for the disadvantaged.

Ustad Shahid Parvez Khan is one of the greatest sitar players alive today, known for making the sitar emote and sing the notes. Innovations with the ages old classical instrument, his legacy of genius virtuosity combined with the improvisations he has made to sitar strumming, make him a global giant in his field. He maintains a rigorous international schedule to awe his fans and has founded a music academy to expand awareness of the genre. 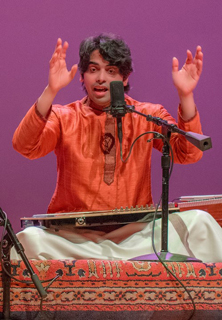 Brothers Pritam and Prithwiraj Bhattacharjee have acquired a mastery over their skills at a very young age. Pritam trained under Sangeet Martand Pt. Jasraj, and Prithwi is a disciple of the late Ustad Allah Rakha and later Ustad Zakir Hussain. Together they mesmerize audiences with their talents. 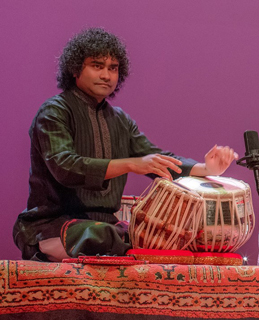 The brothers performed for the first half of the program after being introduced by KSU’s Global Affairs Director, Dan Paracka, and colleague Dr. Pamila Dembla, who greeted them with bouquets. The opening was with two compositions in raga Rageshree: “Aali Ri Palakan Laagi” in Vilambit Ek Taal (12 beats rhythm cycle in slow tempo) and “Mora Man Bas Kar Leeno” in Drut Taal (16 beats rhythm cycle in fast tempo). The contrast between the two tempos brought out the extensive range of nuances within the Indian classical music and at the culmination of the faster tempo the audience got to see the speed at which Pritam could modulate the singing along with the tabla beats. It was a treat that got the audience to their feet in applause. The concluding selection was in raag Mishra Kaafi with the song “Jaao Jaao Mose Na Bolo Kanha” set to Madhya Drut – Ek Taal (12 beats). Though the audience wanted more, after a short intermission, Ustad Shahid Parvez was on stage to present another versatile instrument of the Indian classical music.

Khansaab started with aalap (solo adlib playing) in raag Jog, followed by three compositions: gat in Madhya Vilambit Roopak Taal (7 beats rhythm cycle), followed by a Madhya Drut Ek Taal (12 beats) and finally Ati Drut Teen Taal (16 beats of very fast tempo). The audience did not want him to leave, and he obliged. His concluding composition was a dhun in raag Khamaj set to Madhya Drut Dadra Taal (rhythmic cycle of 6 beats). He simply wowed the audience who applauded him with a standing ovation. 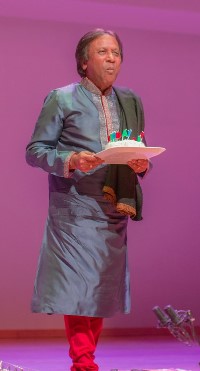 The event’s main sponsor Mr. Salim Jetha had brought a birthday cake on the stage to present to Khansaab, who stood holding the cake while the audience sang Happy Birthday to him. “Raagas under the Stars” was a hit with the campus and the community, and there’s more to follow later in the year.