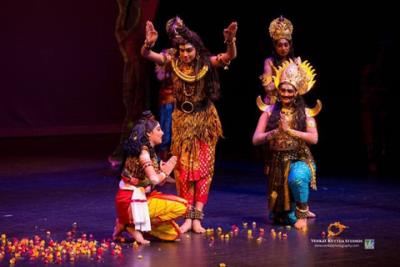 Atlanta donors once again rose to the challenge and raised record funds to the tune of nearly $75,000 for Sankara Nethralaya OM Trust, a nonprofit organization that provides free eye care for the indigent in India. Bhakta Markandeya, a Kuchipudi ballet presented by the Srivaani Kuchipudi Dance Academy, was staged to a sold out audience at the Infinite Energy Center for the Performing Arts on Sunday, May 1, 2016.

Dr. Seshu Sarma and Vijay Vemulapalli of Vibha guided the production team every step of the way ensuring the grand success of the program. The keynote speaker for the event, Dr. Bhagirath Majumdar, a retired professor from Emory University School of Medicine gave an overview of the power of the Panchakshari Mantra and emphasized the importance of bhakti or devotion. 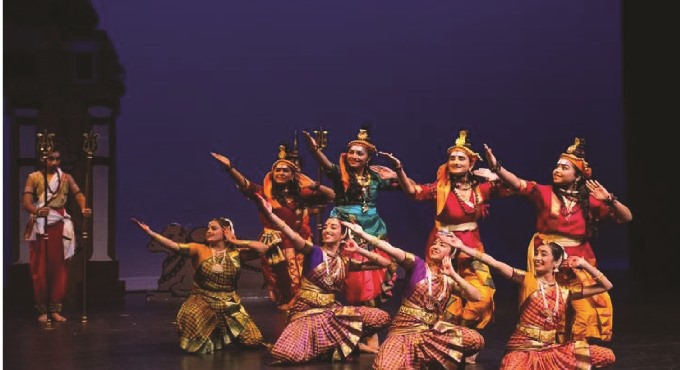 What followed was a feast to the senses: the 10 scene ballet started with the customary prayer to the Guru, Padma Bhushan Dr. Vempati Chinna Satyam. The 60 dancers and the orchestra dazzled the audience with color, costumes, melody, beat, and graceful movement, bringing to life the story of Markandeya and his bhakti.

The folk dance by the Jangama devaras and the celestial dance of Siva and Parvathi set the tone for the rest of the ballet. Sage Mrikandu and his wife Marudhwathi’s penance and prayer to Lord Siva was beautifully depicted. The melodious repetition of “Om Namah Sivaya” and Markandeya’s display of his devotion to Lord Siva was deeply moving. 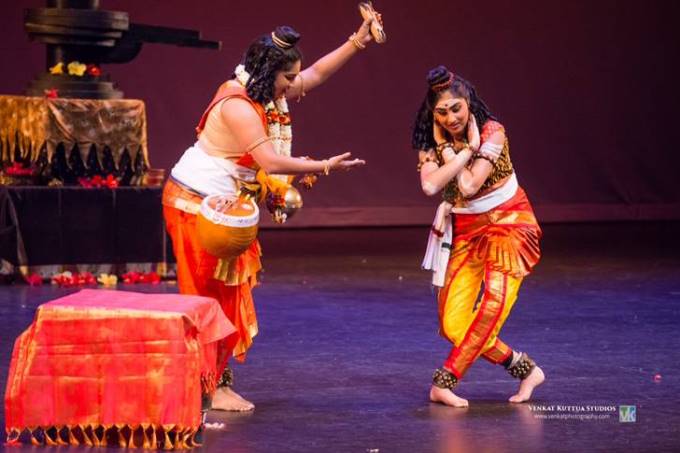 Several other significant events during the life of Markandeya were depicted with grace and devotion even as the emotions of the performers were accentuated beautifully by the orchestra.

The audience was enthralled from start to finish. Smt. Revathi Komanduri is not only a great dancer and teacher but also a phenomenal choreographer.

Thirteen-year-old Shivaani Komanduri as Markandeya, and Rashmi Kondur as Yama stole the show with the tremendous maturity they brought to their roles. The script for the Bhakta Markandeya Kuchipudi Ballet was composed by Dhandibhotla Narayanamurthy of India and the music was composed by Subhashini Krishnamurthy of Atlanta. The stage was managed by Syam Yellamraju. 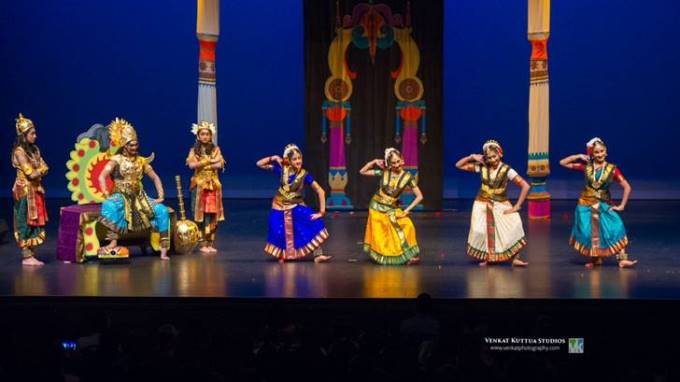