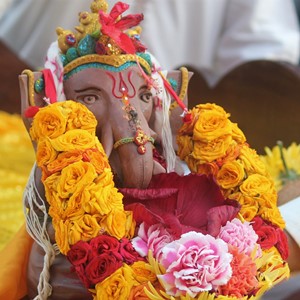 On Saturday, September 7, 2019, an all-day event was organized by Maharashtra Mandal Atlanta (MMA) at Sumant Center of Ambaji Shakti Mandir in Lake City, Georgia. In the hallway were booths that sold Indian clothes, jewelry, arts, and crafts. A beautiful Ganesh idol at the entrance with beautiful rangoli welcomed everyone. On one side of the hall an altar was created where members could offer their prayers and aarti to Ganesh ji. 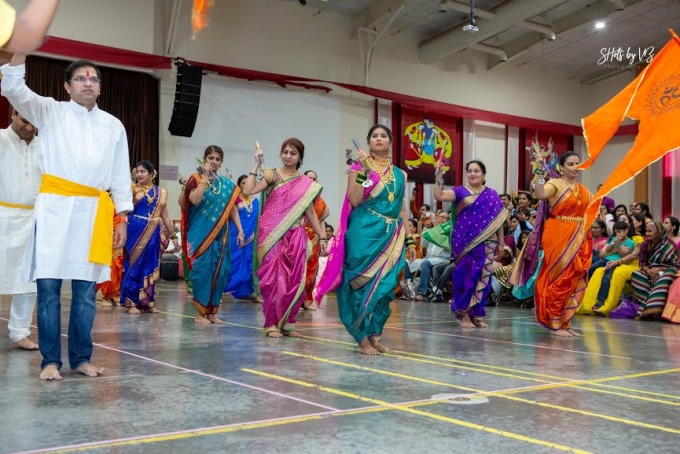 Most of the ladies wore traditional Maharashtrian style sarees and jewelry. Peacocks and elephants were part of the pattern of weaves, and jewelry displayed the authentic antique style. (3 Photos  above: Vaibhav Bhosale)

President Rachana Kanvinde shared the theme of this year—Go Green—to help the community become aware of the issues of environment, right from the Ganesh murti that would be immersed, to serving food in biodegradable, compostable products that would help the environment. Community members were very supportive by stacking all the plates and bowls and disposing of spoons and napkins in a separate trash can. 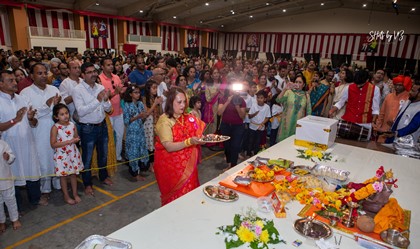 The morning started with Ganesh pooja, followed by a maha-aarti chanting various songs. The afternoon lunch was scrumptious, traditional Marathi cuisine with poori, alu baingan, bhindi masala, daal, pakora, and the highlight—delicious, warm modak filled with coconut, jaggery, and ghee, and tea. Children seem to enjoy modak and taking pride in how many they could eat: 2, 3, 4, 8, they shouted out when Rachana asked the audience if they enjoyed the modak served. 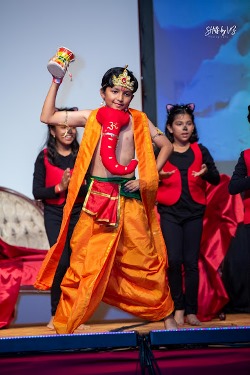 The cultural program included a play enacted by community members young and old, which was very well scripted, bringing in the roles of old and young and in-between age groups. It was entertaining and educational, addressing problems of wasting money on decoration, and bringing awareness of going green while narrating the story of the journey of Ganesh ji. Dances and a musical band were incorporated, creating a festival of colors for the eyes. 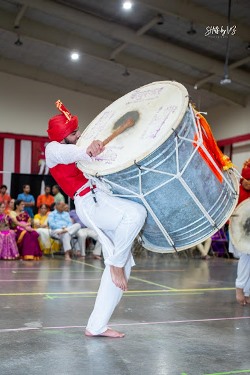 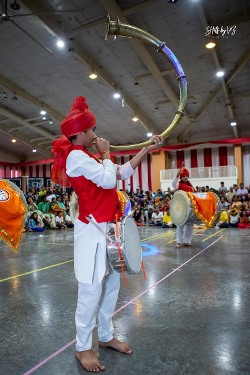 (Below left and right) Members of the Dhol Tasha group playing the drums for a ceremonial departure for Bappa. (Photos: Vaibhav Bhosale)

In the evening, Ganesh ji was placed on a decorated palanquin and there followed the traditional group of “Lejhim and Dhol Tasha.” Lejhim was performed to a fast upbeat music number by kids from 4 years old to teens and adults. Dhol Tasha was performed with vigor to the sounding of drums and led the procession culminating in Ganesh ji’s visarjan.

Sponsor: AoPS Academy was part sponsor of this event and had a booth.

History: This celebration was popularized by Lokmanya Tilak in 1893 when he praised the celebration of Sarvajanik Ganesh Utsav in his newspaper, Kesari. He dedicated his efforts to launch the annual domestic festival into a large, well organized public event. This was his way of uniting people from different castes and classes against the British rule. The festival is widely celebrated in Maharashtra with pomp and show which started in the city of Pune. Other states that participate are Karnataka, Telangana, Andhra Pradesh, and Tamilnadu.