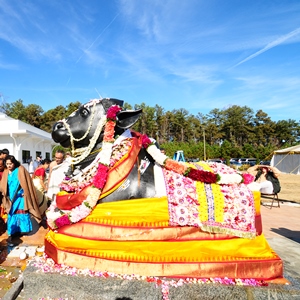 Sri Viswayogi Viswamjee Maharaj, who was touring U.S. cities on a mission of universal integration and peace, was in Atlanta from December 3-11, 2014. Devotees from across the USA joined him to celebrate Datta Jayanthi on December 5-6 at the Hindu Temple of Atlanta, Riverdale.

Datta Jayanthi is observed on the full moon day in the month of Margasheersh or Margashira maasa to celebrate the birth of Guru Dattatreya, Adi Guru, guru to gurus, the Trimurti Avatar—the united and single incarnation of Brahma, Vishnu, and Shiva.

On both days, rituals were performed for universal integration and peace. Evening cultural activities included dramas that conveyed the message of unity and peace through Kuchipudi and Bharatnatyam dances performed by children. A recorded presentation on Swamiji’s message was shown. The “Viswaguru Stotram” in Kuchipudi style choreographed by Sasikala Penumarthi and performed by her students was a highlight. 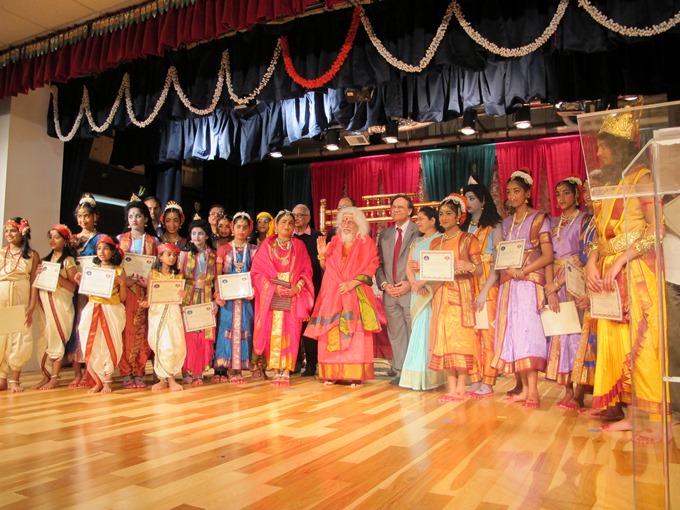 Youth and children would play an important role in bringing peace to the world, Swamiji said. “Good human values need to be inculcated in children and youth. The USA is a mini-world and my annual visits to this country are mainly to strengthen the youth and children. They should be told about the divine will of yogis, and siddha purushas who dwell in the Himalayas,” he added.

On the second day, New York oncologist Dr. Nori Dattatreyudu and his wife Dr. Subhadra lit the lamp to mark the start of the evening program. There was a Kuchipudi dance on Lord Krishna choreographed by Jyothi Chintalapudi and performed by her students; a presentation on Swamiji’s “Divine March for Universal Integration & Peace” by Sanjay Rao, Raleigh NC; and a Carnatic music recital by Kala Vasudevan, and other devotees.

Swamiji spoke about the importance of Datta Jayanthi, that on this day the universe was created due to Divine Will. He said that the human body is the temple of God, the heart is the altar of God, and that this is the proclamation of Sanatana Dharma. He spoke about the importance of doctors and their role in the society and declared Datta Jayanthi 2014 as Doctor’s Day. He said that the essence of Sanatana Dharma and the Vedas is to make the human body and mind peaceful and powerful, and in turn be useful to make society and communities peaceful and powerful. There is no bigger pooja or yagna, he said, than serving humanity and society. He spoke about the importance of a guru in one’s life and praised the efforts of local dance and music teachers to spread Indian music and culture in society. “A guru takes upon himself the bad karma of others, thus gets rid of its effect on society,” he added. The day’s program was concluded with Uyyala Seva being offered to Swamiji.

Dr. Nori Dattatreyudu, who is Chairman and Director, oncology, Queens Hospital, and Chairman, International Advisory Board for Viswayogi Institute of Medical Sciences (VIMS) was presented a lifetime achievement award. A leading authority and a pioneer in oncology, Dr. Nori has provided technical and scientific help to many cancer centers in India, South America, and Israel, and is also the Founding Member of the Indo-American Cancer Institute for Women and Children, a state-of-the art 450-bed cancer and research institute in Hyderabad, AP, inaugurated by the Prime Minister of India in 2001. Dr. Nori is a consultant to the United Nations International Atomic Energy Agency, advising on the formulation of guidelines for the treatment of cancer in developing countries. 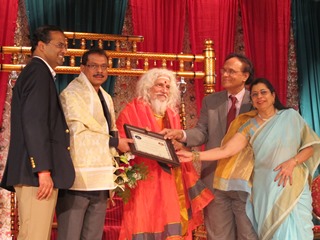 Swamiji also graced the occasion of two installations: the giant 6-ton Nandishwara carved from a single black stone (see the photo at top of report) and brought from India for the front of the Siva temple, and the 35-foot brass-covered renovated Dhwaja Stambha in front of the Balaji temple.

[The article above appears only on the website for February 2015, not in the print/digital issues.]

Sivananda Nyayapathi:
the latest Khabar report on this artist is in this February 2015 issue,
http://www.khabar.com/magazine/community-newsmakers/sivananda-nyayapathi-wins-portrait-society-of-america-award

Shiv Aggarwal:
the latest Khabar report on this active citizen is in this February 2015 issue,
http://www.khabar.com/magazine/community-newsmakers/shiv-aggarwal-receives-award-in-india