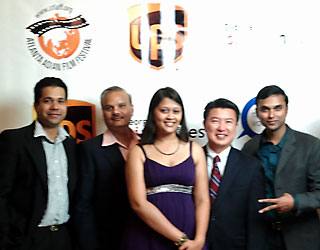 Atlanta’s first ever Bollywood production, Mumbhai Connection, was screened October 13th at the 7th edition of the Atlanta Asian Film Festival (AAFF) at Georgia State University’s Cinefest theater. A feature film by local production company Rafiki Media and director Atlanta Nagendra, the movie was the only South Asian entry in the festival, and a strong contender for the AAFF Jury Award. Attended by a diverse group of Atlantans, the movie garnered rave responses from the audience.

Mumbhai Connection is a crime comedy revolving around technology and the mafia, and features an almost all-local cast and crew. Several well-known members of the South Asian community in Atlanta have contributed to the making of the movie. Well-known Atlanta area landmarks are also prominently featured.

A 3-year production effort, Mumbhai Connection is now being screened at film festivals. According to lead actor and producer Rafiq Batcha, “We are pleased with the film festivals we have been selected at. We won the Best Comedy Award at the Third World Independent Film Festival in California this year and were runners-up in the Feature category at the Urban Mediamakers Film Festival as well. And of course, we are contenders for the Best Film Award in the AAFF. We have already had screenings at five film festivals so far and are being shown next at the BronzeLens Film Festival, November 10-13 [in Atlanta]. We are excited!”

The movie narrates the travails of a young Indian IT salesman, Faisal, who is fired from his job and in the throes of desperation, until a friend he meets at a party lands him a sales position at a new IT company in Atlanta. Only to find out that he now has to sell IT to the Atlanta mafia! Faisal’s very life is in danger as he is forced to sell what no IT salesman has ever sold before. Exactly what he ends up selling and how he gets out of this mess forms the rest of this movie. Much hilarity ensues and it involves an “item number” by none other than India’s leading playback singer, Sunidhi Chauhan.

At the AAFF premiere gala dinner, the attendees were amused and curious to watch the movie. Mr. Li Wong, organizer of the AAFF said, “Upon screening of the trailer, there was a buzz of the screening of the film at Cinefest. We look forward to cheering for the ‘Atlanta Mafia’ to win this year's AAFF Jury Award.”

Atlanta Nagendra, director of the movie, adds, “This is not another culture-clash story about Indians in the U.S. It addresses the topic of job loss that many of us have experienced through the current recession while also bringing in an element of the absurd (or maybe not!) of the mafia and IT services. After all, even the mafia needs IT services!”

As the tagline of the movie says, to “Boldly go where no salesman has gone before,” you can visit www.mumbhaiconnection.com for more information.