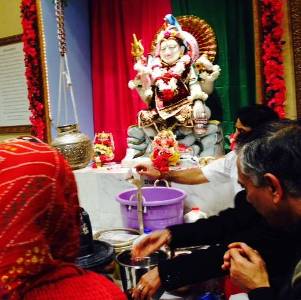 Mahashivratri, the Great Night of Lord Shiva, an auspicious and important festival for Hindus, was celebrated with great enthusiasm by the devotees in Shree Mandir, Mableton on Thursday, February 27, 2014. Many devotees kept on coming for abhishek of Shivlingam the entire day and night. In the evening, a samuhik (group) pooja was performed in which many families participated; Mahamritunjaya Mantra was chanted by the congregation along with recitation of Lord Shiva’s many names. Long lines of devotees, offering abhishek, was a sight similar to that at many Hindu temples on the Indian subcontinent. Throughout the night, holy mantras were recited and special pooja ceremonies were performed for Lord Shiva.

Numerous mythological stories pertaining to the celebration of Mahashivratri are mentioned in Hindu holy scriptures. In one version, devotees believe that Mahashivratri is auspicious because it marks the marriage ceremony of Lord Shiva and Parvati. However, many believe that Mahashivratri signifies the auspicious night when Lord Shiva performed the tandava (cosmic dance) that led to the creation, conservation, and destruction of the universe. In another version, Lord Shiva drank halahal (poison) during samudra manthan (churning of the ocean), thus saving the planet Earth from getting the poisonous effects.