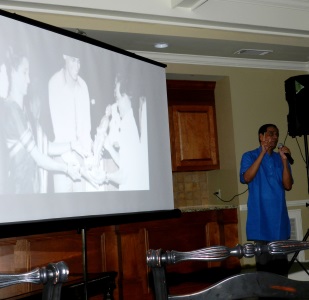 Two very unique audiovisual programs were conceptualized and presented in Alpharetta by Mr. Anand Deshmukh of Pune, India. Mr. Deshmukh is highly active in the cultural circles of Pune and has anchored Pune's prestigious annual Sawai Gandharv Sangeet Mahotsava for over 25 years. Mrs. Mukta Gokhalay and Mr. Rajesh Joshi of Atlanta were instrumental in organizing these programs for invitees on August 2 and 22, 2015, respectively.

“Main Har Ek Palaka Shayar”:
Based on the life of one of Hindi cinema’s most iconic poets and lyricists, this show takes viewers on an unforgettable journey through the life and times of Sahir Ludhianvi. Sahir was slightly different from his contemporaries. His pen was, at its best, pouring out bitter but sensitive lyrics over the declining values of society, the senselessness of war and politics, and the domination of materialism over love. Sahir’s life is full of strange incidents which are reflected in his songs.

Anand Deshmukh took the viewers down memory lane by screening some of Sahir’s unforgettable songs, such as “Abhi na jao chodkar,” “Zindagi bhar nahi bhulegi,” “Chalo ek baar,” and “Main zindagi ka saath,” in their original form. The songs along with Mr. Deshmukh’s golden words paint a vivid picture of Sahir’s troubled life in front of the viewer as they are transported back in time to the golden age of Hindi cinema. The original script, penned and narrated entirely by Mr. Deshmukh, gives the audience a window into Sahir's life story in a very intense way. Mrs. Kunda Deshmukh assisted in presenting the program.

“Unforgettable Sudhir Phadke” or “Julalya sagalya tya aathavani”:
Sudhir Phadke, better known as ‘Babuji,’ was an iconic singer and composer from the Marathi music industry. Anand and Kunda Deshmukh have been very fortunate to possess a rare videorecording of Babuji’s live concert in Pune in 1986. For the first time, Babuji sang several Bhavageeta and songs from Marathi films along with his own interesting narration in front of a live audience. Mr. and Mrs. Deshmukh recoded this concert on a single camera and have painstakingly preserved the original recording. They were glad to share this precious recording of Babuji with fans from Atlanta.

Both shows were tremendously appreciated by the audience. Mr. and Mrs. Deshmukh were grateful for the love and interest shown by music lovers in Atlanta and look forward to opportunities to showcase these and other programs. Contact: deshmukh.anand49@gmail.com, deshmukh.chitra@gmail.com

[The article above appears only on the website for September 2015, not in the September print/digital issues.] [Posted 9/16/15]