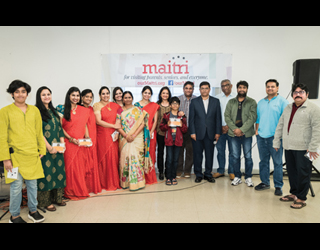 The event was kicked off with a prayer by Rajyalakshmi Vudatu, one of the founder members of Maitri. This was followed by a welcome note by Viju Chiluveru, the founder of Maitri. He gave an overview of the organization’s mission statement and what prompted him to start this organization.

Founder members, artists and volunteers were recognized with a shawl and memento. “We all work hard and achieve our goals, but we do not know how to celebrate our accomplishments. Maitri is one organization that organizes events to recognize every winning moment of people in the community,” said Phani Dokka as he accepted a memento. About 45 members, artists and volunteers, who were recognized at this event, made equally heartfelt statements about the organization.“Pure, consistent and selfless service right from the day of its establishment”, is how Narender Reddy, a well-known community leader and political activist, described Maitri’s efforts at the event. 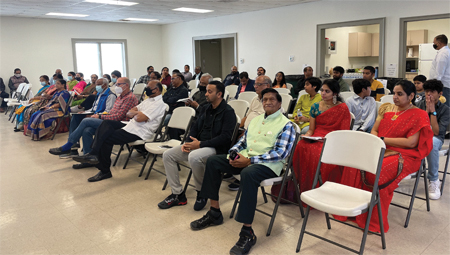 Narasimha Rao Oleti spoke on behalf of the members and said, “There cannot be a more satisfying thing than being a part of such an organization. I have been with Maitri for over a decade and now it is a part of my life”. Subbarao Vudathu, Prabhakar Kadiyala, Raviprakash Musini, Subbarao Maturi, Narasimha Rao Oleti, Srikrishna Gouranga have been with Maitri since the beginning. Members who passed away over the past decade were remembered at this event. Organized by Shilpa Uppuluri and Krishna Rallabandy, a 30-minute music segment paid tribute to Sirivennala Sitarama Sastri, a noted lyricist who passed away recently.

Neelima Gaddamanugu, Director of Nataraja Natyanjali Kuchipudi Dance Academy; and Ram Durvasula, a well-known senior artist, received Dr. P.V. RaoMaitri Award for Arts and Literature. This award was initiated in 2013 after the passing away of Dr. Venugopala Rao who had been a well-read person and friend of the community for over 50 years in the U.S.

Ram Durvasula, who has organized several concerts for Maitri, presented a song and spoke about the milestone of the organization including the major events and important dates.

A traditional Kuchipudi dance performance by Shruthi Nuthi and Anvitha Bommireddy, students of Neelima Gaddamanugu, enthralled the audience. Rajyalakshmi Garu presented a special song written for Maitri which received a huge response from the audience.

Several leaders from Community Organizations were present at the event. Notable among those were from TAMA. Nagesh Doddaka and Sairam Karumanchi spoke about their association with Maitri. They felicitated Viju Chiluveru with a shawl. Kishan Tallapally, Janardhan Pannela, Sunil Gutoor and Jyotsna Palakurthy from GATeS organization also spoke on the occasion. Sri. Dilip Tunki of Johns Creek City Council addressed the importance of voting and his future projects. Nabhanyu Chiluveru helped in preparing the mementos and other graphic items for the event.