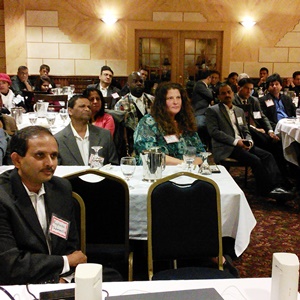 The December meeting of the Indian Professionals Network (IPN) featured as speaker, R. Srinivasan, Consul (POL) of the Indian Consulate in Atlanta, recently posted here from the Embassy of India in Addis Ababa, Ethiopia. At the Thursday, December 18 gathering organized by Mustafa Ajmeri in Ashiana Banquet Hall in Global Mall, IPN team member Ravi R Ponangi introduced the Consul, who spoke on growing opportunities in the manufacturing sector in India.

Srinivasan said that the “Make in India initiative” launched by Prime Minister Narendra Modi gives global recognition to the Indian economy; he urged the gathering to look towards India as not merely a market but as an opportunity for investment. Srinivasan said India is the only country in the world which offers the unique combination of “democracy, demography, and demand.” The government of India (GOI) is taking initiatives for skill development to ensure that skilled manpower is available for manufacturing. The “Digital India” mission would ensure that Government processes remain in tune with corporate processes. 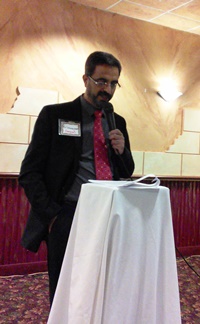 He explained various steps taken by the GOI for setting up manufacturing hubs. The 2014 budget has set a goal of 7-8 % growth over the next 3-4 years. GDP grew at 5.7 % during the last few months. Industrial growth in general and growth in the manufacturing sector in particular has shown significant improvement with growth rates becoming positive as compared to negative growth rates in these sectors in the corresponding period of 2013-14. FDI inflows have increased by 75 % over the corresponding period in previous year. Shares of Indian stocks have risen to a record high as S&P BSE Sensex index has gained 30% so far in 2014, making it one of the top performers in Asia. Indian shares have been rising on optimism that the new government would speed up policy changes which would help the economy recover this year. Most recent data show economic activity is beginning to rebound. In fact, after 100 days of Modi’s government, rating firm Maplecroft ranked India No. 1 in terms of economic opportunities. PricewaterhouseCoopers reported that India can grow at 9% to become a $10 trillion economy. This improvement in economic performance in last few months is a reflection of the improved business environment and market sentiment, an outcome of the series of initiatives taken by the new government to bring about positive changes to revitalize the industrial sector in general and manufacturing sector in particular.

Gujarat became an industrial leader during Modi’s 13 years as chief minister there, Srinivasan said. Manufacturing sector accounts for 28 percent of Gujarat’s economy, compared with 13 percent for the country as a whole, and a touch less than the 30 percent figure for manufacturing titan China.

We must increase manufacturing and ensure that the benefits reach the youth of our nation, he said. India and China had the same GDP and PPP in the 1990s. Since then China with its huge thrust on manufacturing has become one of the largest economies in the world.

The development of a robust manufacturing sector is the priority of the Govt. It has the potential to not only take the economic growth to a higher trajectory, but also to provide employment. The Govt. is committed to remove all bottlenecks and develop India as a manufacturing hub. “Make in India” is the government’s commitment, and an invitation to all, and a blueprint for this development. The government would do what it takes to make it a reality.

With a large, primarily young, and mostly educated population, India would be an ideal workforce, skilled and available for hire at a competitive price. Consul Srinivasan said that the Prime Minister stressed the need for increasing the purchasing power of the common man, which would boost demand and development in addition to benefitting investors. Cost-effective manufacturing and a buyer with a good purchasing power are complementary for development. Global opportunity will thrive by bringing more people into the middle class. Investors abroad have to create jobs, which would effectively mean more employment and more purchasing power.

Modi has observed that India ranks low on the “ease of doing business” and emphasized the need for “effective” governance. Missions such as “Swachh Bharat” and “waste to wealth” could lead to good revenue models for business as well. The PM has conveyed his vision of waste water management and solid waste management in 500 towns across India through public private partnership. The government is pushing projects of infrastructure of the future, including i-ways besides highways, port led development, optical fiber networks, gas grids, and water grids.

In order to make doing business in India easier, the government has evolved new delicensing and deregulation measures to reduce complexity and increase speed and transparency. Keeping in view that India’s manufacturing infrastructure and capacity for innovation is poised for phenomenal growth, new smart cities and industrial clusters, being developed in identified industrial corridors, have connectivity, new youth-focused programs, and institutions dedicated to developing specialized skills. The government in order to improve its infrastructure requirements has set up $40 billion fast-tracks in steel projects. It has cleared new Industrial Clusters for promoting advanced practices in manufacturing, Approvals were accorded to 21 Industrial projects under Modified Industrial Infrastructure upgradation Scheme with an emphasis on use of recycled water through zero liquid discharging systems, central Effluent Treatment plants. Approvals were also accorded to 17 National Investment and Manufacturing zones.

On Nurturing Innovation: approval for strengthening Intellectual Property regime in the country was given through creation of 1,033 posts, further upgradation of IT facilities, compliance with global standards, and application processes made online. 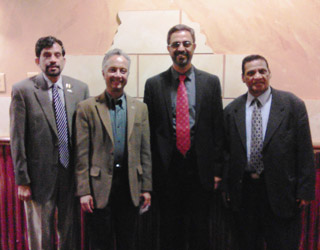 Srinivasan said the “Make in India” program represents an attitudinal shift in how India relates to investors: not as a permit-issuing authority, but as a true business partner. Dedicated teams will guide and assist first-time investors, from time of arrival. He answered questions and he asked the gathering to approach the consulate for any assistance with regard to investment in India.

Dr. Narsi Narasimhan thanked the consul and invited members to organize future such excellent meetings. IPN was founded in 1993 and offers a networking opportunity not only to the Indian community but to all living around Atlanta. There are no membership dues, and each monthly meeting is organized by a different volunteer leader.