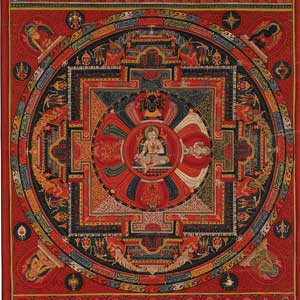 These next four months bring Atlantans a myriad of opportunities, if not to meditate on their personal path to enlightenment, at least to become more familiar with the significance of mandalas. On January 19th, Dr. Sara McClintock of Emory University’s Department of Religion led a tour through the Michael C. Carlos Museum’s new exhibit titled “Mandala: Sacred Circle in Tibetan Buddhism.” Organized by the Rubin Museum of Art in New York, a nonprofit dedicated to the art of the Himalayas, this exhibit gathers over 100 objects from  collections in the U.S., Europe, and Asia to help us experience the beauty of mandalas and explore their  function and symbolism.

The mandala, you might think, is an intricate Buddhist painting utilizing circles, squares, and images of deities—but no, it is much more! Although the word “mandala” [muhn-dl-uh] is Sanskrit for “circle,” in the Buddhist tradition it means “palace” and represents a divine place of residence, a sacred space. The mandala is in fact the environment around a being—a person’s body, a space around the body, the world, or the universe. The artistic representation of the mandala is used as a tool for meditating, a mnemonic device for the meditator who envisions himself in the palace, its decorations rich with symbolic meaning for the cultivation of different virtues on the path to enlightenment.
A flabbergasting surprise is the first thing one sees on entering the exhibit: a large three-dimensional carved palace of golden wood. Antique two-dimensional mandala paintings hanging on the walls are actually like topographical maps of three-dimensional mandalas. Also exhibited are decorated metal mandalas and other objects related to ritual ceremonies, e.g. a crown for initiation, wooden printing plates, and amulets wrapped intricately with colored strings. A computer graphic is even included to give the viewer an idea of visualizing oneself entering a mandala.
Open through April 15 (including three free afternoons), the exhibit teaches us to see the universe as a sacred space, where we can take everything as an opportunity for transformation. Supplementary programs are offered in February and later in conjunction with the exhibit: distinguished scholars from Emory and other universities will speak, author Rob Walker of the Unconsumption Project will explore desire/consumerism and identity, visiting artists will lead children and adult participants, and monks from the Drepung Loseling Monastery will create an intricate Tibetan sand mandala whose sand will finally be ceremonially poured into a nearby stream to distribute the positive energies. A four-week meditation class will even be held. Stunning photographs showing Tibetan monks painting sand mandalas will be on display at Cox Hall Computing Center until May 31; this exhibit by Myron McGhee is called “The Mind’s Eye.” (See http://carlos.emory.edu/mandala)


Besides this exhibit of traditional mandalas at the Carlos, Emory’s Visual Arts Gallery is bringing together contemporary Western artists who use the mandala form as artistic expression. Morehouse College alumnus Sanford Biggers has created a modern mandala in the center of the gallery, providing a performance space, around which paintings and other works use the mandala as a tool to address today’s physical, cultural, environmental, and cosmological issues.

In the spring a “living mandala” will be constructed across from the Museum, in the garden of Cannon Chapel. Designed by Emory landscape architect, James R. Johnson, and Buddhist monks from Drepung Loseling Monastery, the mandala, made from perennials, will become part of the permanent landscape. 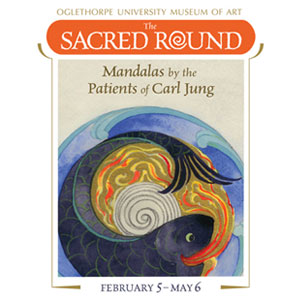 Oglethorpe University’s Museum of Art is also presenting an exhibit of mandalas created by the patients of Carl Jung, the Swiss psychoanalyst. “The Sacred Round”exhibit consists of art made during therapy, illustrating the conscious and unconscious. Docent tours discuss the place of the mandala in the creative analytical process. Various lectures complement this exhibit also. Tibetologist Glenn Mullin lectures on 2/15 about sacred power places in the world of the Dalai Lamas, along with highlights of a film by Michael Wiese, narrated by Atlanta jazzman Steve Danz. A lecture by Decatur’s Jungian art therapist Susanne Fincher on 2/24 considers the neuropsychology of human development that predisposes us to like circles and explores the mandala as an individual’s experience of personhood, as seen in the exhibit. The library at Oglethorpe University is also presenting an exhibit on Carl Jung’s life. (See http://museum.oglethorpe.edu/programs.htm)

2) Article "A masterpiece in minutes" with Video: Creation of a sand mandala
http://religion.blogs.cnn.com/2010/06/02/a-mandala-in-minutes/

4) http://ccat.sas.upenn.edu/george/mandala.html (structure of the Guhyasamaja mandala)

5) http://www.jyh.dk/indengl.htm (glossary of parts of a mandala)

7) Myron McGhee's photographs of Tibetan monks painting sand mandalas at Emory University in Atlanta, Georgia. While the monks focus their attention on the artistic elements of creating the sand mandala, they also devote their minds to meditation for the healing of the earth. Observing their sacred practice, our eyes are drawn to the exquisite beauty of their art, and our minds are inspired by their religious devotion.

This collection of photographs will be on exhibit at various venues on Emory's campus throughout the 2011-2012 academic year. The exhibit is curated by Juana Clem McGhee and made possible through generous support from the university and other organizations in the Atlanta area. For more details, visit the following website: http://www.emory.edu/mandala