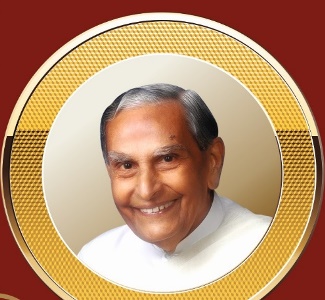 On Sunday, July 15, 2018, communities gathered at the Carter Center to celebrate the life of Rev. Dada J. P. Vaswani and his legacy of love. Noted spiritual leader and educationist Dada Vaswani—the moral force behind the Sadhu Vaswani Mission and a tireless promoter of vegetarianism and animal rights—had passed away Thursday morning at the age of 99, days short of his centenary. He was an an acclaimed orator, author, spiritual leader, and philosopher with millions of followers across the world. The Sadhu Vaswani Center seeks to bear witness to the truth that there is but One Life flowing in all: men, birds, animals, things animate and inanimate. 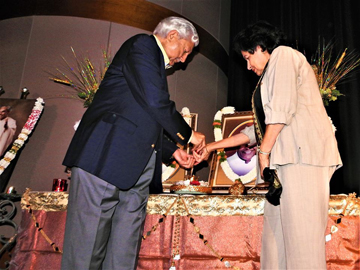 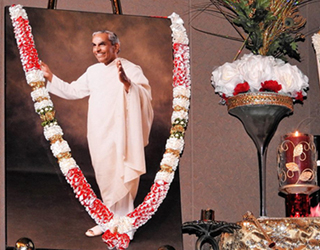 (Right) A garland adorns the image of Sadhu Vaswani for his memorial at the Carter Center.

Tanweer Mian and his musical group entertained the crowd with his devotional singing as a tribute to Dada’s teaching to remember God in every moment of life. Highlights of 2017, with messages and Dada’s meetings with various world leaders, were shown, leaving the audience to reflect on the beautiful life that Dada had created and the footprints he left for many to follow.

Geeta Mehrotra shared her last satsang in Pune on March 9, 2018. Dada’s message was that the purpose of life was to overcome our negative tendencies and purify ourselves. For example, envy and competition: Often we are envious when we are able to achieve like others, but fail to do so as we have not sown the seeds in the field of life. Remembrance of Name divine is the highest seed that we can sow in the field of life that will help us overcome negative tendencies and prepare for the journey beyond. Dada through his life and messages has shown us a path of moving from competition to contribution and finally offering everything to the Lord.

The bittersweet event included a medley dance mix choreographed by the talented and beautiful Shilpa Ailani Jadwani, with songs penned by Dada: “Love Anthem” and “Thanksgiving Anthem.” The program was beautifully orchestrated, and Dada's presence at the program was felt by many.

Every family received a gift bag with an inspirational book by Dada J. P. Vaswani, a commemorative candle holder, and a souvenir book.

Pledges for the Moment of Calm were collected: At 2pm local time on every August 2 around the world, including at SVCA, a Moment of Calm is observed for 2 minutes, and prayers are said together to forgive and seek forgiveness, to breathe out an aspiration for peace and love. People pledge to participate in this way: in fact, 1,87,48,881 pledges (one crore, eighty seven lakhs, forty eight thousand, eight hundred and eight one) were collected by Sadhu Vaswani Mission, Pune in honor of Dada’s 99th birthday.

The program concluded with videos of Dada’s last rites and the bhajan “Dada Shyam Sharanam Namah.” Several events remain in the centenary year.

Video:
"Highlights of 2017 with Rev. Dada J.P. Vaswani," ​shown at the event.
https://www.youtube.com/watch?v=8y6EpryXNsg