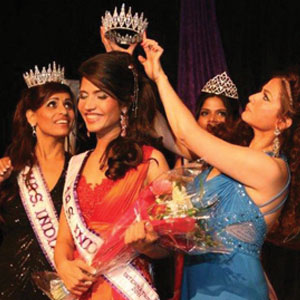 In a well contested finale on May 28, 2011, Richa Sharma of Kolkata, India was crowned Mrs. India International 2011 at the 14th Street Playhouse of Woodruff Arts Center in Atlanta. Richa is elated to be India’s ambassador and feels honored to represent India at the Mrs. International Pageant.

Karli Bose of Charlotte, North Carolina and Akshita Jain of San Jose, California were declared first and second runners up after two days of close competition.

The other finalists at the event were Mrs. Bipasha Bhattacharya of Orlando, Florida, and Mrs. Dimple Kriplani of Grayson, Georgia. Mrs. Sheetal Gupta, a finalists from China, could not attend the event in person.

Mrs. India International promotes the family values of respect, compassion, honesty and tolerance; she showcases the achievements of international married Indian women. The new winner says, “I want to use this platform to help underprivileged children. Once the show is done I do intend going back to teaching.”