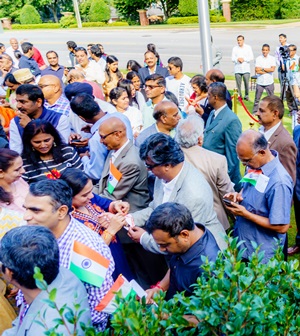 (Left) During the Consulate celebrations, five ladies tied rakhis on five randomly selected men on the day of the Rakhi festival, which fell on India's Independence Day this year.

The Consulate of India for the Southeastern United States celebrated India’s 73rd Independence Day on the consulate lawns on August 15, 2019, to a large gathering.

As is customary, the tricolor was bound and raised to its flagpost loaded with rose petals and at the appointed time, the attendees sang the Indian national anthem, “Jana Gana Mana.” On the chants of “Jai Hind” the Consul General, Dr. Swati Kulkarni, unfurled the flag with rose petals showering down.

The newly installed bust of Gandhi had a good view of the Independence Day celebrations and the unfurling of the tricolor on the front lawn of the Consulate this year.

Consul Shailesh Lakhtakia thanked the crowd for their presence on an early Thursday morning. Consul General Kulkarni read excerpts from the speech that Ram Nath Kovind, President of the Republic of India, gave on the eve of India’s 73rd Independence Day. His message included the following:

“Dear Fellow Citizens, I offer you my greetings on the eve of our 73rd Independence Day. This is a happy and emotional day for all children of Mother India, whether living at home or abroad. We remember with gratitude the countless freedom fighters and revolutionaries who struggled, strived and made heroic sacrifices to win us our freedom from colonial rule.

“We complete 72 years as a free nation at a very special juncture. In a few weeks from now, on October 2nd, we will celebrate the 150th birth anniversary of the Father of our Nation, Mahatma Gandhi, the guiding light of our successful effort to liberate our nation and of our continuing effort to reform our society of all inequities.

“This year also marks the 550th birth anniversary of one of the greatest, wisest and most influential Indians of all time—Guru Nanak Dev ji. He was the founder of Sikhism, but the reverence and respect he commands go far beyond just our Sikh brothers and sisters. They extend to millions of others in India and across the world. My best wishes to them on this pious occasion.

“In this backdrop, I am confident that the recent changes made in Jammu-Kashmir and Ladakh would be of immense benefit to those regions. They will enable the people to access and enjoy the same rights, same privileges, and same facilities as their fellow citizens in the rest of the country. These include progressive, egalitarian laws and provisions related to the Right to Education; accessing public information through the Right to Information; reservations in education and employment and other facilities for traditionally deprived communities; and justice for our daughters by abolishing unequal practices such as instant triple talaq.

“As the President of India, it is my privilege to travel all over our country, to our diverse states and regions, and meet fellow Indians from all walks of life. Indians can be very different in their tastes and habits, but Indians share the same dreams. Before 1947, the dreams were for a free India. Today, the dreams are for accelerated development; for effective and transparent governance; and yet for a smaller footprint of government in our everyday lives.

“Over a hundred years ago, the inspirational poet Subramania Bharati gave voice to our freedom movement and its expansive goals in the following lines in Tamil:
We will learn both scripture and science
We will explore both heavens and oceans
We will unravel the mysteries of the moon
And we will sweep our streets clean, too.

“With that, I once more wish you and your families all the very best on the eve of Independence Day.”

Dr. Kulkarni also observed that the festival of Rakhi fell on Aug 15th this year. To explain and celebrate the Rakhi festival she had randomly selected five gentleman to get rakhis tied from five ladies. That was done in a festive style before she invited all attendees to gather inside for refreshments.

This Independence Day observance was well executed and superbly attended.

Various other observances were also held during the month.

The Indian American Cultural Association celebrated the 23rd Festival of India (FOI) on August 3, 2019, to mark the approaching Independence Day at the Infinite Energy Center in Atlanta. Mr. Asim Kumar, Consul & Head of Chancery, Consulate General of India, Atlanta was the Chief Guest on the occasion. Mr. Kumar addressed a gathering of about 3,000 people who attended the event. He also awarded plaques of honor to the persons nominated by IACA for contributing to the growth of Indian culture and bringing about dynamism in the IACA. The event was marked by dances, debate competition, fashion show, and musical performances. Many stalls showcasing the Indian Culture, art, and heritage had been set up on the occasion. The Consulate General of India had set up an 'Incredible India' stall at the venue to publicize places of tourist interest.


There was also a flag march with a long “flag.” Designer Rohit Verma displayed his fashion collections. Before the festival, he had declared, "I am excited to be at the illustrious IACA Festival of India. Taking my Indian flag to Atlanta while representing my Indian culture and art gives me immense pleasure. A special thanks to Kamleshji who invited me and the entire team of IACA.”

Speaking about the collection, Verma revealed, “I’ve used different Indian fabrics such as hand-woven Khadi and cotton to represent the true essence of India on the runway. The collection will portray my emotions for India….It’s a great honour to be representing India at the India Day Parade. Jai Hind!”

3) IACA FESTIVAL OF INDIA 2019 (Trailer)
Jyothsna Hegde
Published on Jun 24, 2019
Welcome to Festival of India 2019 presented by IACA! Celebrate India’s independence in a style that celebrates its glorious past and its extraordinary future. Celebrate it the with the organization that has represented the Indian community for more than 40 years !!…..IACA has been a trail blazer in celebrating India’s Independence day for the past 22 years with FESTIVAL OF INDIA. It now continues that tradition this year with a FESTIVAL that’ll be bigger and better than ever….lots of options for the entire family in a fun and relaxed environment….a petting zoo for kids, Bollywood celebrities, Political dignitaries, Health and wellness seminar, blood donation camp and the best quality cultural items that Atlanta has to offer and of course a wide array of shopping and dining options to whet your appetite. Join us! Celebrate our culture, our freedom….in our festival….FESTIVAL OF INDIA
https://www.youtube.com/watch?v=gXGpNGQxzo4​