Muslim Community of Greater Atlanta celebrates birth of the Prophet 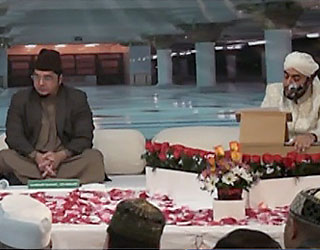 The fourth annual mawlid conference recently held at the Ashiana Impact Hall at Global Mall in Norcross, Georgia, on February 2, 2013 was a huge success according to the Muslim Community of Greater Atlanta (MCGA) president Farooq Ahmed. About five hundred people attended the free conference and dinner. This year’s theme was the character and peaceful teachings of Prophet Muhammad, who was an example for all, irrespective of background or class, of moral standards and striving to do good for this life and the hereafter.

The conference was addressed by world renowned speaker Dr. Jamil Rathore (photo at left), a medical doctor and eminent Islamic scholar who has appeared on religious channels, e.g. Geo TV, ARY Digital, and QTV. He gave an insightful talk and recited verses of the Holy Quran in his eloquent voice.

World famous nasheed reciter and hafiz Muhammad Ali Soharwardi (photo on right) was the other star attraction of the conference. He has gained fame through his naat video clips on TV. Mr. Soharwardi gave an exceptional and moving performance that brought some to tears.